This lecture (from page 130) shows manipulation of the buck-boost converter model into canonical form.

I am stucked at moving current source through transformer as in the picture below or from the lecture.

I know where the scaling factor D'come from but what make me confused is that how can we do that with current source in parallel with the secondary winding of the transformer.

For me, the method only works if the current source in series with the secondary winding of the transformer.

The method is from the fact that input power is equal to output power, where:

However, as from the picture, the current source is in parallel not in series with secondary winding of the transformer. So how does the method work in this case?

Edit: My question now is that how do you determine the current direction after pushing the current source to the input side of transformer? 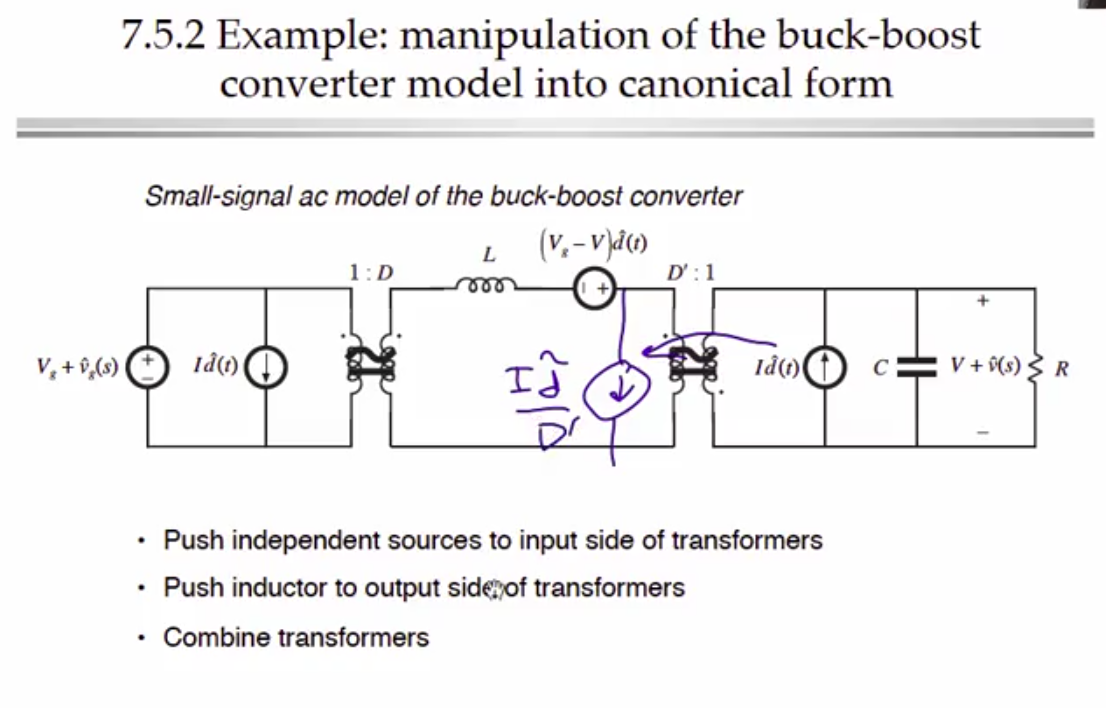 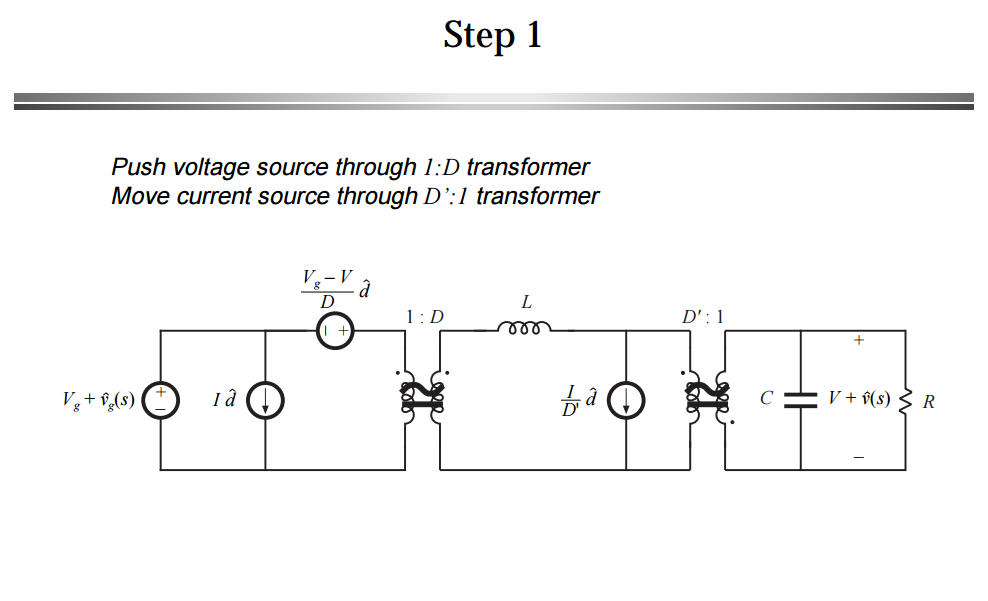 My question now is that how do you determine the current direction after pushing the current source to the input side of transformer?

It has to do with the dot convention for transformers.

In order to stay consistent with the passive sign convention and the polarity of the transformer, you probably want the current in the rightmost loop to go into the capacitor and the load resistor.

Then, if you look at the current ratios in the image I added, there is a positive and a negative ratio:

The positive case for the ratio happens when one current goes into the dot and the other leaves it. So they go in different reference directions.

In your small signal model, the ratio being used is positive which means that one current has to be leaving the dot and the other one has to be entering the dot.

In your case, you also (probably) want to stay consistent with the passive sign convention as well (PSC), which means you want the current going into what you labeled as the positive sign of the capacitor and resistor. That is: 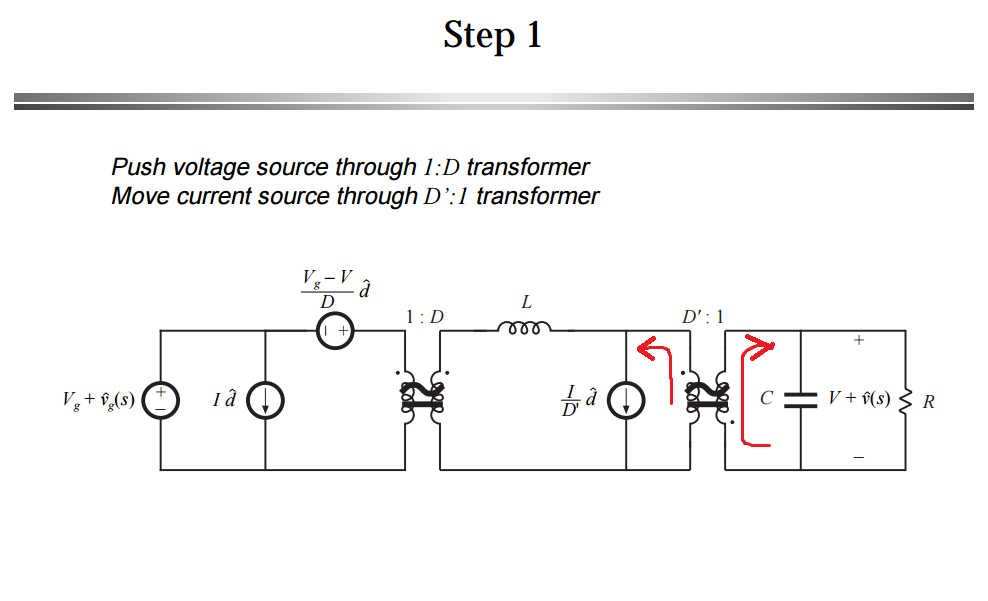 So in order to meet both requirements:

The current being pushed to the left has to be leaving the dot so that the current on the right, enters the dot and consequently enter the positive side of your load.

In other words, you try to stay consistent with the positive sign convention first (on the load side and this makes the current enter the dot), but that forces you to choose the opposite reference direction for the other current (left side of transformer, current has to leave dot), so that you also comply with the sign of the ratio.

ADD: Just to clarify the concerns of the OP with regard to the need of the Passive sign convention.

It's not necessary to follow it, but it makes equation less tractable. There is a reason they labeled the upper side of the resistor as + and that is: To write KVL and KCL assuming that the current goes into the positive terminals of the capacitor and the resistor. That way, everyone is happy and you do not need to worry about signs.

If the current flows into the negative terminal, you have to manually keep track of the signs by having to put a negative sign in front of any equation that relates current and voltage (e.g \$I_C=-\dfrac{dV}{dt}\$, \$V_R = -IR\$). It makes things messy.

Another thing, I used the same power electronics book where that circuit came from, when I was in school. It's Fundamental of Power Electronics 2nd Ed. If you go to page 250, that's in chapter 7, this is what it says: 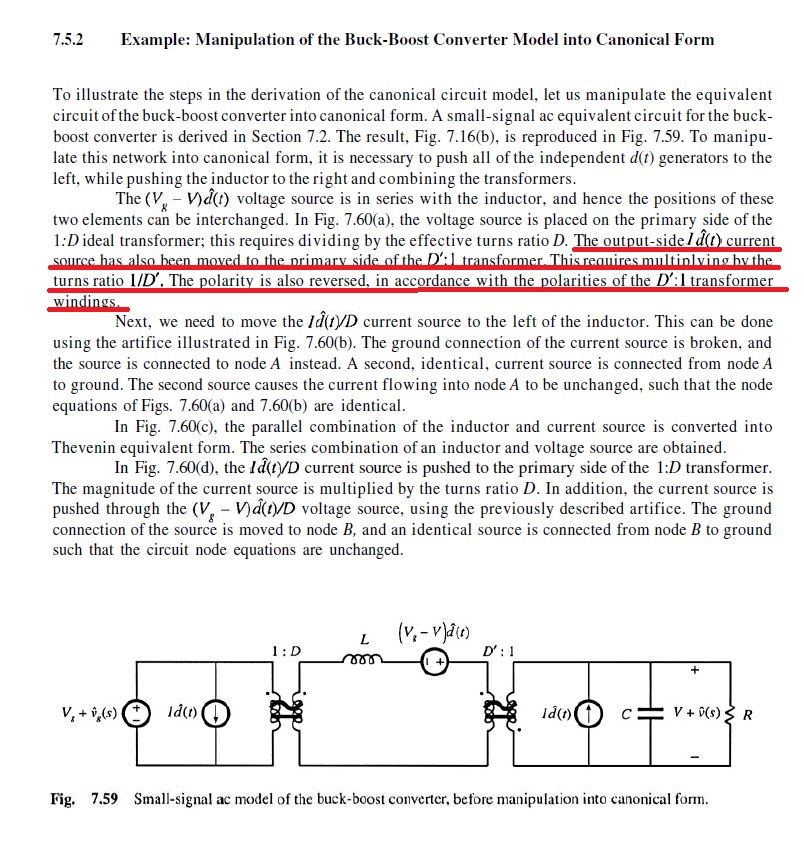 I hope this helps in some way or maybe someone can give you a different perspective.

Think of a KCL at output + node. You have three currents summing up to build secondary current (generator, capacitor and load), say
\$i_\text{sec}=i_\text{G}+i_\text{C}+i_\text{R}\$.

I think the simplest way to handle reflecting the current source is to follow these 2 points:

1) Recognize that wherever we put the current source it should have the same affect on the circuit.

2) Current into a dot on one side of transformer produces current out of dot on other.

So, applying that approach:

A) If I remove the current source I have to replace it with current from somewhere. In this case it will be the current shown in red from the transformer. As such, the load is still happy (KCL on node satisfied).

B) If I have the red current flowing INTO the dot on the secondary, then I have to have a related component of current on the primary flowing OUT of the dot. This tells me the direction of the new current source arrow will be down.

A similar thought process allows you to move independent voltage sources across the transformer as well.

1) Recognize that wherever we put the voltage source it should have the same affect on the load.

2) The voltage source will either increase or decrease voltage to the load.

So, applying that approach to a simple example:

A) The independent voltage source adds with the leftmost voltage V to INCREASE the voltage applied the primary, VP.

I hope I haven't muddied the water. This is just the clearest way I have to work through these problems.

Not the answer you're looking for? Browse other questions tagged circuit-analysis switch-mode-power-supply dc-dc-converter power-electronics modeling or ask your own question.

5
Winding method for barrel wound secondary center-taped EE core
1
AC-model of Integrated Boost-Flyback converter
0
Derivation for average value input current in buck-boost converter
1
How to Model a Transformer in LTSpice
0
High Frequency Transformer Configuration for an Electronic Circuit Voltage Supply
1
How to test the maximum secondary current of a step down transformer?
1
Half Bridge Voltage Waveform not Following PWM
0
Finding the primary VA when winding your own power transformer?
0
How does flyback converter with two MOSFETs work?