Simulating a thermopile on the bench — is this a reasonable/reasonably accurate way to do it?

Most people know about 24V HVAC control systems, as that's what's commonly found on furnaces, heat pumps, central air conditioners, and other such systems. If you have electric unit or radiant heat, you may have seen line-voltage thermostats as well that run directly on mains voltage.

However, there is a third type of control system for gas valves, the so-called "millivolt" system. This system uses a device called a thermopile made of many thermocouple junctions in series to produce a control voltage on the order of 500 to 750mV when heated by the pilot flame. This is enough to operate a gas valve through the contacts of a manual switch or mechanical thermostat. This system has the advantages of being intrinsically safe (the system won't attempt to run at all if the pilot's not lit) and self-powered (it needs no external AC supply to work), so it's most commonly found on gas fireplaces.

An example thermopile is the Honeywell Q313 series; we can assume that its specs are representative.

However, if you want to test this type of system, a problem arises. Running a gas valve with all the ports open to outside air won't hurt it, as far as I know. However, I don't know about your workbench, but mine is not rated for the temperatures needed to get such a thermopile to generate its rated output!

So, in order to mess around with making a timer, fancy-thermostat, etal that works with such a system, or to test theories about suitable switches, you need a thermopile simulator. In the past, I built one according to the below schematic (with Roffset = 54.9kΩ, a 20kΩ single turn pot for Radj, and Rseries selectable between 1.5Ω and 3.6Ω) and it appeared to produce reasonable results, but I never was able to fully test it with an actual gas valve, and do not have the constructed unit at hand any longer. 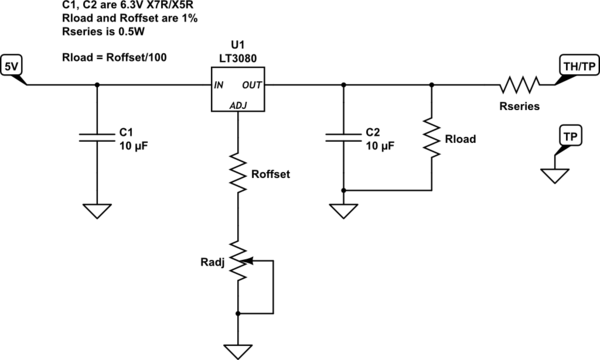 Is this a reasonable/reasonably accurate simulation of a gas valve control thermopile under steady-state operating conditions, assuming that my open-circuit voltage and series resistance are chosen to match the specifications of an HVAC thermopile (for the Honeywell linked above, I'd be setting up the LT3080 as before, but with an Rseries of 2.87Ω)? By "reasonably accurate", I mean that if I took 100 random, known-good millivolt gas valves, and attempted to operate them "on the bench" with this rig, 99 of them would operate normally for say, at least 10 on-off cycles of operation.

To obtain a definitive answer, I recommend that you obtain the 100 gas valves and or their data sheets, find and average their optimum operating characteristics(requirements), and determine their standard deviation.
Design your simulator to provide the average optimum parameters and allow an adjustment equal to 3x the standard deviation. This guaranties that you will be able to adjust your simulator to meet the particular requirements of any given gas valve.

Not the answer you're looking for? Browse other questions tagged voltage-regulator thermocouple testbench or ask your own question.

0
Is this a good way to power my camera?
2
Why are the output voltages way too high on this stacked LM317 circuit?
14
How do I size the output capacitor for a DC bench power supply?
0
the proper way to wire up multiple supply rails
1
Is this an appropriate way to test a 7805?
1
Should this cold-junction compensated thermocouple-to-digital converter (MAX31855) output an accurate temperature?
1
Does the MAX31855 thermocouple converter output accurate temperature values?
1
How do I implement the clock into this testbench?
2
Programmable Power Supply Design: Issues with variable load and voltage stability