Why is root mean square used when calculating average power, and not simply the average of voltage/current?

Now leave the voltage on all the time but make it 5V. Average voltage is still 5V, but the average power is only 25W. Oops.

In reality to calculate power in general you have to integrate (instantaneous voltage) * (instantaneous current) over a period of the waveform to get the average (or from 0 to some time t as in your example to find the power over some interval).

If (and it's a big if) the load is a fixed resistor R you can say that v= i*R, so instantaneous power is i^2 * R and so then you can integrate i^2 over the period to get the "RMS current", and multiply by R later (since it's fixed it doesn't enter into the integral).

RMS current is not particularly useful if the load is something nonlinear like a diode. It can be useful in analyzing losses in something like a capacitor with a given ESR. The losses (and resulting heating effect which shortens the capacitor life) will be proportional to the RMS current, not the average.

In short, average voltage x average current only equals average power when the voltage and current are DC quantities. Think about the following example: -

So, using average voltage x average current produces zero average power and clearly that is wrong. It is RMS voltage x RMS current that is going to give a meaningful answer (irrespective of whether it's DC or AC).

You have to go back to basics and ask yourself what power is - it is voltage x current and these are instantaneous values multiplied together. This results in a power waveform like this: - 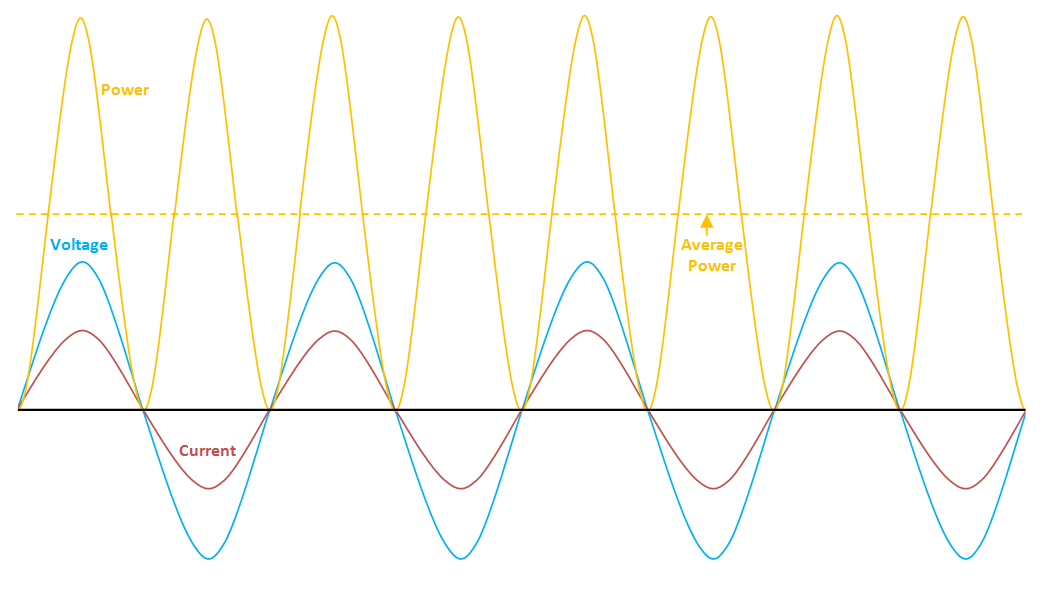 Because of the act of multiplication, the power waveform now has an average value that is non-zero. Taking this a step further, if the load resistor were 1 ohm then, the amplitude of current will equal the amplitude of the applied voltage so, the power becomes the average of \$v^2\$.

So no, average voltage or average current is irrelevant but average power is king.

The devil is in the details when you work out the math.

If you look at average voltage/current and RMS voltage/current, they are different because of the properties of integrals. In other words, $$\int_{a}^{b}i^2 \ dt \neq\Big[\int_{a}^{b}i \ dt\Big]^2 $$ If this property were true, then the squared could be pulled out of the integral and cancel with the square root.

Additionally, there is the issue of the \$\frac{1}{T}\$ underneath the square root which would also cause issues.

In summary, it is because the math does not work out that way.

Average power is just the integral of work, over some finite time period, divided by that time period. For your case, each instant of work is:

So, you integrate that to get total work for some finite period and then, to convert that into an average power value, you just divide it by the finite period. Or:

But if you want to now construct some kind of fictional effective current that fits the \$R\cdot I_{eff}^2\$ model, then by simple inspection of the above equation it must be the case that:

It's just an equivalent substitution, right?

Now, if we apply your formula for \$I_{eff}\$, we will get 1A, as if the AC component produced zero power. I hope you agree that this makes even less sense than the original formula.

Consider \$R=1\Omega\$ and and a current of 1A for one second and 10A for another second. What's the average power?

The point is, the power formula contains the square of the current, so the effective current is higher than just the average of the (absolute value of) the current.

Let me put this in more general terms: Instant power P(t) dissipated over a load is a product (in mathematical sense as multiplication) of V(t) and I(t). Or I(t)*I(t)/R for that matter. Average power is therefore an average[I(t)*I(t)]/R. The paradox is in the well-known mathematical theorem that an average of a product of variable functions is not equal to product of their averages,

To illustrate this basic calculus problem to some extreme, assume that you have a resistor load of 1 Ohm, and the voltage is pulsed as 10V for 10% duty cycle, 10% up, 90% no voltage. The real dissipated power is 10V*10A = 100W for 10% of the duty cycle, and zero for the rest of duty cycle. So the average power dissipated by this resistor is 10W.

Now, if you take (or even measure!) the averages separately using separate meters, the average [V] of this pulsed waveform will come up as 1V, and the average of I will come as 1A. Multiplying the measured results one might come to a conclusion that the power consumed by this "device" is only 1W, which will be totally wrong by a factor of 10!!!.

This is a typical mistake in many disciplines and applications. For example this mistake is in the basis of many bogus claims of some magical water heaters that produce more output than the "consumed electricity" usually explained by "cold fusion", or some other BS. There are even patents granted on these "pulsed heaters".

Not the answer you're looking for? Browse other questions tagged power-supply power circuit-analysis or ask your own question.

0
Rms value and average value for a periodic wave

1
Average Power Formulas
4
Power factor correction in a simple phasor circuit
1
Offset of Output voltage of an op amp circuit with capacitor
2
Calculating instantaneous and average power
1
Confusion between average and rms calculation for power
0
RC circuit with current source
1
Calculating the reactive and active power
1
Why is total harmonic distortion defined in the following manner?
1
Power and Energy Computations in the Frequency Domain
6
Why is the efficiency of a half wave rectifier equal to 40.6% and not 50%?