Ask Question
Asked 7 years, 11 months ago
Active 7 years, 11 months ago
Viewed 2k times
-2
\$\begingroup\$
It's difficult to tell what is being asked here. This question is ambiguous, vague, incomplete, overly broad, or rhetorical and cannot be reasonably answered in its current form. For help clarifying this question so that it can be reopened, visit the help center.
Closed 7 years ago.

Could you tell me about the "exceedingly complicated" process. I'd like to know this in detail.

You cannot really send the data without modification (0V - 0, some positive voltage - 1) over long lines noise can disrupt it and also, if the data contains a lot of "0" or "1" in sequence, the receiving device can lose count (was it 1000 zeros or 1001?), so line codes are used. 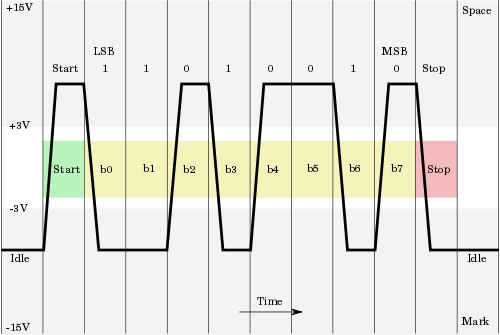 Now the receiver will not lose count of the ones and zeros, but this code has two problems. 1) It uses twice the bandwidth (has double the frequency) of the bit rate and 2) if there is a long string of "0" or "1", the signal will have a DC component, which may be undesirable.

It does not require high frequencies (the frequency is about 0.25x bit rate), but is not self-clocking - a long string of zeros will result in the receiver "losing count".

If you want to know more, go to Wikipedia to read about line coding.

Also, a transmitter may add error correction codes to the bitstream, so that the receiver can detect and correct transmission errors, NICs (at least Ethernet) usually do not do that, because he cable is usually reliable and if there are errors, they are passed up the stack so the higher level protocols can deal with them.

Not the answer you're looking for? Browse other questions tagged ethernet network-interface or ask your own question.

7
hacking an AUI network port
1
How to setup Arduino on secure wifi network?
2
individual ethernet cable wire uses
2
How to build a ethernet HUB?
1
How to setup a development network for the ENC28J60 on XP?
2
Lightweight Arduino network comms
1
Is USB a switched network?
1
Multichannel AoE Hardware
0
How is the capacity of link more for single network link