LED's for a project won't work in parallel

I am currently working on a model kit and am wiring up all the LED lighting in parallel and have run into a problem. When using blue or white LED's they work fine in parallel and then when I add a red,green, or yellow LED only the red,yellow, or green will light up even though they appear to be the correct polarity.

I don't believe this to be an issue with current as multiple white and blue can be in parallel while it only takes one red to turn the others off. 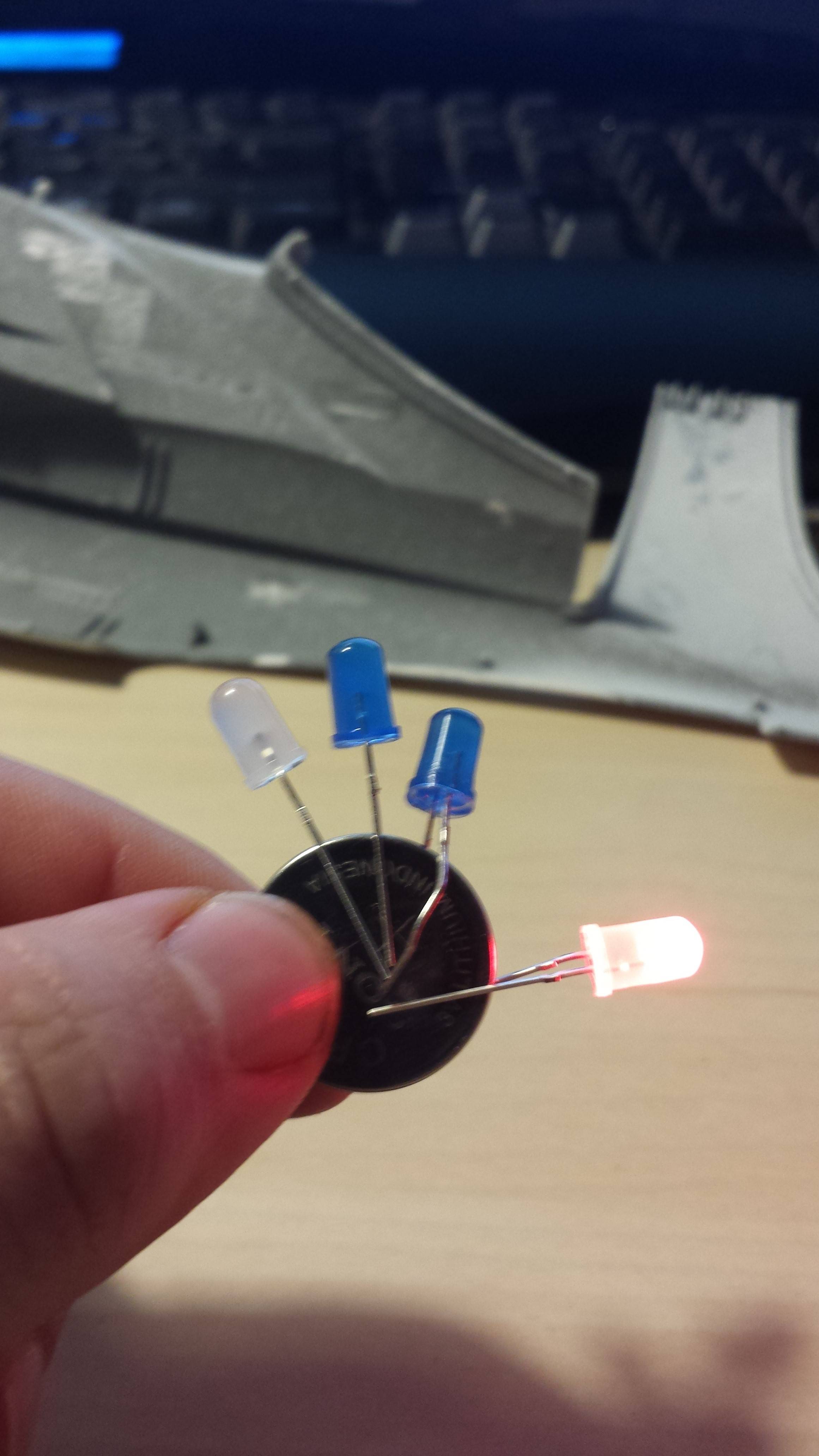 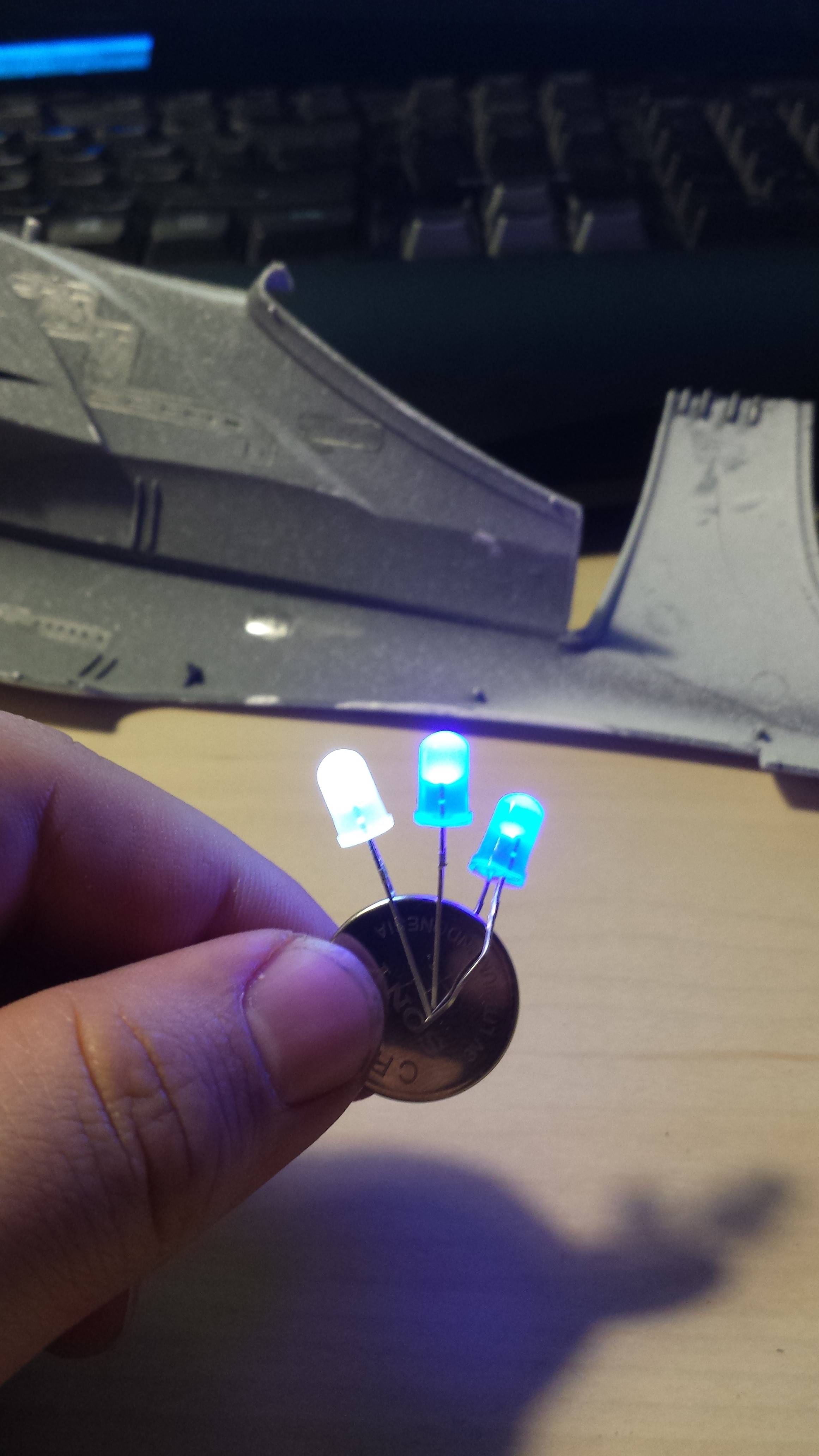 You need at least one "current limiting resistor" per LED, and you need to size them appropriately for each LED's forward voltage.

Each LED has a particular "forward voltage". For red, typically 1.8V, while blue/green can be as high as 3.2V. What is happening, is when you add the red LED, it becomes the path of least resistance, due to the (much) lower forward voltage, and all current goes through the red LED.

I can get into the math if you'd like (it's not too bad), but there are calculators online too: http://led.linear1.org/1led.wiz

These LED+resistor pairs can then be connected in parallel, and your lights will work.

edit: I just read that your power source is a little coin cell battery, these tend to have very high internal resistance, which is why the red LED is not burning out, but rather absorbing all the current. It is acting as though there is a high-value resistor in series with your parallel LED's. When you put diodes in parallel like that (LED stands for light emitting diode), only the one with the lowest forward voltage will conduct, so the red wins here.

LEDs have different forward voltage drops depending on the chemistry/silicon solution used. 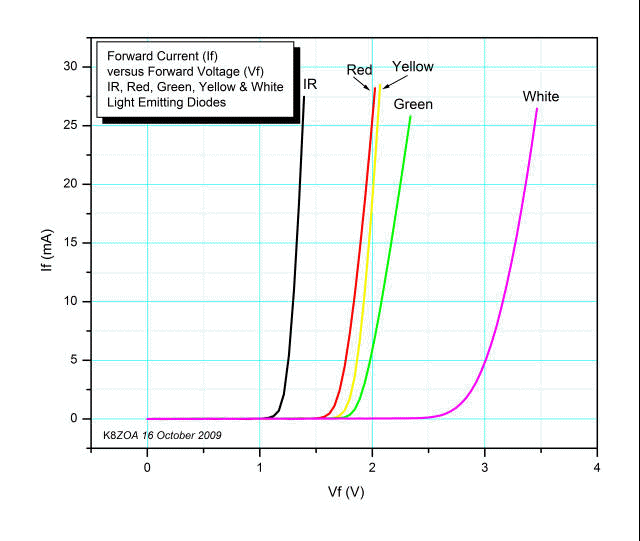 White LEDs use Blue/Ultraviolet LEDS so are about the same Vf.

From the above you could see that you could parallel Blue/White and Red/Yellow/Orange, but otherwise the lowest Vf LED will take all the current.

The forward voltage for white and blue LEDs is much higher than for the other colors. It is NOT recommended to connect LEDs (of ANY color) in parallel as even LEDs of the same color have slightly different forward voltages.

Ref: https://en.wikipedia.org/wiki/LED_circuit (you could have looked this up yourself)

Not the answer you're looking for? Browse other questions tagged led wiring or ask your own question.