Well I finally decided to get familiar with PICs and got myself a PIC18F4680 and a clone of PICkit 2. I made a simple hello world circuit as shown here: 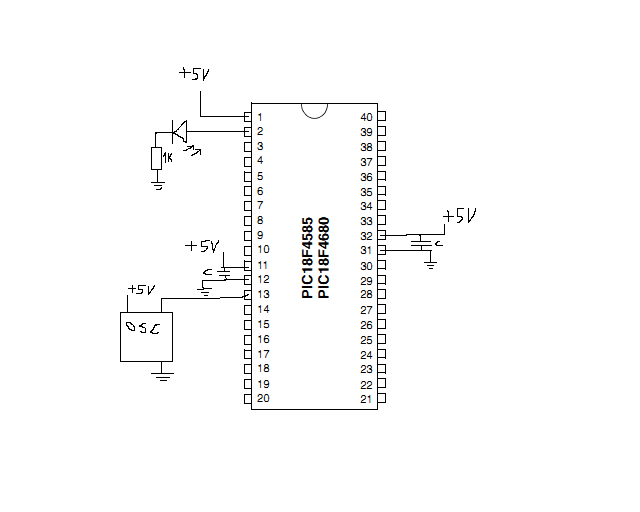 So basically I have an LED from port A pin 0, a crystal oscillator, one of those all in one units in a can (am I using it correctly?), two 100 nF capacitors and the MCLR pin pulled high (and connected to the programmer when I'm using it).

The problem is that when I connect the programmed PIC to power, it won't do anything as far as I can see. Instead I need to connect the PICkit to it, open the Microchip's PICkit 2 application and after it verifies the chip, LED starts blinking as it's supposed to with correct frequency. When I disconnect the PICkit from the circuit or the computer, the flashing LED stops.

What frequency is your external oscillator? I don't know if the PIC can take 40MHz in. Normally we use a 10MHz oscillator and use the PIC's internal PLL to increase it to 40MHz. But check that your configuration settings are HS for the oscillator.

Also, check that the external oscillator is actually producing an output. Often these devices have 4 pins, where one is an enable input. You have have to connect the enable input to +5v to make it work.

Not the answer you're looking for? Browse other questions tagged pic programmer or ask your own question.