I have purchased this Relay Board http://www.sainsmart.com/sainsmart-8-ch-ssr-5a-dc-dc-5v-220v-solid-state-relay.html

This board uses a mager GJ-5FA-L relay with input ranging from 3-32VDC and a coil switching range of 5-220VDC at 5A.

I have done some research and have found relay power ratings - AC vs DC stating:

...relays are allowed to switch only a fraction of the AC power if DC. It's not uncommon to see 250V AC relays only rated for 30V DC....

This would seem to reason that since this relay can handle a maximum load of 220VDC that it would easily handle 120VAC. But what concerns me is a comment on the product page on amazon https://www.amazon.com/SainSmart-DC-DC-5V-220V-Solid-State/dp/B00TEUEW0G stating:

Note that the load is only switched in one direction. If you reverse the + and - on the load connection, current will flow even with no voltage applied to the input circuit.

I know that AC is alternating current and flows in both directions, does this mean that if this relay is applied a 120VAC current that it will fail?

My application is using raspberryPi GPIO pins to switch on and off Christmas Lights that are string 120VAC.

The SSR you refer to does not appear to have an English-language datasheet. I answered a question about this part earlier in 2016.

It is stated to be a DC output SSR but no specification is given as to the type of solid-state switch used internally. I might make a guess that it's probably an IGBT based on the voltage rating and relatively high voltage drop when 'on'. IGBTs are typically co-packaged with an internal antiparallel diode to conduct reverse current, but it's not an inherent part of the structure as it would be with a MOSFET.

The link you referenced refers to mechanical relay contacts and has no relevance whatsoever to solid-state relays.

The question is further complicated by the fact that LED Christmas light strings may or may not use unidirectional current.

If you try to use it to switch 120VAC, a given LED light string may or may not switch fully on or fully off. Or it might work perfectly when plugged in one way, and not the reverse.

If you plug something other than an LED string into that switched outlet there is a fair chance whatever it is will be destroyed before the SSR gets a chance to turn on since many 120VAC devices will be damaged if fed half-wave DC.

I suggest you get the proper AC-output SSR for your application.

The references you found clearly show that the Mager GJ5FA-L is for use with DC and NOT for AC, so this is NOT suitable for your application.
The fact that it's called a Solid State Relay does NOT imply usage for AC or DC. Even though you can't find a datasheet, if the data pointed to is correct then the output pins show connection for +ve and -ve. 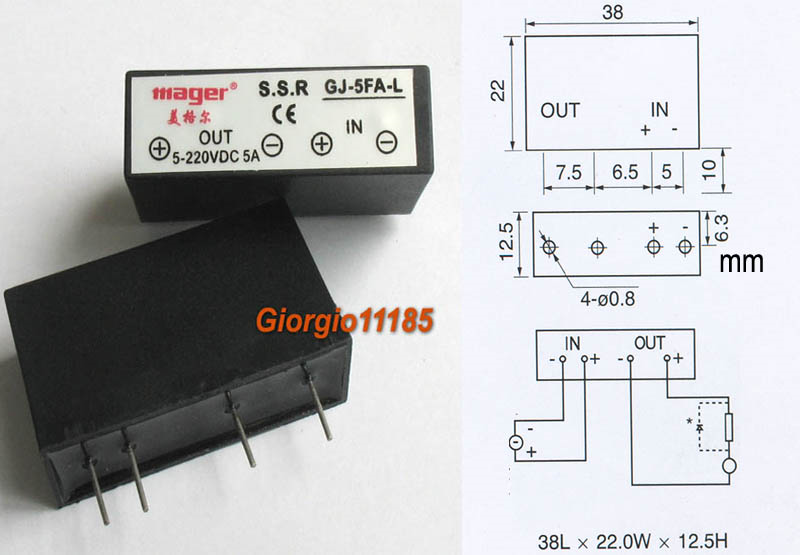 If the output circuit is a high voltage FET then it would have an intrinsic diode which would explain the comment that it conducts all the time if the polarity is revered.