What would be the consequence of an inrush current bigger than acceptable limits at the output of a AC/DC power supply? We are currently using a MeanWell model (GST160A15) whose datasheet reports a maximum inrush current of 120A. We are using the power supply to power a control card. We just figured out that the inrush current flowing into the control card is in excess of 175A with a following negative pulse of ca 200A. The whole is happening into the Mhz frequency range. The measurements where taken with a Tektronix 100 Mhz oscilloscope and a shunt resistor - because the current measuring instrument we have just arrives in the range of 500 KHz. We noticed that 1-2 power supplies out of 15 got broken in a time span of 6 months. Could the failures be entirely due to the inrush current over specs? Or are they other possible reasons? Please look at the attached measurement. 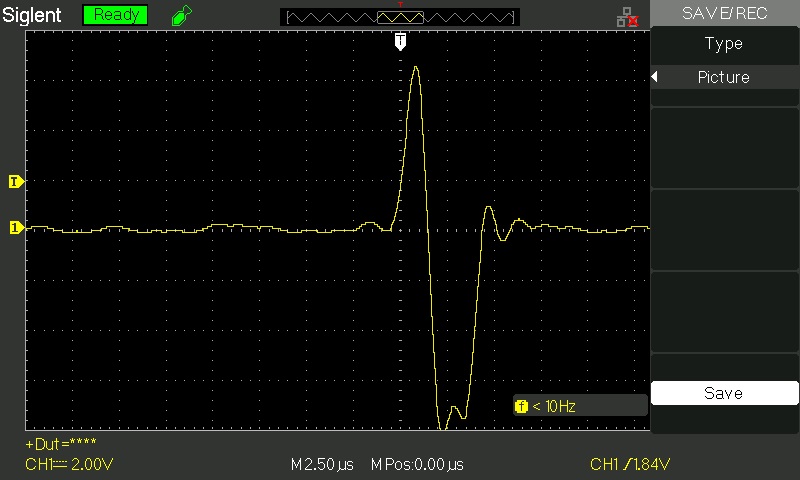 The inrush current of the GST160A15 applies to its inputs i.e. how big the surge of current it might take when it is initially powered. This isn't an output spec for anything connected to it's outputs; it's an input specification.

The inrush into the control card may well be what you said but that does not relate to what the Meanwell power supply takes from its power source.

Could the failures be entirely due to the inrush current over specs?

No but you need to read the data sheet carefully about what current may damage the Meanwell supply due to an excessive load on the output however, I suspect that it protects itself.

Or are they other possible reasons?

Yes, possibly other reasons that may not be at all related to the observations posted in your question.

Usually one of the prime failures in 'Brick' type power supplies is the input capacitors (it is these which cause the inrush current you see specified by Meanwell). These might help you: IBM on general power supply failures and Corsair on capacitors (both low and high voltage) in particular.

Having seen testing done on thousands of 'Brick' and PC type power supplies, high inrush current is solely due to turn on where the primary side capacitors are fully discharged and the AC input voltage is at it's peak. This is the only time you can see inrush current in the hundreds of amps range. In mass production unit tests the solution to these high inrush current is to use an SSR (zero crossing) to turn them on. This ensures that the line voltage is close to zero when you turn them on. We used to do this in racks of tens to hundreds of PC's under cold boot tests otherwise we could pop the main breaker.

The best power supplies will have PTC inrush limiting, but this can only do so much and is a failure component itself.
This problem is largely eliminated by PFC power supplies where the input capacitor size is markedly reduced.

Load inrush (on the output of the power supply) is usually less of a problem since the power supply should shutdown or chirp till the load side capacitors are charged, though this may be an operational problem for you. TI have a good paper on this. The load inrush current is reflected through the DC-DC convertor, but is normally much much less than the input inrush current.

Not the answer you're looking for? Browse other questions tagged power-supply ac-dc failure inrush-current or ask your own question.