What could probably go wrong in PCB if output PAM4 signal my look like this? 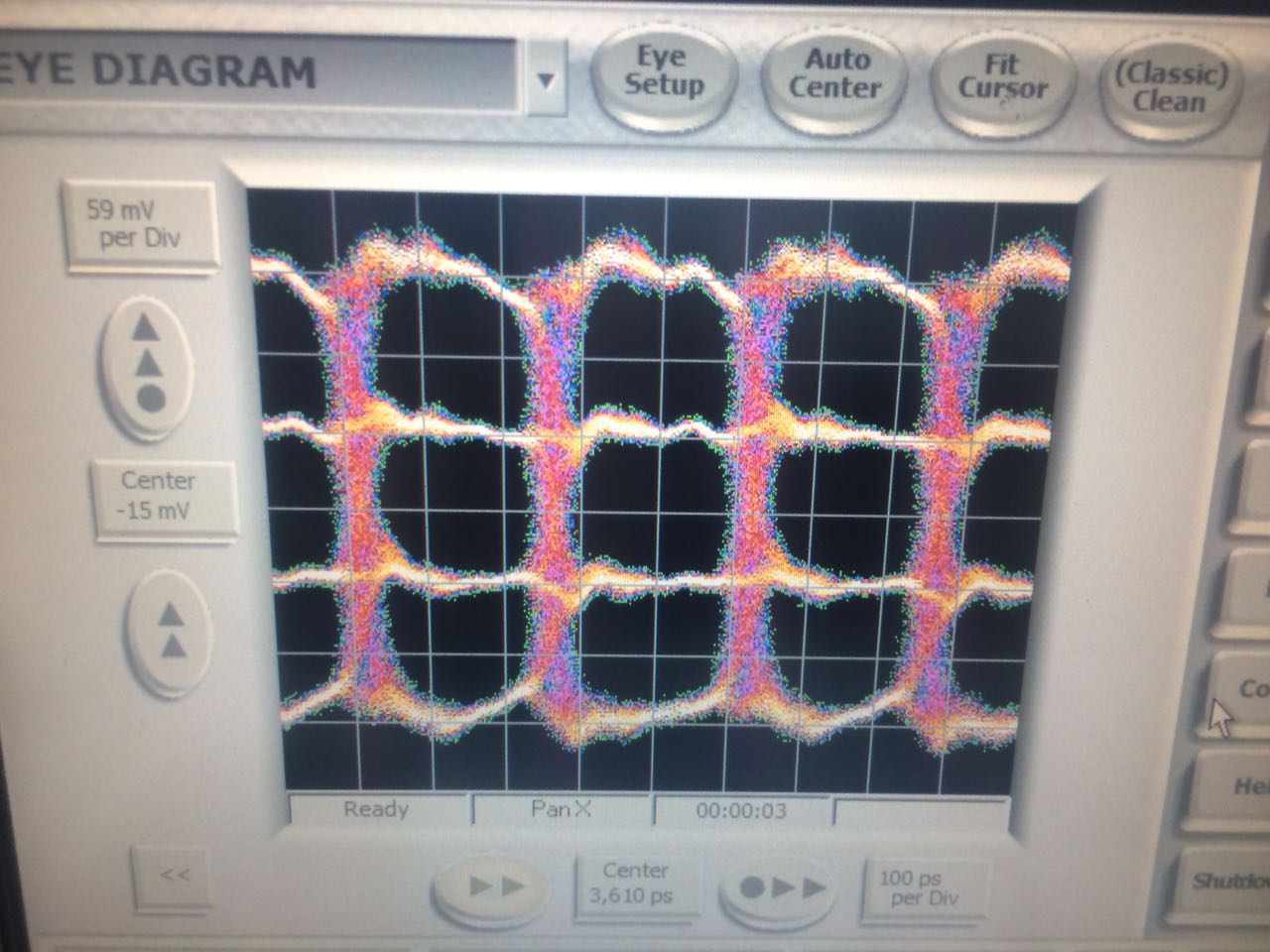 I've been recently testing a self-designed PAM4 transmitter(TX).The transmitter is intended to work at a data rate of 40Gbps,and it really does work in the simulation tool(Cadence)under various PVT,so that I've gained much confindence.

However,I am totally a novice in the field of PCB design,(not to say the high-speed one)and I basically designed this circuit board with some guidelines over the Internet(lol,I promise I read a lot).

Now with some basic measurements conducted,the result is far from good enough:the eye diagram is almost closed at 28Gbps,so I slowed the TX a little bit,to the speed that I am fully confident about(@4Gbps).As can be seen in the pic,it still turns out to be working in a bad state:edges are not clear at all,levels are rough.

So if the IC itself is assumed to work as satifactorily as in the simulation tool(sharp edges and flat levels),what could possibly go wrong from a pcb perspective to cause problems in the pic?

SMA_CLK_BP&SMA_CLKB_BP are the ports which high-frequency clocks (provided by BERT) come in.SMA_TXP&SMA_TXN are the output ports for the PAM4 signals shown in the picture.

There are some bypass capacitors(SMT) and ferrite beads around,mostly on the bottom layer,to serve the supply.

For simplicity sake，some pull-up/down resistors have been omitted in the schematic.

The SMA connector grounding looks like a problem to me. There are traces going to vias, which I assume connect to a ground plane. Instead, I think there should be something like 20 vias in each pad going to the ground plane. The via-in-pad process adds cost to the PC board, but I think in this case it is required. If you add some inductance to the connector ground pin in a simulation model, you may see the problem.

Lots of jitter on the edges there, what is your clock source and is there an on chip PLL in play?

The top and bottom of the eye do not look horrible to me, some signs of impedance discontinuities but I would guess that a lot of that is the transitions to SMA cables, it is the edge timing that seems very poor to me.

Can you get a jitter histogram out of that instrument, and maybe also a phase noise plot?

Judging from the balanced nature of the jitter, I think its from your IC, or your clocking setup, and NOT THE PCB.

One challenge with jitter is the need to perform system analysis, and not just assume FAST edges will be adequate. [Is your input clock of high amplitude with fast edges?]

If the internal nodes of a gate or amplifier are slow, and the output edges are fast (you burned more power to achieve that fast output), you'll have more jitter than if you burned power all the way along the signal chain.

Your jitter looks balanced, left to right about the vertical edges. That means its random, and not deterministic. Have you operated some gates or amplifiers or clocked-latch at low power, then used FAST output drivers?

Not the answer you're looking for? Browse other questions tagged pcb-design signal-integrity high-speed or ask your own question.

13
Why does reflection off a PCB via look like this?
7
DDR bus design review
0
How do I determine if the clock signal suffers from high speed effects
2
Signal and power integrity - 4 layer board
1
How can I evaluate a bond wire's effect on high-speed signal integrity
3
How can I use the TDR result to evaluate the effect of impedance discontinuity?
0
4-20 mA PID controller PCB Layout
0
Resistors in high-speed I/O trace when impendance mismatching