Why would you short two pins of a potentiometer?

I've found a potentiometer which controls the heat of a cook top. One of the outer pins and the centre pin were shorted with a soldered jumper. Why would someone do that? What does this achieve?

Tying the wiper and one end pole together effectively turns the potentiometer into a simple variable resistor (or "rheostat").

It no longer functions as a voltage divider would, but it does mean that in the case of a failure of the wiper contact (intermittent contact with the carbon track), you'll still have a known maximum resistance value, instead of becoming an open circuit. 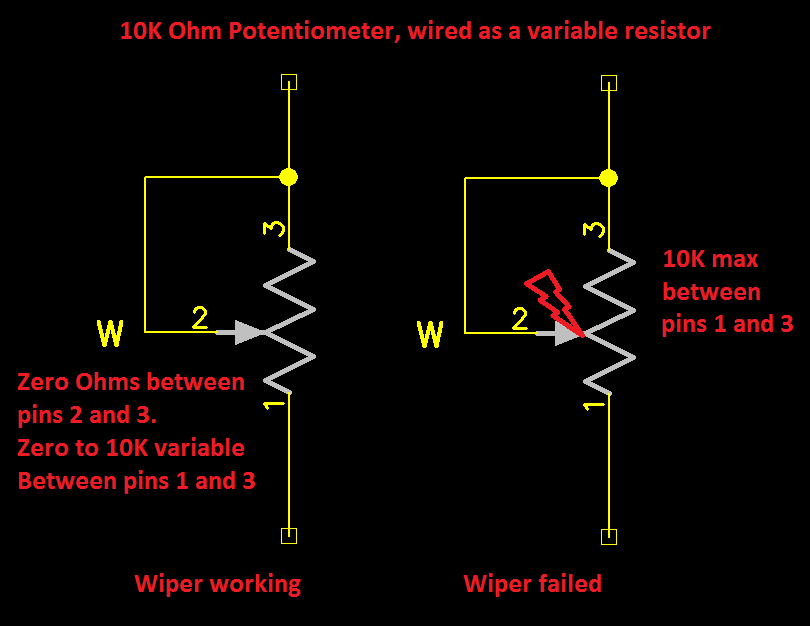 Depending on how your cooker works this might be a crude failsafe to reduce the heat in case of a failure of the wiper. I would still expect other failsafes to be in place too of course.

It is not unusual for a 2 pole variable resistor of equivalent ratings to be more expensive than a potentiometer, so to save cost sometimes a designer will choose to use a pot and simply tie the wiper to one end.

EDIT: Thanks to @winny for reminding me that "rheostat" is another name for a variable resistor.

Beyond what Wossname said, it also protects against arcing. When you move the wiper, it will occasionally stick / jump / etc (especially as it ages). Not enough to be really noticeable, but still present. If your load is at all inductive, you'll end up with voltage spikes, which can lead to arcing and damage the potentiometer. (Even if it's not inductive, depending on voltage this may happen...)

By clamping the resistance to be at most <whatever the value of the pot is>, generally you'll limit the maximum voltage to a low enough level that arcs won't develop.

(There's also a fun little feedback effect here. If the wiper jumps & arcs, it'll damage the wiper and pot surface slightly, which makes it more likely to arc the next time.)

Generally speaking, if you are using a potentiometer as a rheostat, you probably should be tying the unused pin to the wiper. It's not going to hurt, and it may help.

Not the answer you're looking for? Browse other questions tagged resistance potentiometer short-circuit rheostat or ask your own question.