I'm wondering what the real advantages of op-amps with differential outputs are (e.g., AD8138), compared to just taking a signal V+ and feeding it to a unity-gain inverting amplifier to obtain a complementary signal V-. 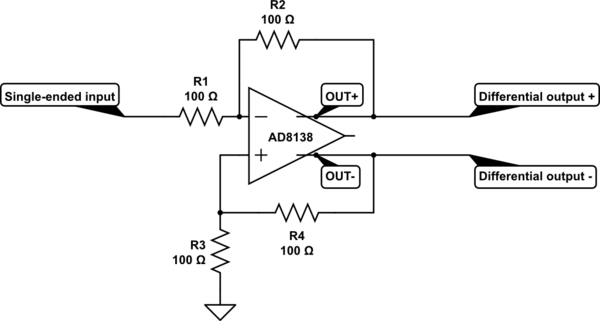 I have control over the single-ended input (it is the output of the previous stage of my circuit), and it's just that I want to convert it to differential to transmit it to an A/D converter that is on a separate board (and that offers the option of differential inputs).

In case it matters: my signals will be band-limited at 1 or maybe 2MHz.

Fully differential op amps (FDAs) make it easy to level-shift the common mode with an internal common-mode error amplifier that is controlled by a pin on the IC: 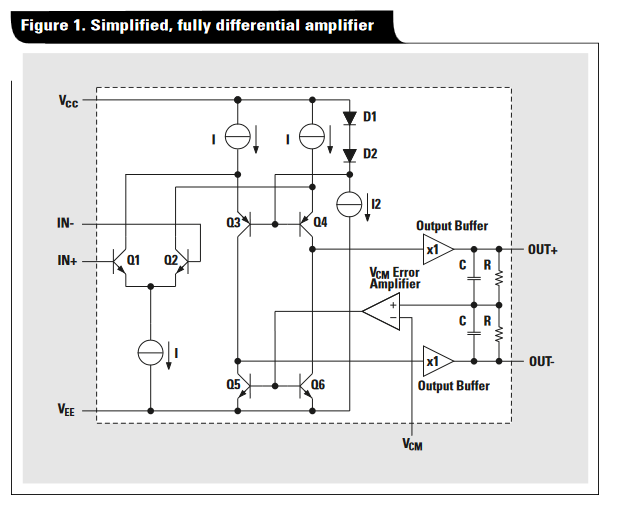 The AD8138 datasheet mentions this as well:

The AD8138 behaves much like a standard voltage feedback op amp and makes it easy to perform single-ended-to-differential conversion, common-mode level-shifting, and amplification of differential signals.

DC common-mode level-shifting has also been difficult with previous differential drivers. Level-shifting has required the use of a third amplifier and feedback loop to control the output common-mode level. Sometimes the third amplifier has also been used to attempt to correct an inherently unbalanced circuit. Excellent performance over a wide frequency range has proven difficult with this approach.

Another app note mentions the difference in common-mode control between a fully differential op amp and two single-ended op amps:

FDAs have been compared to two standard inverting single-ended-output operational amplifiers (op amps), configured in differential architecture and tied together using a common-mode output loop. While this is valid as a concept, there are important differences. For this discussion, an important difference to remember is that when using a standard single-ended-output op amp in inverting configuration, the input common mode is controlled; but when using an FDA, the output common mode is controlled.

Previous differential drivers, both discrete and integrated designs, have been based on using two independent amplifiers and two independent feedback loops, one to control each of the outputs. When these circuits are driven from a single-ended source, the resulting outputs are typically not well balanced. Achieving a balanced output has typically required exceptional matching of the amplifiers and feedback networks.

The AD8138 architecture results in outputs that are very highly balanced over a wide frequency range without requiring tightly matched external components. The common-mode feedback loop forces the signal component of the output common-mode voltage to be zeroed. The result is nearly perfectly balanced differential outputs of identical amplitude and exactly 180° apart in phase.

Dual single-ended op amps and FDAs are both available in 8-pin packages, but FDAs make better use of the available pins because dual single-ended op amps require an extra two op amp input pins. FDAs use one of these pins for the output common mode control (typically called VOCM). The AD8138 doesn't use the other free pin, but other FDAs do. Usually this extra pin is a power down control. For example, the THS4551 has the following pinout: 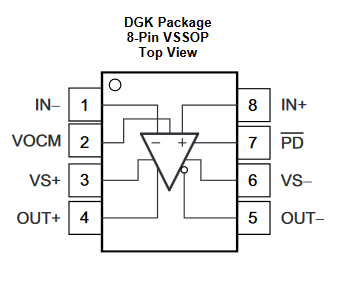 The PD\ pin is the power down pin on this device.

The somewhat comparable dual single-ended op amp THS4222 has the following pinout with the same package: 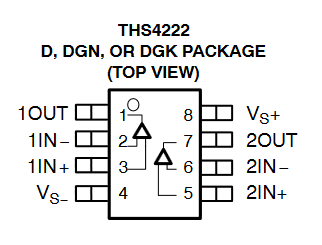