Why do (microphone) preamp designs tend to limit opamp gain to max 60 dB?

Looking at many pro recording quality microphone preamps, I noticed that every design I looked at that uses an opamp (discrete or IC) limits the gain provided by the opamp to about max 60dB. While most preamps use another stage (transformer(s) or another opamp) to get to 70db or even 80dB, I wonder why they don't just use the first opamp to get there. From what I understand, there would be some advantages:

Does it have something to do with opamp stability over 60dB?

I also noticed that complete mic preamp ICs made by THAT-Corp also have a maximum gain of 60dB.

Gain/Bandwidth product, you want maybe 50KHz bandwidth at 60dB (1,000 times), so you need somewhere around 50MHz, gain/bandwidth product (And more would lower HF distortion)... Make it 80dB and now you need 500MHz GBP, which is getting difficult if you want low noise down near DC (And is getting really bad news to stabilise at low gain).

Also consider that the noise is completely dominated by the noise for the stage having the first 20 or 30dB of gain (Do the maths), there is a lot to be said for splitting things so that the first maybe 30dB of gain happens in a low noise stage designed for low Z sources and low 1/F noise, which now only needs a few MHz of GBP and will be easy to stabilise even with weird source impedance. Then do the rest in a second stage (where noise matters less and you have a known source impedance).

The other difficult thing is that control laws that make sense become increasingly tricky if going for a one knob gain control, a classic instrumentation stage with have a gain setting resistor varying from a few ohms to maybe a few k ohms, which if you think about it is only maybe 3 orders of magnitude, very difficult to make a reverse log pot have more range then that.

There is the matter of GBW(gain-bandwidth product), so a single stage is improbable with good performance. It's not enough to just squeak through in bandwidth you also want enough gain to reduce the distortion and get accurate reproduction with flat response (though arguably distortion at more than about 10kHz is unimportant for human hearing). Of course you can always have a couple of stages with more reasonable gain each. Remember bandwidth is defined by the -3dB point (the output will be down to half power at the edge of the pass band), and that's not exactly flat by audiophile standards.

Another issue is that even a very good op-amp may have an input-referred noise level of a couple \$\text{nV}/\sqrt {\text {Hz}}\$, whereas a transformer input stage will provide an essentially noiseless step-up in voltage (at the expense of lowering the input impedance by the square of the turns ratio).

Since very low voltage sources such as ribbon microphones tend to be low impedance as well, this is a good trade-off.

There are other methods of getting extremely low noise performance by using discretes such as multiple JFETs run at rather high drain current. This can reduce the noise, ideally by the square root of the number of JFETs, but the input capacitance is proportional to the number of JFETs in parallel, so again the bad effect increases faster than the improvement.

A good overall picture of the whole range of what microphones and other audio devices produce: - 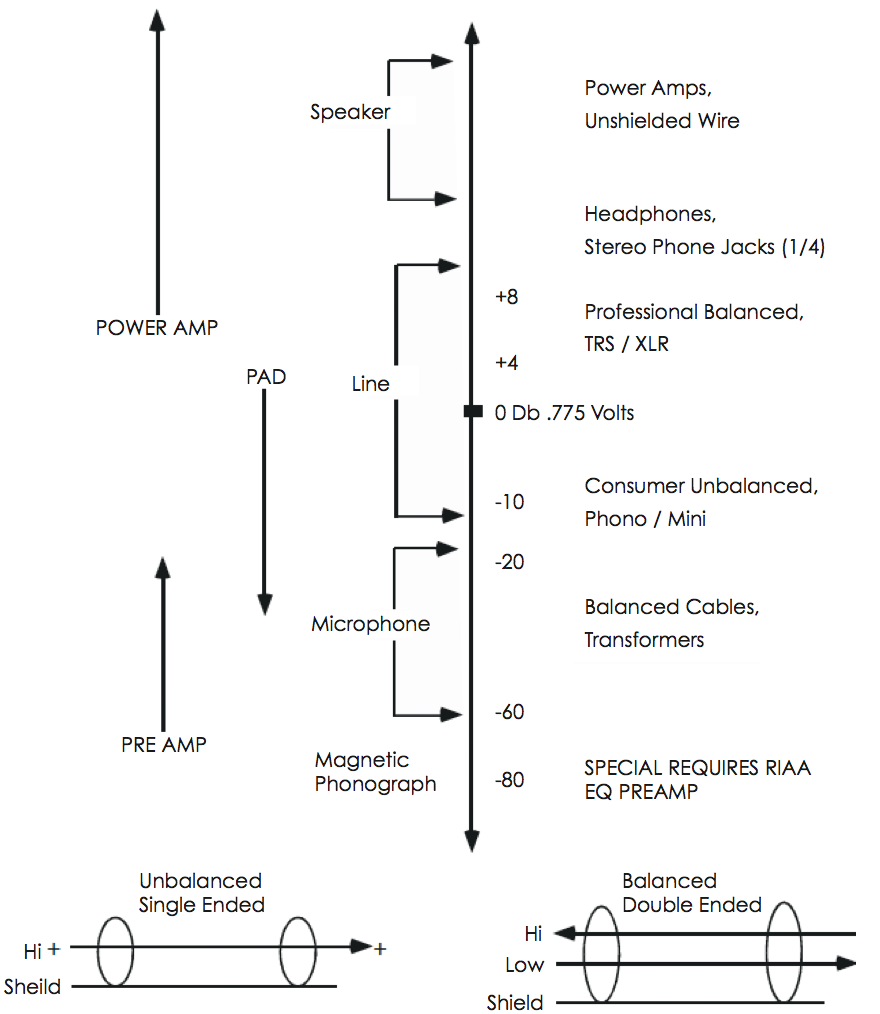 Line input levels are typically about 0 dBm hence a typical microphone preamp will produce have a gain range of 20 dB to 60 dB.

Many op amp circuits are designed so that they would yield a known finite gain if constructed using ideal components including an infinite-gain op amp. In practice, such circuits will always be constructed with non-ideal components, and their behavior will not quite match what would have resulted from ideal components. Consider a very basic amplifier: 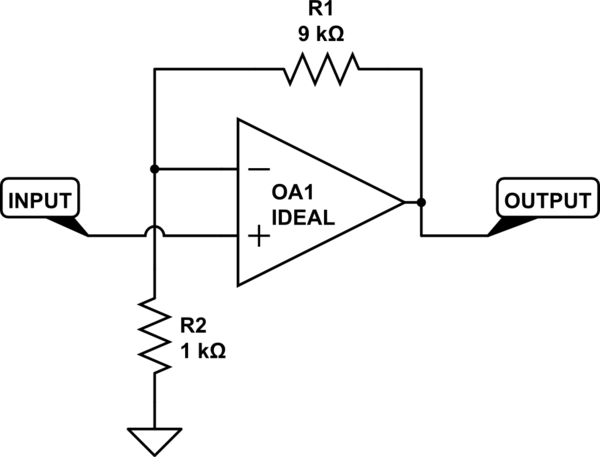 When using ideal components, the gain will be (R1+R2)/R2; I'll call that the "nominal gain". In an actual circuit, if an op amp has a constant open-loop gain, the gain will be 1/(R2/(R1+R2) + 1/opAmpGain). If the open-loop gain of the op amp is much larger than (R1+R2)/R2, then 1/opAmpGain is going to be very small relative to R2/(R1+R2), and its exact value won't matter much. Further, even if the open-loop gain might vary due to factors like frequency or--even worse--the input voltage, the maximum and minimum gain for the circuit would be relatively close. For example, if the open-loop gain might vary between 500x and 1000000X, the net gain of the circuit would range from about 9.8x to 10x. More variation than might be ideal for some uses, but still pretty small.

If R1 were changed to 99K (changing the nominal gain from 10x to 100x), then the circuit's sensitivity to the actual gain of the op amp would be increased more than tenfold. The same variation in the op amp's actual gain would cause the circuit's net gain to range from about 83x to 100x--a much larger variation. If one were to instead cascade the circuit shown below (for 10x gain) with a second copy, the resulting circuit would have a gain that could range from about 96x to 100x. A larger degree of relative uncertainty than when using one copy of that circuit, but much smaller than when trying to achieve 100x gain in one stage.

A gain of 60dB would entail a 1000:1 voltage gain. While one op amp with a high enough open-loop gain to make a 1000:1 nominal gain practical at audio frequencies might be cheaper than two op amps with slightly-inferior specifications, op amps that will work well at such higher gains are apt to be much more expensive. At some level of gain, using two cheaper amps will be more practical than using one amp which is of sufficient quality to work well at the higher gain.

60 dB means 1 mV from the mic becomes 1 V out. That's about the maximum you want to amplify a microphone and feed into a "line level" input. Most microphones produce a few mV out for normal sound levels.

In addition to the other excellent answers about gain-bandwidth product, there is another problem. With too much gain, the input op amp can saturate due to the input offset voltage. Many mixer boards use the 5532 op amp for the first gain stage. It has a typical offset voltage of 0.5mV, but it can be as high as 5mV over temperature. With 60dB of gain, a 5mV input offset becomes 5V of DC offset at the output. The 5532 also has 10MHz typical gain-bandwidth product, so at 60dB gain the bandwidth is at most 10kHz.

When there is a lot of gain, there also tends to be a lot of noise. After a preamp, I like to use a low-pass active filter to get more gain, and also filter out some of the high-frequency preamp output noise. I use the OPA2134 op amp, which I learned about through the good active filter design advice at Linkwitz Lab. Unless the maximum frequency is low, I would use less than even 60dB of gain in a single stage. Two 40dB stages would be better.

Not the answer you're looking for? Browse other questions tagged operational-amplifier audio gain or ask your own question.