How could I go about determining the component values of the described filter? I know what they are, but not how to get them using proper formulas

For this specific purpose, I need A1 to be 3 and A2 to be 1/3, i.e. A2 = 1/A1. I have values that I obtained somewhat coincidentally that achieve this behavior, which are shown in the circuit below. My question, finally arises from my lack of understanding of how to actually approach this circuit. It's almost like a band-pass filter, but not quite as one of the ends will amplify the voltage by the same amount it would have been attenuated. That's pretty much where my confusion lies. In this schematic, the circuit is designed to work towards the gains previously described, and is built to handle frequencies ranging from 20 Hz to 20 kHz.

R3 is always a 20k potentiometer. However, as far as the other components go, they can vary so long as they fall in accordance with those relationships. My issue lies in that I'm not quite sure what to do next to get the answers I came up with. I think I maybe have to compare how the expression for gain changes at each extreme with the expression for a gain of -1, but I'm not sure. If anyone can walk me through this, as well as correct any incorrect assumptions I've made, it would be a great help.

I did not realize this circuit would be so complicated to analyse : ) when I started to look at it using the FACTs. First off, I redrawn the circuit in which the inputs were no longer floating but ground-referenced. I also considered the open-loop gain \$A_{OL}\$ to later push it to infinity. The newly-redrawn circuit is below. I have split the potentiometer in two distinct resistances linked by a ratio \$k\$ and reflected in the ground-referenced source driving the op amp: 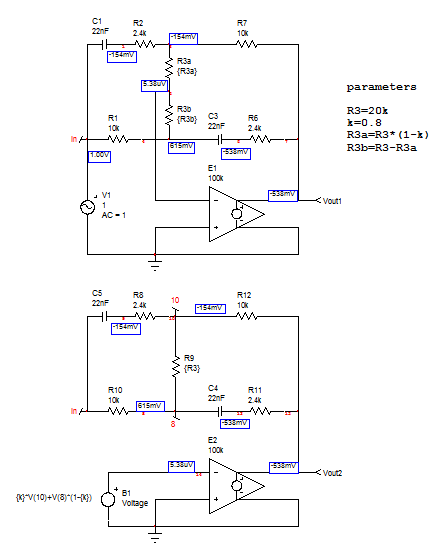 Both dc and ac responses are similar. The next step is to find the dc transfer function for \$s=0\$: open the capacitors and determine the gain in this configuration: 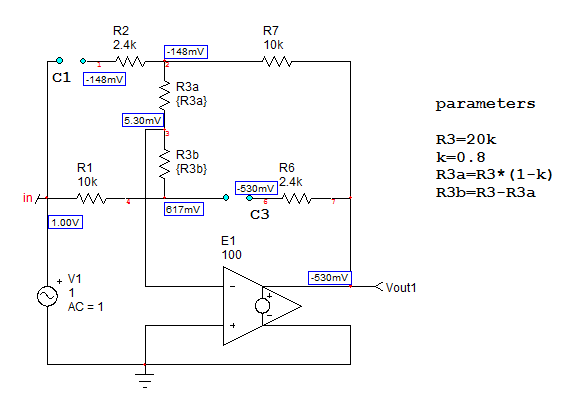 The numerator can be determined using several approaches: inspect the transformed circuit and see if any impedance combination could lead to a null in \$V_{out}\$ despite the presence of \$V_{in}\$. You could for example check the condition for which \$\epsilon=0\$ and solve the equation. The other option is to apply an Null Double Injection (NDI) and determine the new time constants (as we did for \$D(s)\$) but with \$V_{in}\$ back in place and while \$V_{out}=0\$. These two paths give the simplest expression for \$N(s)\$. I have adopted the generalized form in which I will calculate three gains \$H\$ when the capacitors are alternatively replaced by a short circuit (for \$a_1\$) or when both are shorted (\$a_2\$). This gives a slightly more complex expression than the two other approaches and you will need to rework the final result to simplify it. For a dynamic response analysis like in here, the generalized formula is okay:

You can also rearrange this expression in a second-order polynomial form as we did for the denominator. Then assemble the transfer function as \$H(s)=H_0\frac{N(s)}{D(s)}\$. The expressions are given in the below Mathcad files:

I have tweaked these equations so that they depend on \$k\$ as a variable to pass and obtained the following responses: 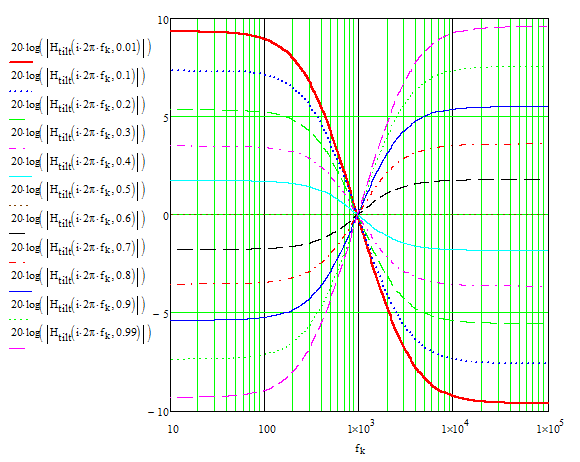 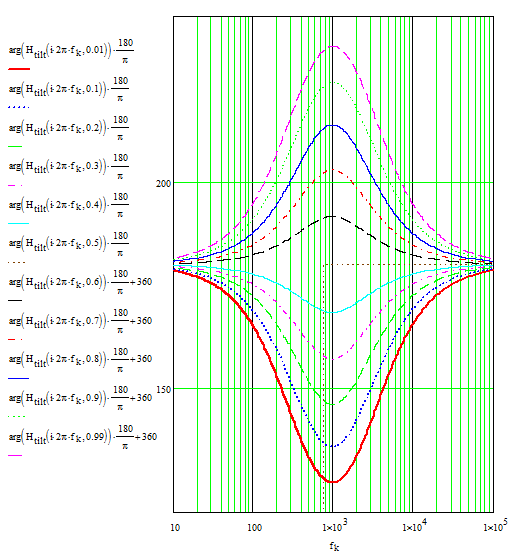 The cool thing with the FACTs is that you do not need to really bother about the circuitry itself: determine the time constants in certain conditions (\$V_{in}=0\$ for \$D\$ and (\$V_{out}=0\$ for \$N\$) and assemble them as recommended to obtain the final expression. If you are interested by the technique, you can check a seminar taught at APEC in 2016. It is an introduction to show the power of the FACTs and to apply them to simple passive and active circuits.

I recall this is a variation of the Baxendall Bass/Treble amplifer but combined.

It would be like controlling both Bass and Treble band gains in opposite directions simultaneously !! by +/- range = 15dB total

My preference was my old Bogan Stereo Tube filter switch called CONTOUR that unlike LOUDNESS which is useless to me, you run your system Flat at normal levels ( or equalized to sound flat) Then when the phone rings, select CONTOUR and a broad midrange is cut -15dB to ease communication but still sound great.

If you want a tuneable midrange filter instead with 15 dB cut, make C1/C2=10

Not the answer you're looking for? Browse other questions tagged operational-amplifier filter component-values or ask your own question.

2
How does this circuit attenuate high frequencies?
7
Why does this first-order RC filter with an op-amp display resonance?
1
How are the gain and corner frequencies calculated for this speech bandpass filter?
0
Frequency selective operational amplifier circuit
4
Op Amp: Gain Bandwidth Product and LP Filter
5
Purpose of capacitors and extra resistors in the feedback of the inverting op amp?
1
Compensating for power loss through resistor in high/low pass filter circuit?
2
State Variable Filter - Unexpected High Frequency Behavior
2
Sallen Key Cut-off Frequency
2
Do lead and lag filters have the behavior of high and low pass filters even if the zero and pole used are complex?