Understanding voltage and current of a phototransistor w/ collector resistor

I want to study the circuit of an Infrared proximity sensor, so I assembled a circuit with an infrared LED (940nm) and a phototransistor. 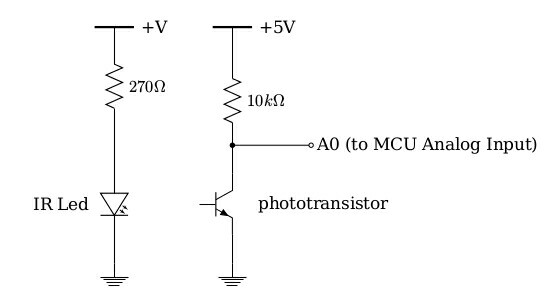 I expected (and desired) when the IR Led is On, the value of A0 to be near zero, thus the phototransistor to be fully open and almost the whole current to pass from it.

Do I miss something there? Should I change something to the circuit or the components, in order to get an almost clear 0V or 5V?

Read the datasheet. It should tell you what the expected phototransistor current will be. That is apparently not enough to cause 5 V across a 10 kΩ resistor.

There are several things you can do about this:

In that case, I'd probably flip the phototransistor and resistor so that the signal starts at 0 V with no light and goes up with more light. A gain of 8 would just about do it.

If the value at low light levels is important, then make sure to use a opamp that can handle signals down to ground on both the input and output. Or, use a small negative supply from a charge pump or something so that 0 V is well within the opamps linear region.

The voltage across the phototransistor cannot go to zero, even if hit with a many-watts IR laser.

If replacing the 10K with a 330K doesn't fix the problem, then use a voltmeter to check the actual voltage across the phototransistor. How low does it go when the IR LED shines upon it? Also try blasting it with an old-style non-LED flashlight, also a 100watt incandescent bulb, or some outdoor sunshine. And, power up two or three of your IR LEDs, and aim them all at the phototransistor.

Add a vis-red LED in series with the 10K resistor. That way you can "see" any changes in the phototransistor current.

Once you figure out the original problem, next try connecting an IR LED in series with the phototransistor, then aim them at each other. It becomes a flip-flop which detects IR light. A brief pulse of ambient IR light will turn on the circuit, and then it keeps itself turned on via the IR LED. Then to turn it off again, you have to momentarily turn off your LED (or stick cardboard between the two.) Also add a vis-red LED in series, so you can see this happening without an Arduino or a voltmeter.

You may be misunderstanding the way in which the circuit is working. The Arduino's analog input pin should have a high impedance, and so should have little effect on the action of the circuit.

So, to a close approximation, all the current in the circuit runs from the +ve supply, through the 10k resistor, through the phototransistor, to ground.

The thing that is varying is the current that the transistor is allowing through. The more photons hit the transistor, the more electrons it lets through.

Realistically, the voltage across the transistor will never be zero - because it's a transistor not a switch. And the current it lets through will be limited by the amount of light you can shove into it.

Not the answer you're looking for? Browse other questions tagged infrared phototransistor or ask your own question.