What are the indicators of insufficient decoupling

(This question occurred to me as a result of a different question here.)

I am usually fastidious about using decoupling capacitors near all power pins on ICs, large and small, analog or digital. I also use power and ground planes in PCB designs when possible. Generally, I try to use "good practice" in order to obtain reliable robust design. And, as far as I can tell, I've been successful.

The question is, what are the indicators of inadequate decoupling. Suppose I decided to not include the bypass caps at the power pins of a microcontroller or CAN transceiver, or something else.

There are some obvious indicators like the microcontroller spontaneously resetting, but there must be more subtle problems that I might not even see, or might not attribute to inadequate decoupling.

The symptoms are that most of the time everything will be fine, except sometimes it might not be. This can be data-dependent and very hard to reproduce.

Think about what's happening. Some chip suddenly increased its current demand. That caused its immediate power voltage to dip to some level where correct operation is no longer guaranteed. Even if not, the rapid change of the power voltage can cause trouble.

It is very hard to predict what exactly that trouble might be and at what threshold of voltage or derivative of voltage it occurs at. A data line may be temporarily interpreted in the wrong state. A flip-flop may get flipped. You don't know. Whatever happens is also a function of temperature, even uneven heating of the die. Try reproducing that exactly from one test to the next.

So the bottom line is things can get flaky. Maybe. Sometimes.

The problems you get will vary a lot depending on the circuit used and the ICs used. I think your best bet is not to look for a specify problematic behavior of the circuit but to just check directly your voltage Vcc-GND on your scope as close as possible to the pin of your ICs.

During operation, you should see a flat line (pure DC voltage). If you get ripples, this is a clue that your decoupling is insufficient. You have to watch the voltage for all states your circuit can have and for an extended period of time. Ripples may appears periodically during a digital transmission only for exemple. Also, you must repeat this measurement for all ICs on your PCB even if they are on the same power bus.

The frequency of the ripple is very important as it will tells you what kind of capacitor you need to attenuate this specific ripple. For exemple, a low frequency ripple (below 1 kHz) will be filtered easily with an Aluminium Capacitor while a high frequency ripple (100 kHz or 1 Mhz) will be more easily filtered by a film capacitor or ceramic capacitor.

The amplitude of the ripple will gives you an idea of how much Farad your decoupling capacitor must be.

I think this method is the best to be sure your circuit doesn't suffer from poor decoupling instead of looking for strange/inconsistent circuit behavior.

I have an easier and shorter answer:

When you have inadequate power you will get all kinds of weird problems that are usually not related to each other and that at first glance seems impossible to explain.

This answer has 4 parts: jitter, power-gate-driver, ADC, and dataeye/PAM settling.

Your jitter specs will not be achievable, and you audio playback will be 'noisy'. Your phasenoise (aka jitter) will not be achievable, and your wireless link may not even synchronize; your bit-error or packet-error rates will be unacceptable; your duplex wireless links (intended to allow concurrent transmit and receive) will desense because transmitter close-in phasenoise will directly enter the portion of spectrum planned for the receiver.

For Power Driver ICs, given long GND and VDD leads, expect rails to initially collapse and then ring upwards, well above the VDD. By 5 or 10 volts, given 3cm of wire in leads of non-surface-mount Cbypass, or in absence of Ground Plane. 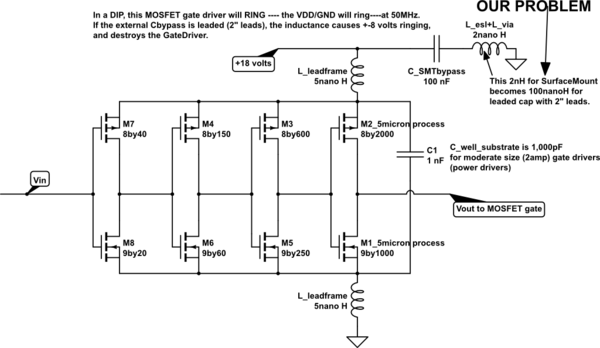 Thus............self-destruction is a result of non-local bypass capacitors.

The resonant circuit is the lead inductances, and the on-chip C_well_substrate which is much smaller than the PCB Cbypass.

[edit] Regarding OpAmps and ADCs: Your measurements will show wide CODE SPREAD. Your opamp Vout will never settle, because their VDD is ringing at high frequencies and directly appearing on the OpAmp's Vout, to be digitized by ADC.

Your DataEye will be jittery, noisy, with non-flat tops, thus unremitting Inter Symbol Interference because the VDD is never quiet, has never settled, and that VDD ripple blasts right through the OpAmps to your signal because the OpAmps have 0dB PSRR at high (capacitor-lead ringing) frequencies.

If you already know what DVT means and perform a rigorous DFM,DFT and DVT on the design specs, then might wanna consider adding susceptibility reliability testing in your Design Validation Test plan. This includes: forcing the supply voltage to +/-10% limits and change crystal frequencies +/- limits to look for functional errors ( a.k.a. Schmoo plot test). - You do the same with hi/lo Temp and high %RH while injecting 1A pulse noise using a loop over the chips, looking for high impedance tracks with high impedance sources that cannot suppress the coupled noise.
- You may sniff board with a probe ground wire shorted to tip and look on a spectrum analyzer or scope with max sensitivity looking for noise and then inject noise back using a similar size loop from a 1 amp DIY pulse generator looking for functional issues.

Just like predicting when glass will shatter, binary systems in an analog world work perfectly until it breaks.

NOISE can be measured precisely and margin to error determined.

Currents induced by large signal loops rather than shunted via nearby Cap to Vss:Vdd planes ( low inductance planes)

We can predict all binary communication results as an analog signal to noise ratio, SNR, with a probability function or a bit error rate. (BER).

Not shown is the 100 ohm ESR of the diodes and input capacitance and many other details.

There are excellent reasons to use a separate power and ground plane as close together as possible to increase the capacitance between then. The inductance of a square is the same for a whole PCB or a tiny chip capacitor. There are good reasons to choose 0.01uF over 0.1uF and visa versa if you get into choice of ceramic, SRF with synchronous clock currents and track layout. You can judge your noise problem by sniffing with a scope loop and measuring signal integrity of the supply without a ground clip using 1cm tip and barrel connections on 10:1 probe > 300MHz.

Learn to test your Noise Margin in every design

The functional symptoms of logic noise errors are anything unexpected, when you least expect it

Not the answer you're looking for? Browse other questions tagged pcb-design decoupling-capacitor or ask your own question.