Are there any high-stability oscilators, which are not crystal based, given that temperature is stable down to 0.01 C and voltage down to 0.001V?

Will LC-based oscillator be able to show performance comparable to crystals in such conditions (probably in wierd variants like LC-opamp-LC-opamp-LC-opamp... so that any energy loss on each stage is recovered and we are getting narrower bandwidth)?

Price is not limited here, to a some degree (so brand new atomic clocks are above the budget, but 100$ for peltier/oven & parts is ok).

From my (naive) point it seems that it should be possible to achieve better short & long-term stability than with crystals...

Superb mechanical construction of the inductor is a major factor. See Czech Tesla report cited below for specific advice.

If you can track down this 1941 [!!!] original and/or the many derivatives based on it using both "valves" and 'solid state" circuits you will probably find circuits with performance about as good as you can get.

A circuit based on Seiler's work was published in QST with , I think, a title like "A synthetic rock" or "The synthetic rock. (Rock == crystal).

One reference noted that the oscillator output was designed to be plugged into a crystal socket and when used at eg 12 MHz to provide the reference fquency for a 2 m,etre band (144-148 Mhz) transmitter, produced a signal which was zero beat stable for hours ata time when compared with a crystal controlled test unit. Zero beat stable means drift is within a few Hz at most as otherwise you hear "rumbling" as the two signals heterodyne.

I don't speak or read Croatian and gargoyle was having a bad day but I believe the circuits below are based on Seiler's ideas. See pages 147-148 here. Translation to English (unless you read Croatian) looks worthwhile. Many other related circuits there too. These may come from US "hams' W8PK & W3EB.

Note that these two circuits do NOT look overly special. I think a significant part of the "trick" is in the relative (lack of) loading of the tuned circuit. 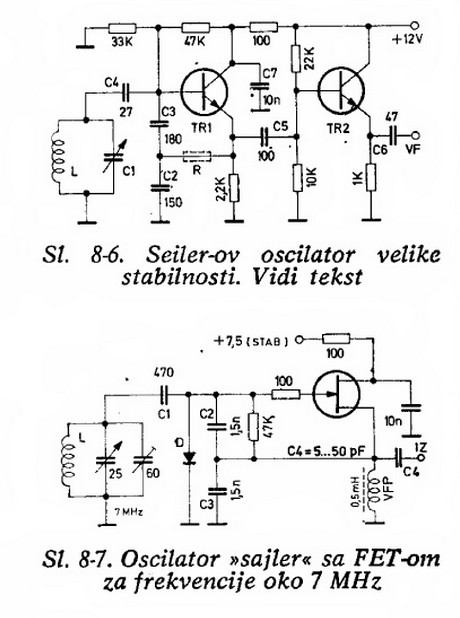 This mentions the Synthetic Rock in passing, with approval.

Resources for Understanding Oscillators {2003} - with references to MUCH older material.

The following are from the above reference -

1949 original of the above report in Czech. Superb][(http://www.scribd.com/doc/62276627/Vackar-wholepaper)
Starts with a description of mechanical requirements for high stability.

The above suggests that the Vackar oscillator is potentially more useful.

For a budget of $100 you could easily put together a GPS based standard. For example A Simplified GPS-Derived Frequency Standard.

This particular project has a measured accuracy and the author states: "I have made observations over several months, and concluded that the 10-10 decade (from 10-10 to 10-9) is a reasonable expectation from this system."

This is a project put together in 2006 and not optimized for stability.

Another option is a cheap oscillator using a phased locked loop (PLL) tied to a received radio signal from WWV or other national authority. Their short term stability isn't that great but their long term stability is probably as good as it gets. This is how the cheap "atomic clocks" that you see in the store for $20-30 (the kind that hang on the wall and display the time) work.

As an aside, you state "so brand new atomic clocks are above the budget". That is true, but you could pickup a used one for about $50-60.

There are MEMs oscillators, resistant to shock in the order of tens of thousands of G's. For example, see http://www.abracon.com/Oscillators/ASEM.pdf

Not the answer you're looking for? Browse other questions tagged oscillator stability or ask your own question.

5
Design for an analogue oscillator that doesn't drift in frequency?
0
What is the maximum frequency range of a Clapp or Vackar oscillators?