In a project of mine I have two ICs that work at different voltages. IC_A at 3V and IC_B at 3.3V and they talk to each other through UART.

In my prototype I use a mosfet with two resistors for each signal in UART( TX, RX ) as a level converter.

Could I omit the mosfet and connect them directly or with only a resistor in series? And if yes how to find the resistor's value? e.g.Ohms law?

You actually don't care what the VCC or VDD voltage level is, but are more interested in the V(input lo) and V(input high) requirements for both devices.

For your 3 V and 3.3 V system elements the real questions are:

For many interface elements the input is advertised as 5 V safe, so for those elements the 3.3 V output can interface directly to the 3 V system.
I'd suggest there are no conditions where this would not work or cause damage.

Some logic has clamp structures in the input gates, so there is more to consider. For these elements it may look a bit like this: 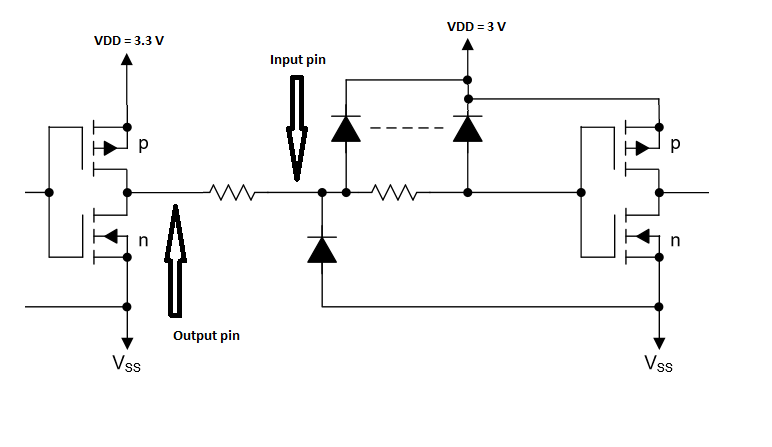 Under these conditions (high signal) where the input diode clamps are planar diodes with a Vf of typically 650 mV you unlikely to get current flowing from the 3.3 V output into the 3 V elements VDD structure/supply.
For safety your could add a small value resistor to limit current.

Since the V(output high) of the 3 V element will approach 3 V, this will easily meet the requirements which are likely in the 1-1.8 V level. You can directly connect the 3 V element output to the 3.3 V element input.

There is an important principle to consider here:

Typically the abs max input voltage limits are Vdd to GND +/- 300mV. When one is off, that means that more than +/-300mV you are violating the absolute maximum spec. If current is not limited, damage can occur, especially when power is re-applied to the one that is off.

There are a few ways to deal with this (in increasing order of cost and performance:

To use a resistor, you have to be satisfied with relatively slow propagation delays. For the 3V->3.3V you can almost certainly just use a series resistor. Most 3V-ish devices are CMOS and most are happy with 0.7Vdd or 2.31V for a 3.3V supply, so you would still have 600-700mV of noise margin, which is plenty.

If speed is not an issue, something like 10K is nice, and limits the input current to a really safe level. To go the other way, you might be able to get away with 10K again, but it would be nicer to divide it down by about 10%, so 10K/100K: 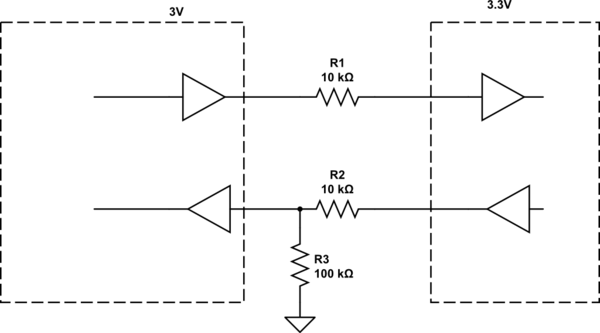 Speed wise, if the capacitive load was quite large (say 100pF) due to cable or whatever, then the time constant would be 1us. Probably not a problem for a UART, at least at 115k baud or less.

Of course the transistors invert the signal and the resistors (and most voltage translators) do not, but you knew that.

There are two different things you need to be thinking about here.

The second is the high voltage device talking to the low voltage device. This is more about the risk of overloading the input than any logic levels (though you may just want to check out the LOW logic level thresholds in the same way as for the HIGH levels in the other direction).

You should first check the absolute maximum ratings for the low voltage device to see if the higher voltage is going to be too high. If it's within the absolute maximum for an input (usually something like Vcc + 0.3V) then you should be OK, though for sustained HIGH values it could be "dodgy".

Most devices have some form of protection on the inputs (though not all, so check first) in the form of diodes between the pin and ground and Vcc. This allows any excess voltage above Vcc (or below ground) to be fed through to the relevant rail instead of entering the IO pin (diode clamping). These only have limited current capacity though, and it's the adding of a resistor to the input that helps in this scenario - limiting the current to avoid damage to these diodes (assuming they exist - you could always add your own as well).

Some data sheets include a "maximum over-voltage current limit" in their ratings. That is basically the current rating of these diodes. You can use that to work out the lowest value of resistor that would still be safe. In general, though, higher is better, but not too high as to adversely affect the shape of your signal. For UART data that's not much of a problem since you are working at relatively low frequencies.

However, for the price of, say, a BSS138P and a couple of 10K resistors, is it really worth taking the risk?

Everything is quite simple. You don't need to do anything, and just connect both circuit directly. The rail difference is actually within normal 10% tolerance of LVCMOS-33 interface.

Both devices are CMOS devices. The CMOS devices have logical (switching) threshold somewhere in the middle of voltage rails. And the switchimg point scales ratiometrically with supply voltage. So one device will have it at 1.5V, the other at 1.65V, plus-minus 300-400mV in worst case ever. The standard for Low-Voltage CMOS-33 standard defines safety margins and calls for 2V level as minimal input HIGH. Therefore, as long as both sides drive their respective signals nearly rail-to-rail (as usual for low-loaded CMOS circuitry) and HIGH is above 2V and LOW is below 0.8V, everything will be just fine.

Not the answer you're looking for? Browse other questions tagged voltage mosfet integrated-circuit converter or ask your own question.