How to function a TV electron gun for experiments [closed]

right to the point, I'm study physics and I want to do some experiments like q/m, oscilloscope, etc and I needed an electron gun. I had an old crt TV and I took out it's electron gun and vacuum tube out.

I guess F1 and F2 are filament but again i don't know it's working current or voltage. I just need it to shoot electrons and make bright dots on the screen to measure. I'm a bit weak on practical electronics so... need real help.

It is NOT CLEAR from your question whether you have an INTACT cathode-ray tube, because you say "I took out it's electron gun and vacuum tube out." If the tube is still intact (and retains original vacuum, etc.) then simply take the picture tube number (how to read) and Google for the circuit diagram which shows the various pins and what signals and voltages it needs. For example... 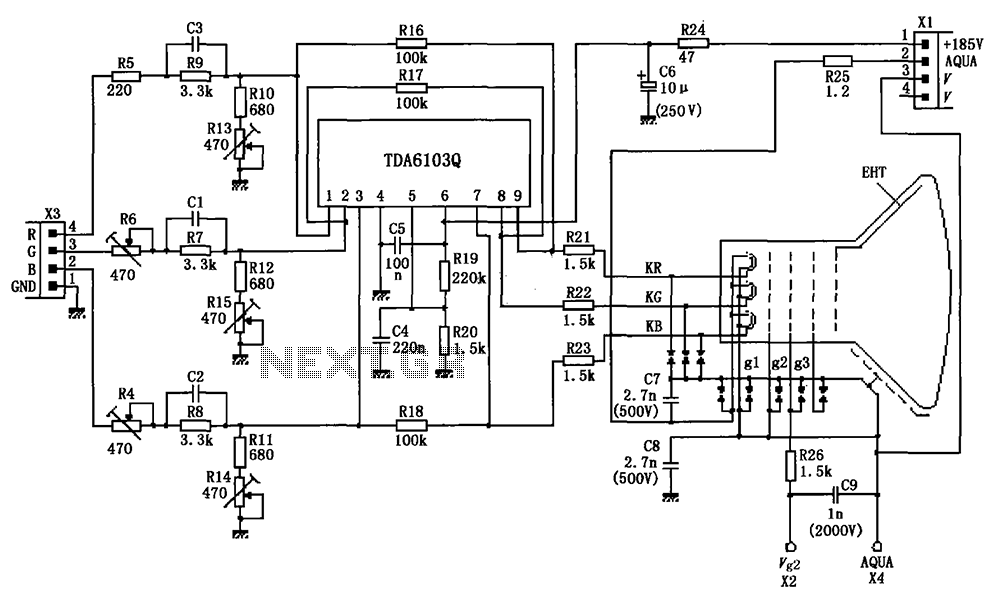 NOTE CAREFULLY: In addition to all the vey legitimat warnings about high voltages, dangerous glass shattering, etc. etc. those tubes (ESPECIALLY THE COLOR VERSION) require EXTENSIVE external circuitry to operate properly, and you seem to have said that you discarded all the required external bits.

It is ESPECiALLY difficult to do this with a COLOR CRT because of the three separate electron guns and special "fiddling" that is done inside. You would be MUCH better off with a MONOCHROME CRT with a single, simple electron gun.

I would recommend finding an old camcorder with a tiny CRT viewfinder. Those will be much easier to experiment with, typically having the accelleration (high voltage) and deflection (magnetic or electrostatic) circuits, yokes, etc still intact.

Don't. This is not a piece of hardware you can safely experiment with.

Driving a CRT requires extremely high voltages -- often up to 30 kV. Working with these voltages is inherently very dangerous. Additionally, driving a CRT improperly may cause it to emit X-ray radiation, which may cause injury to you or to any bystanders.

Since you no longer have any of the parts that were associated with the CRT, you don't even have an easy way to generate those voltages, nor to guess what voltages are even appropriate for your CRT. It's junk now -- throw it away. (Carefully; the glass will break violently if mistreated.)

If you need an oscilloscope, buy one.

I fiddled with CRTs and am still here (with minor scars) so it is possible. However a bare electron gun is pretty much useless except maybe as a cool sculpture component.

In order to work it needs a rather high 2nd anode voltage, of the order of a few kV. Old TVs (monochrome) tended to use about 15kV if memory serves, and more for color TVs (up to about 30kV). Electrons don't just shoot out of the end at high velocity like a 9x19mm round from the barrel of a Glock, they are accelerated by the high voltage toward the screen. Further, if you power up the filament in air it will last only minutes or seconds before oxidizing and failing.

The high voltage is by far the easy part. To get it to work it has to be in quite a good vacuum, which would require something like a two-stage mechanical roughing pump and a diffusion pump (or a very expensive turbomolecular pump that will die if mistreated). High vacuum systems require a certain set of skills that has to be acquired. Once the system is pumped down, a 'getter' (something like a barium material heated by an external induction heater) is used to gobble up some of the remaining gas. That's what the shiny spot was on the neck of the tube. None of this is impossible but it takes a lot of care and commitment and a certain amount of cash even if stuff is scrounged or bought on eBay.

If you really want to fiddle with CRTs try to get ahold of an electrostatic-deflection oscilloscope or radar display tube from mid-last century- maybe 3" or 5" round with green P1 phosphor. You need to take care about the potentially lethal high voltage on the second anode, anode and focus electrodes. Implosion injury if the glass breaks is also possible. Deflection voltages are often pretty modest (the smaller the screen size and the longer the tube, the less voltage it takes to deflect the beam a certain distance), and a dual op-amp can drive them directly in some cases. Pick one that you can get a datasheet for, in a language that you are fluent in (or that has a translation- there are some ex-Soviet tubes out there). Lower anode voltages will reduce the required deflection voltage too, but there are limits (brightness and perhaps optimum focus will suffer). TV set CRTs used electromagnetic deflection which is much more limiting (but it can result in higher deflection angles and thus shorter tubes). 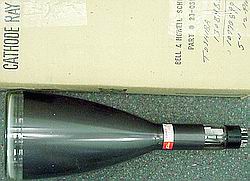 Edit: FYI, the below (from this site) is what an electron gun (triple type for color) looks like: 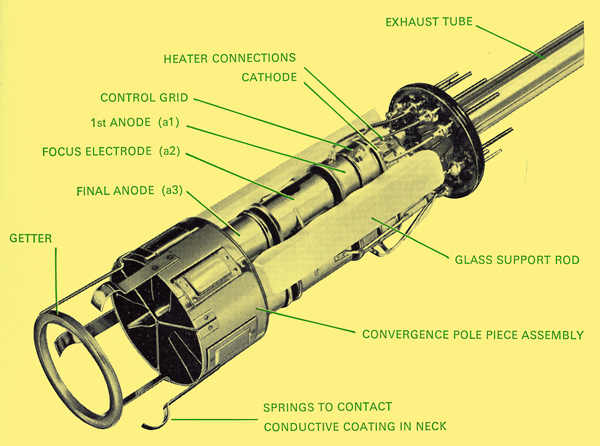 As already pointed out, you're going to need some HV signalling to drive that CRT. If you are not comfortable with low voltage electronics, I wouldn't suggest you diving into HV.

We used to work in HV lab and trust me, mistakes are costly. At best, your eqipment is burnt. At worst, well you could completely injure a part/whole of your body.

If you really need to do this project, work closely with someone who has done a similar project and go step by step. Work from low voltage electronics and see how things go from the beginning.

Here is an example that you can find on the net:

How to drive a CRT

As you can see, the task you asked is not easy to accomplish.

If I were you, I would work with an experienced team mate majoring in electronics/power engineering and take my time. Give your project 6-12 months to finalize and don't push things.

For use as a TV, high voltages are required. But you can still create an electron beam using lower voltages. You must drive the heater filaments (F1 & F2) at its rated voltage & current to get decent beam current, but accelerating voltages need not be kilovolts. For some tubes, filament voltage is in the 20v (rms) ballpark. Can be DC or AC (50 Hz or 60 Hz).
If you have broken the tube to free the electron gun, you have exposed the filament to air. It has oxidized, and also the getter will have oxidized too. These will both require pumping-out when you re-vacuum the gun.
If you intend to use the vacuum tube as is, looking for bright spots on the CRT face, this is a still dangerous, because you'll still have to use fairly high voltages. And the tube itself, unenclosed is a considerable danger because of its large volume of high-vacuum. I've done this demo for students, under very tightly controlled conditions - don't trivialize the dangers involved, and become very familiar will all aspects of its physical & electrical properties.

First of all, don't do this. A CRT can kill you in at least three ways (high-voltage electrocution, implosion, and X-rays).

But to answer your question: F1, F2 are the filament. AQUA is "Aquadag",a graphite coating on the inside of the tube; this is connected to the high voltage. (But I wouldn't expect it connected to one of the pins, so maybe this is the Aquadag on the outside of the tube, which gets grounded.) G1 is the control grid, which controls brightness. SCREEN is the screen (cutoff) grid. R, G, B will be the cathodes for the three colors. I'd expect a focus grid too, unless F1 and F2 are focus grids, but then where's the filament?

You'll just get a spot in the center of the screen unless you use the deflection coils, which you haven't mentioned.

Not the answer you're looking for? Browse other questions tagged physics electron crt or ask your own question.

1
Meaning of applied voltage on electron
3
Electron Flow Confusion
8
TV screen in still photo: Why are there dark, blackish bands?
0
What is the energy in “electron-volts” of an electron that has risen though a potential of 3V?
43
Why do CRTs have 3 electron guns?
0
Effect of electron discrete nature on current density
0
Could black-and-white CRT-based television sets be damaged by holding a magnet to the screen?