If I connect this very small load (3 LEDs) to a mains to USB adapter, it's fine. Full brightness, great.

I can't even measure the current it's so low.

However, if I connect it to my PC it does 3 things:

It flashes a bit from bright to dim, stays dim and windows says it's malfunctioning.

Nothing has shorted out or anything like that, so is there a minimum current I should be drawing from a PC's USB port?

A device on a USB 2.0 port can initially draw 100mA. It then negotiates a power budget and potentially draw up to 500mA.

When you use a USB phone charger, it will simply give you up to 1A.

So the PC is probably giving the port enough power for it to be bright. Then the device fails to negotiate and the PC cuts the power, making it dim. Note that what the PC does and what it is supposed to do may be very different.

There is a lot more information at this question: How to get more than 100mA from a USB port

Depending on whether you have PC based USB or mobile device USB or USB-on-the-Go capable controllers there IS active current limiting built in. In the crudest and oldest systems there was a 500mA fuse. Blow that and you were essentially dead in the water.
Then came the era of PTC resistors, draw too much current and the voltage collapsed. At least these self reset, but as you increased load the voltage would droop.

Today controllers have high side current limiters either in the USB controller or around it as a support chip. Various kinds exist like this. These devices can do multiple duty, they can limit the current accurately at multiple levels, and can be controlled to increase the current or to turn it off completely. Many of the modern USB limiting controllers will supply up to a negotiated 2.5 A, and will even slow charge large capacitive loads in the devices.

With a modern current limited USB port the OS can be told when power is being drawn and even how much (usually in units of 100 mA) so that the OS can catalogue current budgets. For example in Windows you can examine any given USB port and find it's current demand in units.

Now to your problem. Since you can't have 3 LEDs in series (they won't ever light), they must be in parallel.
If the 3 LEDs are in parallel then I wonder what sort of LEDs you have. Since LEDs don't limit their current (unless it's a CC LED) and the forward voltage is like this: 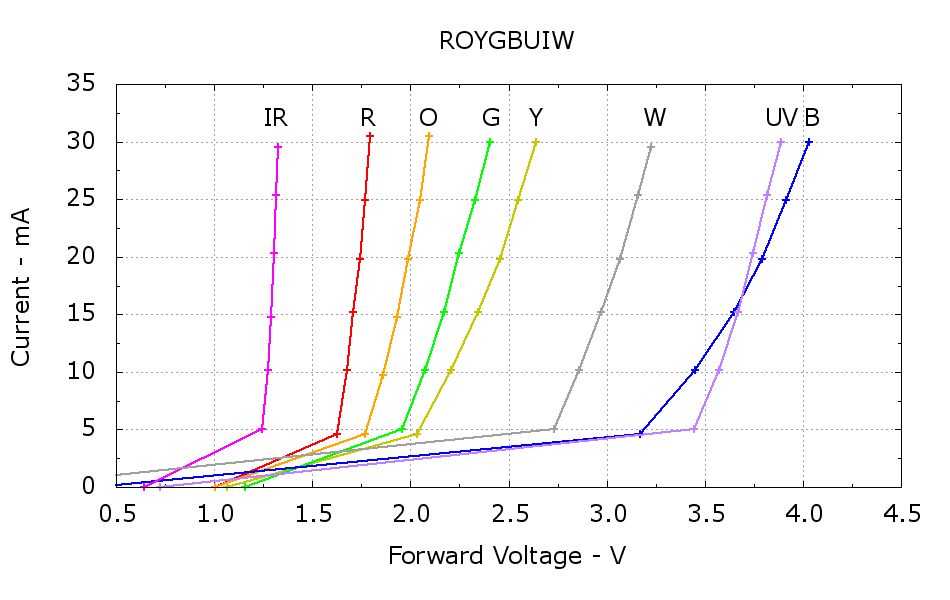 You would need to have a series resister with any LED I know of to limit current. I can only imagine if this is not the case then your mains USB power supply was actually drooping due to the LEDs. You should have seen current values well above 100 mA.

To answer your question more directly you will be able to connect 3 LEDs in parallel to a PC based USB port but you'd need at least 1 series resistor to do this. You also may see the PC report no driver loaded or illegal device base don current flowing and device interaction.

Not the answer you're looking for? Browse other questions tagged current usb or ask your own question.

4
“Wireless” USB cable, via RF / 3G
2
Circuit to maintain a minimum current?
0
How to safely connect the Arduino 5V Pin with a 5V wall wart and USB TTL converter for data transfer?
3
Hardware-level detection of USB3.0 vs USB2.0
0
What power supply do I need for my LED light strips?
0
Totally noob here,help me choosing the best method of powering led
0
Raspberry PI Zero - 5VDC output current?
0
Relays drawing too much current?