A question about Vce of an NPN BJT in saturation region

Below is an NPN transistor symbol and the voltages at its terminals are Vb, Vc and Ve with respect to the ground: 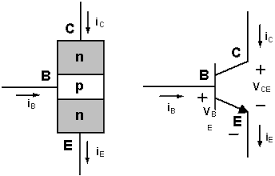 I read that: during the saturation the Vce = (Vc-Ve) settles to around 0.2V and the further increase in base current will not make Vce zero.

But why doesn't Vce become zero?

As far as I know: when the transistor is saturated, the base-collector junction turns on, like a diode, so the collector voltage will follow the base voltage increase, only it will be a diode-drop below. But the same thing happens between the base voltage and the emitter voltage. So at saturation and beyond one can write the following(?):

Let's call the diode drop as Vd between p and n junctions, so the collector and the emitter voltages can be re-written in terms of the base voltage as:

Where am I wrong here?

The simplest case to imagine is an NPN switch. I'll present two different such switch circuits to make the above point concretely clear:

Let's assume a perfect \$\beta=100\$ in both cases shown. We are going to increase the current source's current into the base (of either or both NPNs) from \$0\:\mu\textrm{A}\$ to \$100\:\mu\textrm{A}\$. In both cases, the relationship of \$I_C=\beta\cdot I_B=100\cdot I_B\$ will be considered to hold until some other limitation forces this relationship to change.

Well... nothing more can happen. There's no possible way for a still larger voltage drop across the collector resistor, \$R_2\$. To do so would require \$Q_2\$'s collector to move into a negative voltage value with respect to ground. But there are no sources for that negative voltage available and while \$Q_2\$'s guts might be able to produce voltages in between \$0\:\textrm{V}\$ and \$10\:\textrm{V}\$, \$Q_2\$'s guts can't manufacture voltages outside that range out of thin air. It just doesn't happen.

So the process stops here. More base current achieves nothing. You can apply it, of course. There's nothing to stop \$I_2\$ from continuing right on up to a full \$100\:\mu\textrm{A}\$. So that works just fine. But the collector voltage just cannot continue it's downward direction any more. So the collector current just stops, regardless of the base current. The result is that the effective \$\beta\$ drops from 100 to some lower value, then.

At this point, it should also be clear that the external circuit matters. These two circuits were identical except for the collector load. But the limitation of collector current depends upon the collector resistor value, as well as the BJT. So saturation is best not seen as just an internal detail of the BJT but instead that it also depends upon what is surrounding the BJT.

Another way of saying this is that the transistor enters gradually into saturation as the collector current, coupled with the collector load external to it, causes the collector voltage to move in such a way that the base-collector diode transitions from being reverse-biased into becoming forward-biased. While the BC junction is still reverse-biased, the transistor is in active mode. Once the BC junction transitions into forward-biased, the BJT is in saturated mode. However, saturation is gradual in the sense that \$\beta\$ gradually declines and doesn't suddenly change (it's not a switch-like effect) -- in the above examples where the base current is gradually changed.

For design purposes, if you want a switch behavior then you anticipate the above process and just design around some value of \$\beta\$ that you want to achieve for your switch. If you look it up on a datasheet, there will usually be a curve showing just how small of a difference between the collector and emitter is achievable given some desired \$\beta\$. Or, at least, an example for \$\beta=10\$ which is usually considered to be a highly saturated case for most (but not all) BJTs. Since the external circuit can be designed to force a low \$\beta\$ result, that all works fine. (Of course, you still have to keep in mind dissipation and other limitations for the BJT.)

The very simplistic theory is fine. However, the practice is more complicated, a transistor is not two ideal, isolated diodes.

Amongst the details, we have the residual resistance of the diodes, the way forward bias changes the effective barrier heights in saturation, charge spreading, making the simple NPN scheme work as a useful transistor involves a lot of technology.

Given that the forward voltage of the junction is 0.7v, a VCEsat of 0.2v is 'about zero'. Measure a few different types of transistor at a few currents, you'll see quite a spread from 0.2v depending on the conditions.

Not the answer you're looking for? Browse other questions tagged bjt npn saturation or ask your own question.

0
Bipolar Transistor (BJts)
3
How is possible that with same Ibase there is more than one Vce?
4
Transistor design with beta variation
2
Bjt base current calculation
3
Why does a BJT enter saturation?
3
2N2222 transistor datasheet saturation current
1
Can a transistor have negative Q point?
1
MC34063 with external BJT. Why?
1
Current at the collector
1
What happens when transistor operates in saturation region for constant current source
See more linked questions

3
NPN transistor circuit connection, what determines which region it is at?
1
Common emitter characteristics in the saturation region
1
Confusion in interpreting NPN transistor's saturation region
0
Current gain characteristics versus Collector Emitter voltage. Where is the transistor saturated? Can a transistor be saturated with a VCE of -10V?
0
Negative voltage for Vce - BJT NPN
6
What is the difference between "Collector-Emitter" and "Base-Emitter" Saturation Voltage?
1
BJT: Equation of Vce for Saturation Region
1
How can I prove that Vce saturation lies below .2V?
0
BJT working in saturation mode