So, I'm designing a reverse battery protection circuit using a MOSFET, following this TI application note. I tested it, it works great, Rds(on) is low as expected. However, I'm not really comfortable with it, since the drain-source current is reversed. Here's the circuit: 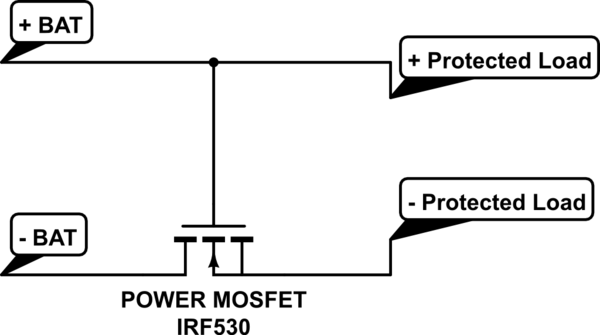 My question: when is it safe to assume that a MOSFET will behave in the same way when passing current in the reverse direction? What can go wrong? Can I be sure power dissipation won't be compromised?

Here are the (simplified) rules by which a N-channel MOSFET obeys:

That is all. Now, here is how it works in your situation: Since you want reverse voltage protection, the MOSFET can't be in the other direction, because the body diode would allow current to flow, powering your device with reverse voltage. So the MOSFET has to be that way. But because we want to avoid the body diode voltage drop, the gate is tied to the +BAT, so the FET conducts when the battery is the right way around. Then, the result is the same as if you had a small resistor (the MOSFET RDSon) in parallel with the body diode, thus reducing the unwanted voltage drop a lot.

There is no reason this should have a bad impact on the MOSFET. Whatever the direction of the current between drain and source, the MOSFET can handle it (provided you're under its absolute rating).

Last thing: you're worrying about power dissipation. The power dissipated by the mosfet is just Vds times the Ids current (ignoring the current through the gate). Or, put in another way, RDSon * Ids² when it conducts. You can estimate it very easily. And, once again, it doesn't depend on the direction of current (a switched on MOSFET doesn't conduct less well in the reverse direction - in fact, it will even conduct a bit better in the reverse direction, because of the body diode in parallel).

This MOSFET sign lacks one particular thing that could really answer your question - a reverse diode. MOSFET doesn't really care if it is reversed in circuit, it's like a switch that has to be opened by sufficient Vgs. When battery is connected correctly, current can flow through reverse diode creating small voltage drop enough to make your Vgs above some threshold voltage. After MOSFET is opened, you can forget about reverse diode's existence. Current flows and only small voltage drop determined by Rds exists across the MOSFET. When battery is connected backwards, Vgs is zero therefore it's impossible for current to flow.

Not the answer you're looking for? Browse other questions tagged mosfet protection reverse-polarity or ask your own question.