How to solve BJT amplifier clipping a signal?

I'm trying to make an audio amplifier for an 8 ohm speaker. I'm new in electronics area and having a problem with it. I already had other issues before arriving where I am, like the need of a high power stage because the low impedance of the load.

The first problem were, if I use an 9V DC source for biasing the transistor, the voltage at transformer primary will float at maximum in 0 to 9V (In an extreme case). So, if the speaker can work at a maximum peak to peak voltage of for example 6V, the ratio n1/n2 should be at the maximum 1.5, because the peak voltage at secondary will be 9/1.5 = 6V. Is that a right reasoning?

Going ahead, if I use a transformer with 1.5:1, the impedance seen in the primary will be 8*(1.5^2) = 18 ohm. So the configuration of this stage of the amplifier would be like this: 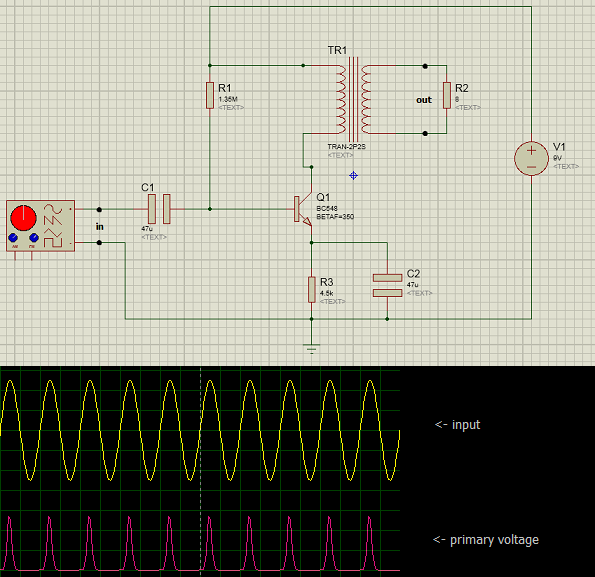 The transistor is biased with 4.5V at emitter resistor, 4.5V at collector-emitter (Vce), and the voltage at the primary is almost 0V for DC. The capacitor at emitter has low impedance and it's almost a short circuit for AC. So, in my mind, the voltages will vary from 0V in the primary and 9V at Vce, to 9V in primary and 0V at Vce (in an extreme case).

But when I run it, these waveforms appears. Yellow curve represents the input voltage (250 mV peak), and purple is the voltage at the primary of the transformer (not the output). It have a positive peak of 130mV, but at the bottom seems not to be what I expected. The curve is being cut out at -20mV. It doesn't should saturate only in a relative high voltage, next to the 9V of CC source?

What is wrong and how can I solve this?

I have changed the bias of the transistor for a collector current of 50mA, with a base resistor of 27k instead of 1.35M. Also removed the emitter capacitor (which really reduced the distortion) and changed the emitter resistor to 10 ohm. The clipping has went away for these low input voltage (250 Vpk), and the voltage at primary is apparently a perfect senoid, with amplitude a little higher than the input voltage. But if I increase the input voltage to 3V peak, the clipping reappears at the bottom. I still can't figure out why this happens.

I'm adding the image of the waves for the last update: 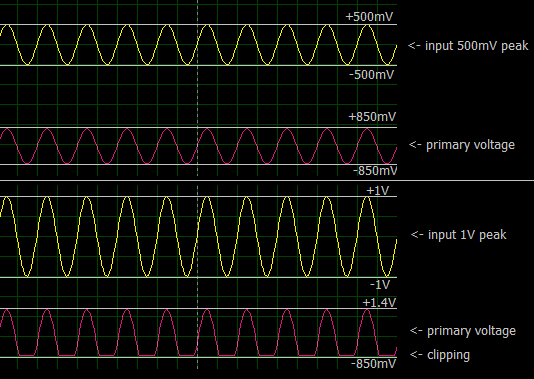 the clipping voltage has increased, but it is still happening. It starts to appear at about 1V peak at the input.

And I don't know if I have made it clear but this is the end stage of my amplifier, with a low gain, only for drive the speaker. I'm making the stages separately for easy understanding of each part. As this stage has a high input impedance I will use a common emitter before for high gain of voltage.

And sorry for my bad english :(

The problem was the transistor must be biased with a collector DC current of at least the same value that the peak to peak current which load requires. Other thing I noticed is that the BC548 I was using fails with a relative big current (>200mA) even in the simulation, the base-emitter voltage increases significantly, also making the wave to clip.

Second answer: getting back to basics

Here is what it takes to drive 8 Ω with 8Vp or 16Vpp in Class A, using negative feedback with Av<10. Note the difference from your values as the impedance ratio is essential to proper Dc bias, gain and avoidance of saturation, clipping and significant distortion. Due to efficiency Class AB is far better and Class E even better. 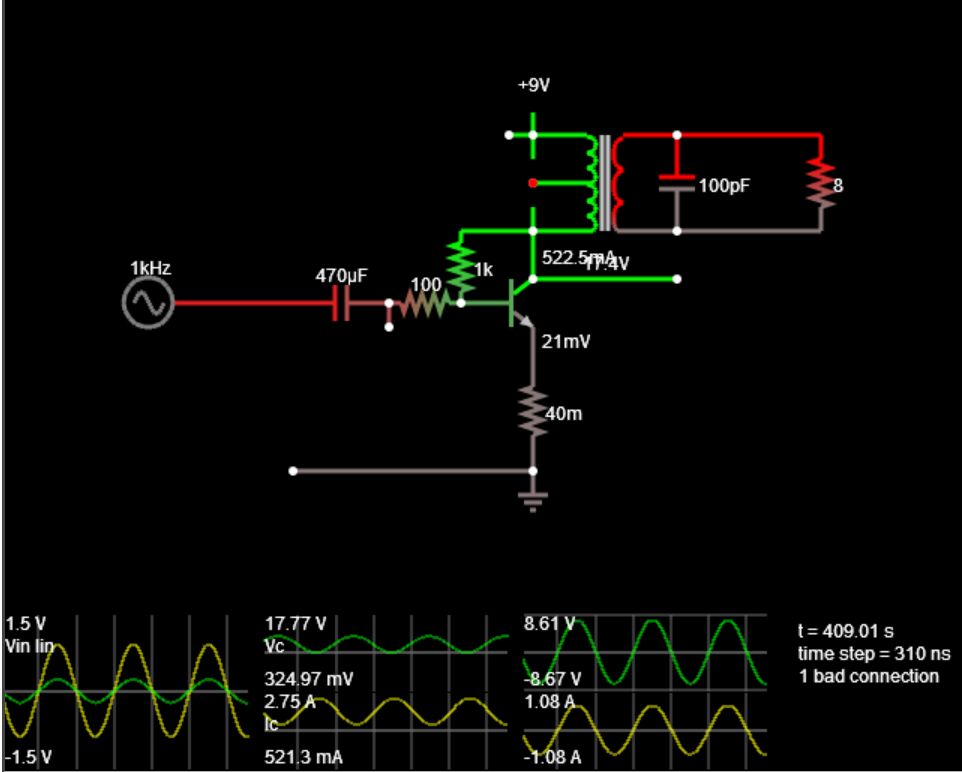 Two major things wrong. First the resistor values in your circuit are way too high to properly have a decent standing DC current from collector through emitter. Yes you need a DC current to permanently bias the transistor into the correct part on the load line and this will need tens if not hundreds of mA.

The 2nd problem is one of understanding - any inductor be it a normal inductor or the primary of a transformer cannot have a sustained DC voltage across it and, as such, it will cause the collector signal voltage (when you get the biasing right as per point 1) to rise and fall equally above and below 9 volts. Potentially, with a perfect transistor (rarer than unaffordium and costlier than unobtainium) you can get 18 volts p-p from a 9 volt DC power source.

Thirdly, as a hint, get rid of the emitter capacitor - you'll never ever be satisfied with distortion figures for this type of class A amplifier with too much capacitance there even when you get the biasing right (hint look at the emitter resistor being more like ten ohms).

@glz simple Common emitters Class A circuits dont work well driving a transformer to 8 ohm speaker due to the DC primary current core saturation. Also single stage transistor amps are good for voltage gain or current gain but not both with high power gain. which you are trying to do.

Use a complementary emitter follower output stage with pre-amp stages for voltage gain of 20~ 50.

you MUST use a centre tap audio transformer in order to reverse the flux in the core and not saturate it with DC even though it is biased with DC. The DC current must be enough to overcome the load AC current to prevent starving the complmentary driver . 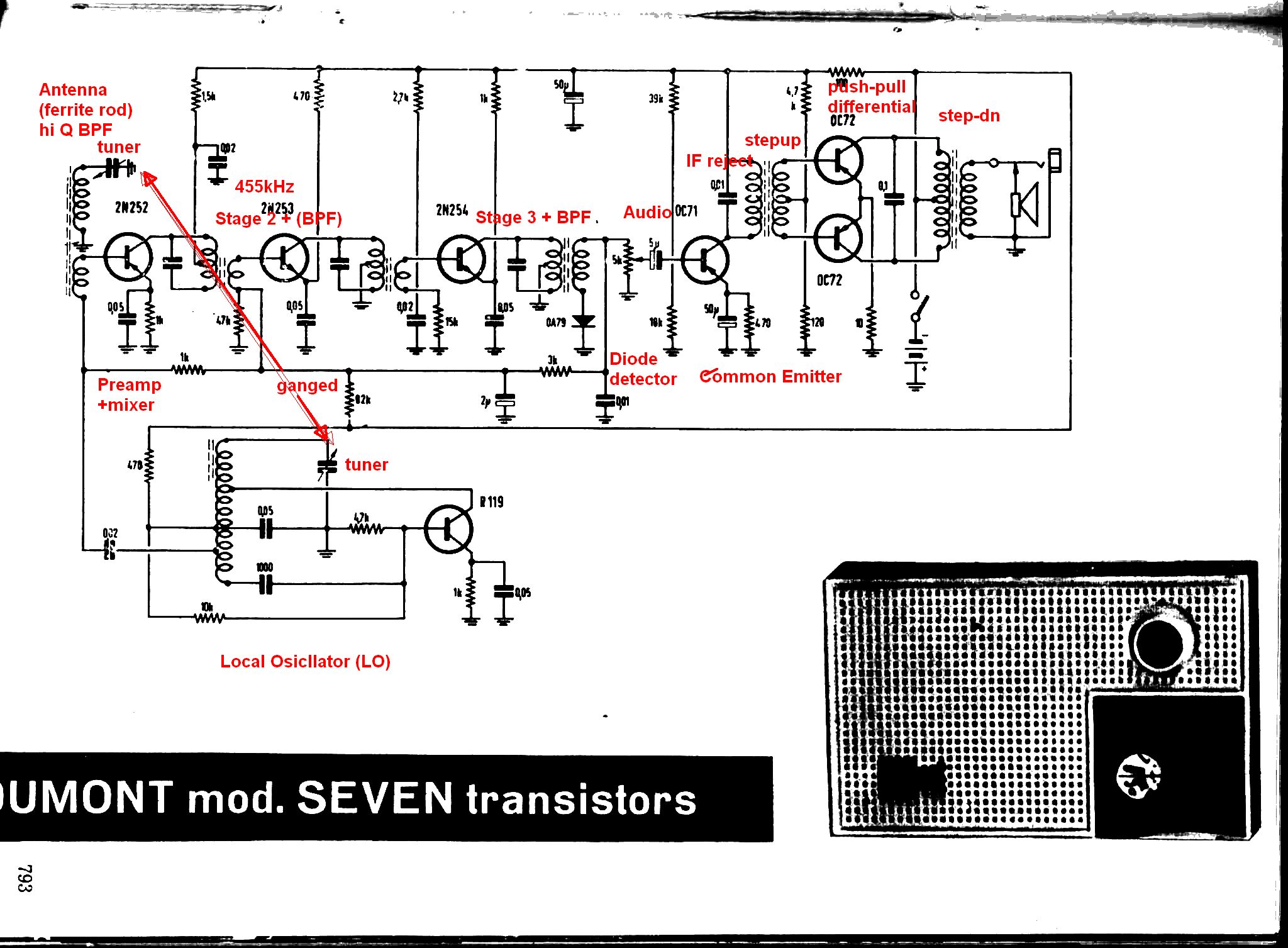 This is taken from a 60's vintage pocket AM radio

Not the answer you're looking for? Browse other questions tagged transistors amplifier audio speakers saturation or ask your own question.