I am working on a simple adjustable DIY power supply using an LM317 voltage regulator. J1 in the image below represents the transformer rated at 18VA, which rectified produces about 25V DC. The output range should reach roughly 12V, 1A.

Interestingly, I've found a 12V DC fan/heatsink ripped out of an old Nvidia 9400GT to cool down the LM317. I am considering one of two ways of connecting it to my circuit.

The first option is to connect it across the last large filter cap C2, with J2 and J3 representing V+ and GND connections of the fan respectively. 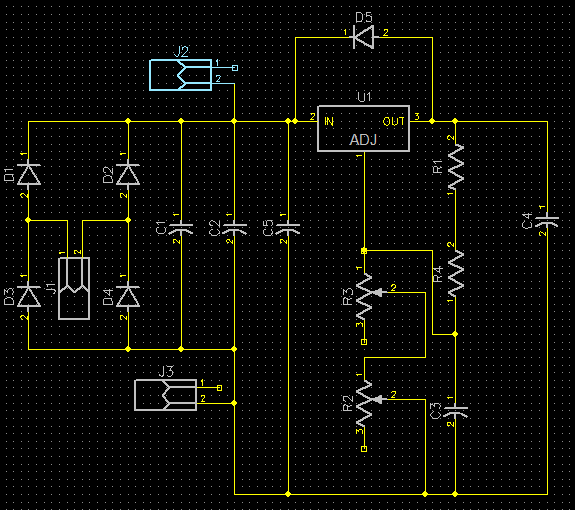 1) Am I correct in saying that the first option would be essentially placing it in parallel with filter cap and the voltage regulator and therefore would place it permanently at 25V, whereas the second option would drop my voltage input to the regulator by 12V, and the fan would only be at 12V?

2) What are the advantages to choosing the second option over the first?

Edit: Based on the suggestions of @AndyAka and @DoxyLover it seems that placing the fan in parallel with the filter caps is truly undesirable given the input voltage to the fan, whilst the placing it in series also causes more problems.

3) Would it then be advisable to use an additional 317 to regulate the voltage input to the fan in such a configuration? 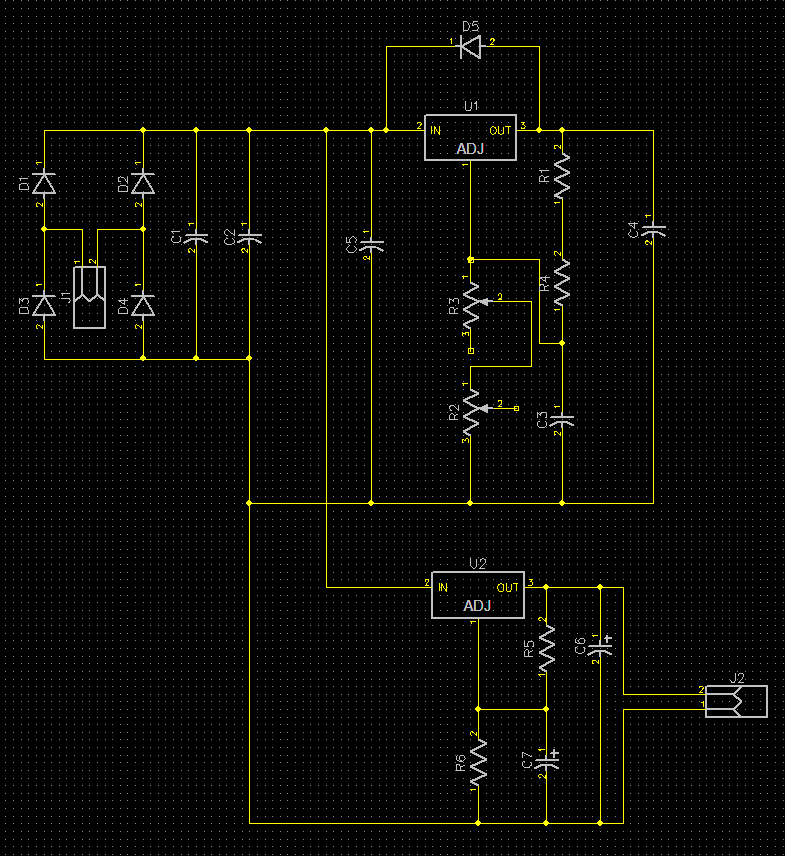 It's a bad circuit that you are trying to fix. Use a smaller DC voltage to feed the LM317 then it won't get anywhere near as hot. Currently, with 25 volts in and 12 volts out, the LM317 is "dropping" 13 volts and, if the load is (say) 0.5 amps, that's a power loss in the LM317 of 6.5 watts and it will get even higher under heavier loading conditions.

So, my advice is choose a more suitable transformer with an output AC voltage of about 12 V. Then you will probably have enough spare power capability to run the fan from a regulated 12 volts provided by another LM317.

In the first case, the fan is indeed receiving 25 volts as you suspected and will burn out quickly.

In the second case (ignoring the errant line shorting out the fan) the ratio of voltages across the fan and regulator inputs will vary depending on the load on the regulator. In fact, under heavy loads, the regulator will have an effectively lower input resistance (trying to draw more current) and the fan will be starved of voltage. Thus the fan will slow down, just when you need it more. This also ignores the problem of the regulator trying to cope with the fan conducting more or less current as it goes through a revolution.

Either follow @AndyAka 's advice about lowering the input voltage or change to a switching regulator, at least as a first stage, if you need the cleaner output of the linear regulator.

Not the answer you're looking for? Browse other questions tagged power-supply voltage-regulator fan lm317 diy or ask your own question.

4
Is this 7805-based design correct?
3
LM7805 circuit not working when 12V source is also driving another load
1
LM317 Voltage Regulator + ammeter = firecracker?
3
LM317, supply connected to output
0
Reduce voltage after AC-DC rectification before step-down
0
Can I use the wrong end of a voltage regulator?
2
Current regulation before or after voltage regulation?
0
Why is a 12V 3-wire CPU fan very slow at 12V input?