Using NPN transistors as on/off switches for a LED circuit

I have a very basic LED circuit: 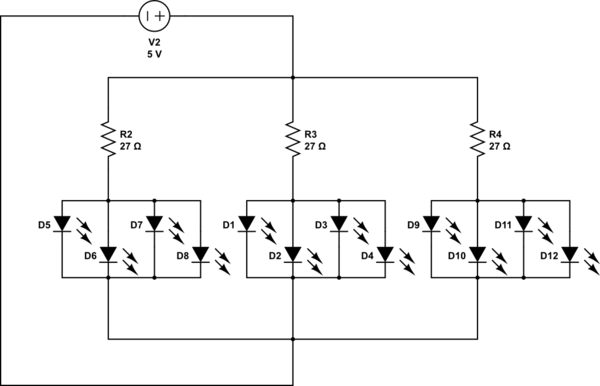 All D# are 3Vx0.02A LED. In order for this circuit to work, we need a 25Ω resistor for each LED quartet:

Now, I want to add an Arduino in order be able to power on and off each LED quartet programmatically. I don't want to overload the Arduino, so I thought it would be ok to have an external power supply which will give the LEDs all the current they need to work, without worrying about burning the Arduino itself.

I thought I could either use transistors or MOSFETs as logical on/off switches, but I chose transistor because they are way less expensive than MOSFETs.

I thought about getting a 2N3904, because it supports up to 200mA and the circuit requires 0.08A per LED quartet.

So far I know the circuit should look something like this: 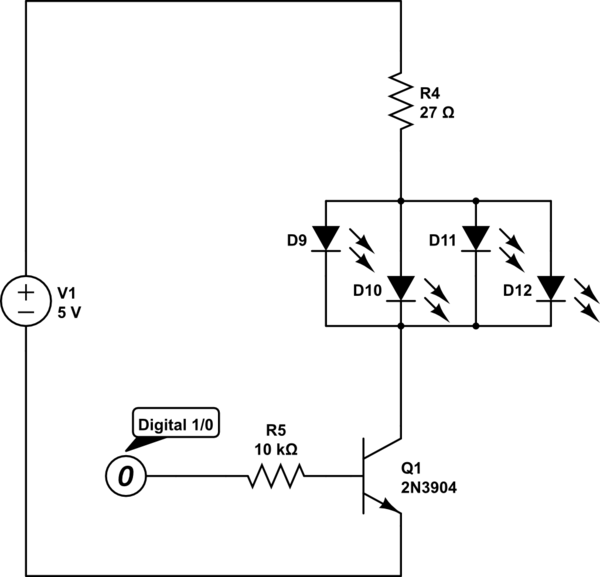 I'm definitely not an electronic expert, I assumed it should be like that because I looked a site which talked about Arduino controlled LEDs via transistor used as on/off switches. It didn't explain a thing, it just had the circuit so what I want to ask is: why the 10kΩ resistor? Is the value right? Do I need a 1/4W 10kΩ resistor or a 1/2W one? The 27Ω resistor should remain 27Ω or should be changed when a transistor is introduced?

Your basic concept is right, but there are some issues:

In any case, 10 kΩ is likely too high. Working backwards, that provides 430 µA base current, which means you are relying on the transistor to have a gain of at least 186. That is well above the guaranteed minimum, so 10 kΩ is clearly too much resistance.

The 10K ohm resistor is there to reduce the current the Arduino's output will need to provide. Otherwise the Arduino will be "looking at" about 0.6 volts which it will try to pull up to about 5 volts. Something will have to give and it will probably be the Atmel processor's output.

So, that is why you need to go through a resistor. But why 10K ohms? Most common transistors will have a beta of about 100. That is, the base to emitter current x 100 is about equal the collector to emitter current.

So, the current in the base to emitter path is ((5V - 0.6V) / 10,000) or about 0.44mA. Multiply that by 100 gets you 44mA for the collector to emitter current. Which is less than the 80mA you had calculated was necessary. So your circuit may not work. To make a circuit that will work consider changing this resistor from 10K ohms to 5K ohms or even 1K ohms.

Also, you should avoid grouping LEDs using a common current limiting resistor. This could lead to several problems. One of which could be unevenly lit LEDs. Instead consider the following example from http://playground.arduino.cc: 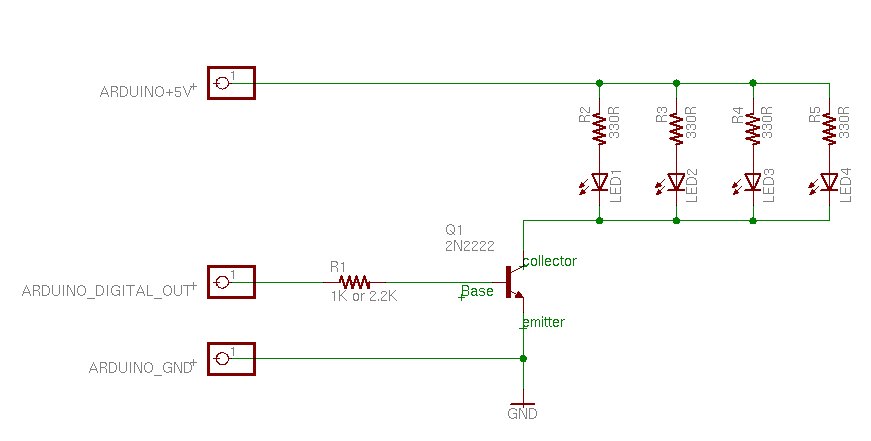 If you want to read more about using transistors as switching read this web page.