Is this the correct way putting multiple chips into one JTAG chain?

I am thinking about a hobby project that have a microcontroller and a CPLD connected together. Is this the correct way doing it? 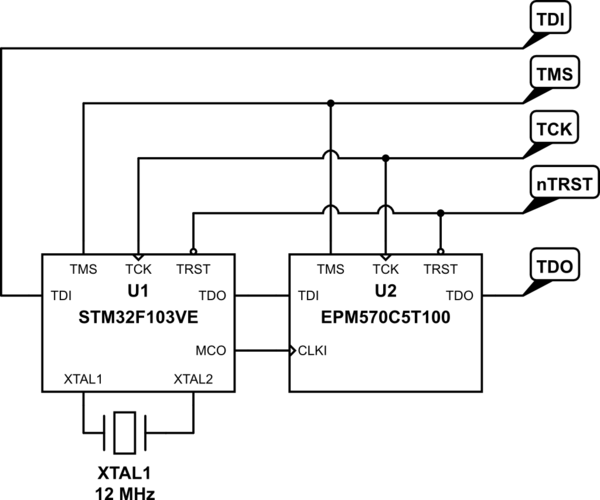 You've got a few questions there, I'll try to address them in order. First, for JTAG:

Conceptually, yes, that's correct -- JTAG is a chain / a shift-register and you've connected it as such. At a system-level, here are the thoughts I have:

The most common issue I see folks run into are "broken" chains, where TDO doesn't make it out because one of the parts isn't there (removable add-in cards), is off, or otherwise in a state where JTAG is in-operable. Adding a bypass resistor that can be loaded to short TDI/TDO across a part may be a good idea.

Other issues include poor signal integrity on TCK -- I was on a project where the designer had TCK fanning out to I think 10+ nodes across many circuit boards, with no re-driving whatsoever. As you may imagine, the chain was basically unusable due to all the reflections and horrid signal integrity.

Is there any "standard" pinout I should follow when designing the JTAG connector?

No, but as you stated, there are pseudo-standards from the vendors, like Altera's for their USBBlaster/ByteBlaster/etc, or the "standard" ARM pinout for a J-Link or similar. What you need to consider is:

In either case, you have to provide at minimum: VCC (for sense), GND, TCK, TMS, TDI, TDO and TRST# for a minimal JTAG implementation. ESD protection isn't a bad idea here either.

How to debug both chips at once, if it is even possible?

This is all on the host SW end -- you can do this, as long as your SW (urjtag, OpenOCD) can juggle the state of both parts, but it's tricky. I don't know what your application is, but my gut says you're going to spend most of your JTAG time for the CPLD programming it and maybe hooking into a ChipScope / SignalTap ILA instance. For the MCU, I can see more detailed debug going on for SW with a Segger J-Link or similar -- in this case, the debug software just needs to be intelligent enough to support a JTAG chain where it will over/undershift appropriately to handle the extra device in the chain. Ideally, the CPLD sits in BYPASS and simply adds an extra padding bit/clock cycle to the JTAG master.

Is it a good idea to share clocks between the two chips?

Sure, it saves you another oscillator, assuming electrically it works (VIH/VIL/etc.) and precision requirements are met. Are you OK with the CPLD being "dead" if the MCU doesn't come up first? It enforces a dependence in the system in terms of power-up order. I might add a RESET line driven by the MCU to the CPLD as well, so your MCU can hold CPLD logic in RESET, start the clock, and then de-assert RESET. I don't recall if that family of Altera part has an internal RC oscillator used for initial configuration.

As for EMI/EMC, that's out of scope here for this question (IMO), but follow best practices for a single-ended clock signal. Don't make it any longer than you need too, use series termination if needed, and use spread-spectrum if needed / tolerable.

What is a good bus interconnect for the two chips?

I don't know what your application is. SPI is simple and requires very few wires. Parallel would certainly work, but again, I don't know the data-rate or latency requirements, but of course it is more traces.

Not the answer you're looking for? Browse other questions tagged microcontroller jtag programmable-logic or ask your own question.