Why for a dipole antenna half wave length is optimum size?

For a dipole antenna, half wave length is optimum size. Why is this so? What I understand is that radiation resistance of antenna is around 50 ohms at this size, which matches with the characteristic resistance of transmission line and hence less reflection loss. Is this reasoning correct? If yes, then why transmission line cannot have lower resistance? If no, what is the reason?

Actually, a center-fed dipole that is slightly shorter than 1/2 wavelength (using the speed of light in a vacuum) might be considered "optimal". The reason why this is so, is that for such a dipole, the capacitative and inductive reactances cancel each other, making the impedance of the antenna purely resistive. 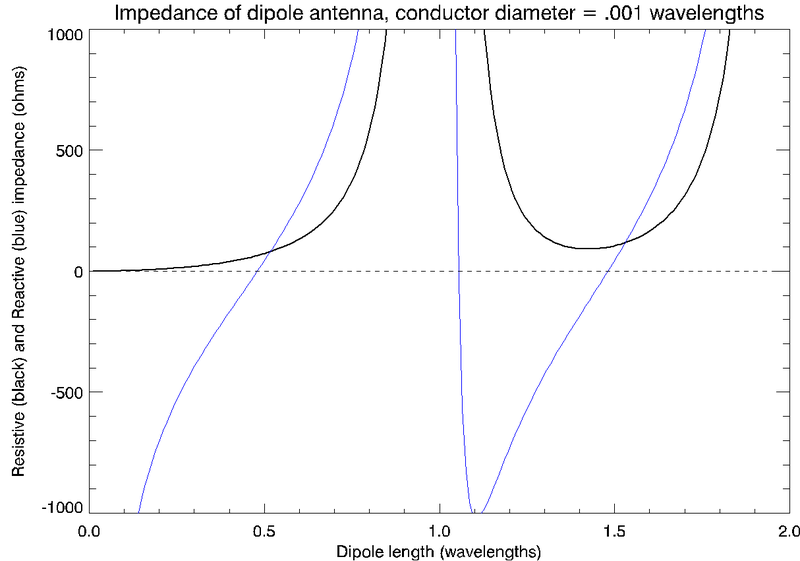 A couple things. First, a center fed dipole antenna that is slightly shorter than half wave length is in resonance, which means its impedance is purely resistive. Typically, its impedance is about 70 ohms.

I think by transmission line resistance you mean impedance. You can make transmission lines with impedances lower than 50 ohms, but these are not common. Most coaxial cable is either 50 of 75 ohms, with 75 ohm being less lossy for a given diameter.

The characteristic impedance of a transmission line is proportional to (the square root of) the ratio of inductance to capacitance (per unit length). So, to make a much lower inductance transmission line, you might need to make the wires thicker than the distance between their centers, which is very hard to do at reasonable costs and geometries.

42
Why is 50 Ω often chosen as the input impedance of antennas, whereas the free space impedance is 377 Ω?