How does this continuity/mains tester detect microwave RF? 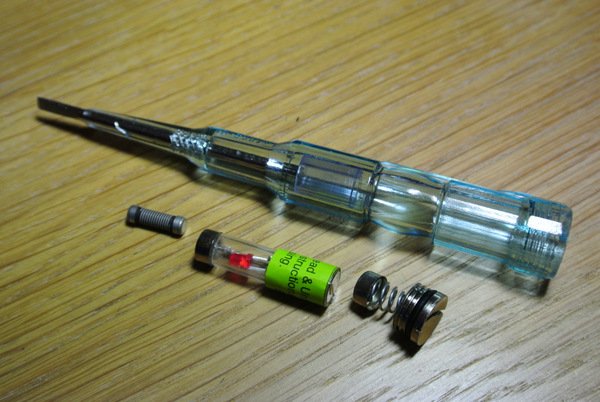 This tester can detect leakage from microwave oven above a certain value (among its other uses). It has only resistor, transistor (darlington), LED and two batteries. As far as I understand, it can detect hot wire without making a contact with the wire thanks to the capacitive coupling effect.

But, how does this continuity/mains tester detect microwave oven RF?

The E-field for microwave is AC modulated and gets rectified to look like E field from proximity to line signals near outlet.

The plastic has ~7kV/mm insulation and a dielectric constant ~ 4 with a coaxial conductor in the probe to feed the Darlington which rectifies the E field current in ~<=1uA to ~ few mA pk drawn from the Lithium 3V*2 cells which have inherent current limiting to < 20mA from ESR.

The proximity effect is inverse squared per mm gap from the slot which also acts as an RF antenna (perhaps minimized by geometry).

The oven is also well shielded by the Faraday cage with holes in window shield < 5% of lambda in the door unless extremely dirty on the seal creating a gap with E field leakage.

Microwave ovens were also known to cause EMI on analog cordless phones due the 120 HZ modulation of the magnetron's E Field. Shielded pacemaker technology is no longer threatened by this leakage.

This is a useful tool but the LED energy comes from the battery.

Contrary to myth that microwave ovens heat from the inside out, the polar properties of moisture conduct well with ions (salt) but still has skin effect but since much lower frequency ( by several decades) than conventional thermal ovens which do have a much shallower skin effect.

Microwave has a deeper skin depth in food. Research has shown BBQ is the worst for harmful effects on food due to transformations from burning. Contrary to the myth that microwave cooking is harmful, it is excessive food temperature that is harmful. Just consider the frequency of a 1um thermal wave.

At one time the crystalline structure of some dentist amalgam fillings were once known to act as piezo AM detectors and hearing works with vibration on any bone in the head. So in rare cases, some could hear strong AM radio stations.

The Darlington base-emitter junction is a rectifier, or a diode. With only a few milliVolts on the base, nothing happens.

With 20 or 30 milliVolts, you get significant 2nd-harmonic current flow which, added to the fundamental, becomes IMBALANCED.....i.e. there is a DC shift and this DC_shift turns on the transistor.

Model this in SPICE; apply 2GHz at 20milliVolts PP thru 1pF cap, in a transient simulation, not AC simulation.

Not the answer you're looking for? Browse other questions tagged microwave tester or ask your own question.

10
How does this continuity/mains tester work?
9
Can I improve the directivity of an X-band radar module with integrated plane-patch antenna?
2
What does this capacitor do? (Microwave biasing circuit)
2
A question about the current value in a mains tester
1
does my microwave oven have acceptable leakage?
0
What is this microwave component?
0
How does a microwave oven modulate its output power?
2
How to unground microwave transformer
0
Does this circuit detect frequency or magnetic field?