Diagnosing cause of electrolytic capacitor failing

I am hoping somebody could help me diagnose the cause of failing electrolytic capacitors in a circuit. The context is a charger circuit, more specifically its power supply unit:

Given a diode bridge rectifier that is connected on one set of terminals to the mains via a filter circuit and on the other side to two electrolytic capacitors connected in series. Parallel to each capacitor are two discharge-resistors. (And of course the actual consumer circuit.)

The problem is, one of the two capacitors in series, the one connected to the - terminal of the diode bridge, explodes. This fault occurs since the device was subjected to intermittent AC-supply: unstable frequency, probably over- and under-voltages.

I am wondering where to search for the problem:

The capacitors in question were 200Vdc, 1000uF for a device to be plugged into 230Vac. I replaced both after the first failure, plugged it in and immediately the same capacitor blew again.

Unfortunately I do not have access to an oscilloscope at the moment but only a digital multimeter.

I took a closer look at the PCB and got the following partial schematic. The main transformer is in the top left hand corner. The PWM IC chip etc. are connected to the hanging MOSFET the the bottom of the schematic.

The TRIAC is part of a STR 81145, which automatically switches to voltage doubling mode if input is 115V. (It takes it's supply from the positive rail as well.)

After removing the capacitors in question, C7 & C8, the resistance to the positive and negative rails are equal to the 50kOhm set by the voltage divider. 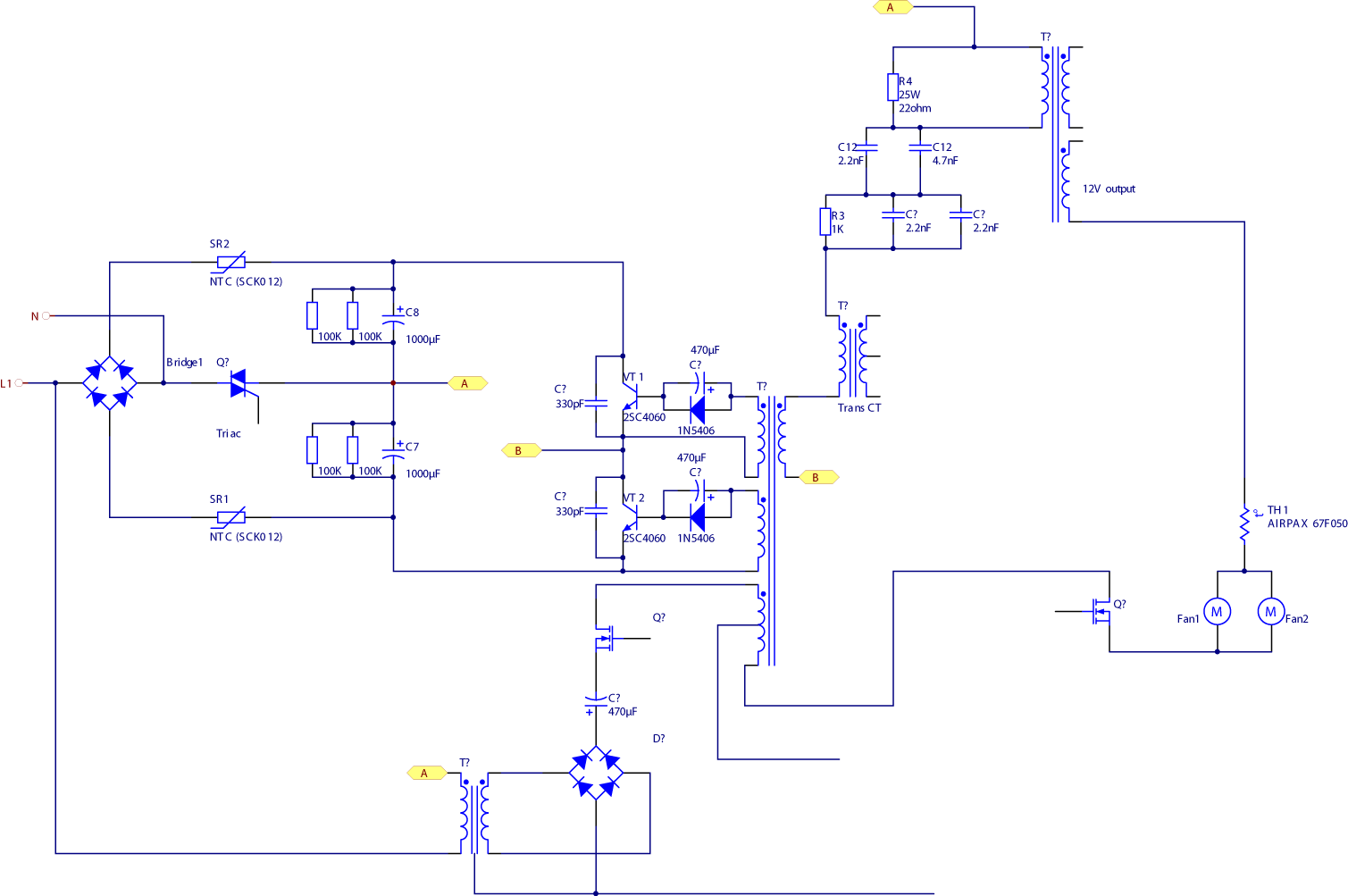 If there are differences in manufacture, then the ESR of the capacitors will be slightly different, and one will see more voltage than the other.

Also, there may be a max amperage for the capacitor, and given that a capacitor is akin to a short when it's empty, you may get too much surge current (check the ripple current rating of the capacitor data sheet.)

The two capacitors that were connected in series are probably rated for lower voltage than the one that the power supply actually produces. In this case, if one of the capacitors gets shorted or something, the other sees the full supply voltage and goes explodes.

Replace both capacitors with ones that are rated for more the full power supply voltage, assuming there is enough space in the device.

It seems likely that the centre point of the two capacitors connects to the equipment concerned and that this centre point is connected to the positive rail by a fault - possibly due to a shorted switching transistor or a shorted diode - see below.

You do not say what is connected to the capacitors, but usually such an arrangement is a bridge circuit with the capacitors forming one centre tapped "leg" of the bridge and two transistors forming the other "leg" with the load connected between the two bridge legs. Look for two largish transistors possibly MOSFETS, probably on a heatsink and probably the same model / part number. The one which connects to positive will quite possibly be short circuit. Note also the reverse diode possibility as described below.

The diagram below shows the general arrangement diagrammatically - here if Q1 is short-circuited it will destroy C2.

The diagram below is functionally the same but more complicaed and more like what you'd see in practice. Again, Q1 is short-circuited it will probably destroy C2 BUT the diagram is harder to follow - trace the path from +ve via Q1 then on to C2. Shorting the reverse diode across Q1 will achieve the same result.

Both diagrams are from here

Not the answer you're looking for? Browse other questions tagged power-supply capacitor charger electrolytic-capacitor fault or ask your own question.