Lithium Battery Protection Circuit - Why are there two MOSFETs in series, reversed?

I was studying a battery protection chip and reference circuit (below) commonly used in cell phone Li-ion batteries, and am confused by the two MOSFETs in series on the negative terminal EB-.

According to this question, I now understand that MOSFETs can conduct in either direction S-D or D-S.

My questions are: 1. Why are there TWO MOSFETs in this circuit? Why not just one? 2. If they conduct in either direction, why are FET1 and FET2 installed with opposite polarities? How does this benefit the circuit? 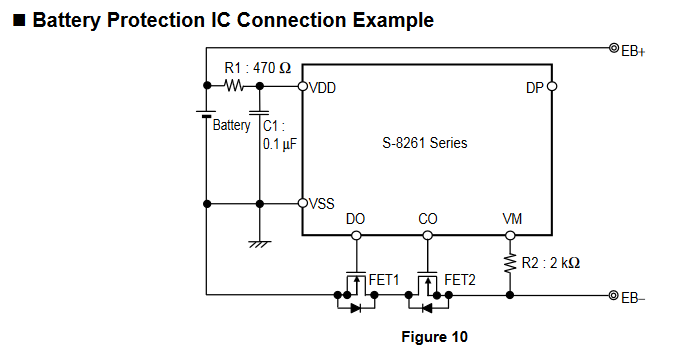 It's for two reasons.

Well, actually just for one, but with two factors.

A MOSFET can conduct in both directions when turned on, as it truly is just a resistive channel that is opened or closed. (Just like a tap, it's open with a tiny resistance, closed with huge resistance or a small gradation in between.)

But, a MOSFET also has what is called a body diode, which is indicated by the little arrow. That body diode always conducts when it is forward biased. It looks a bit like this:

This is inside all MOSFETs, due to their internal construction, so it's not an option. Some MOSFETs are manufactured specially so that the diode becomes more useful to certain applications, but there's always a diode there.

As pointed to in comments; the Body-Diode is a consequence of the substrate connection. I remember seeing a rare one or two MOSFET types with that connection on a separate pin, but they'd be hard to find. (And you would likely want to connect the pin normally anyway, for current capability)

This means, that if you use only one in a current path that can conduct in two ways, one way will always conduct with approximately one diode's voltage drop.

Sometimes you want that, sometimes you don't. When you don't you connect two MOSFETs in reverse, and the total picture becomes this:

When the one body diode conducts, the other blocks and vice-versa.

Now in the case of a battery protection, both MOSFETs are connected with their gate to an independent I/O pin, because when the battery is empty, it is allowed to be charged and when it's full it is allowed to be discharged. So the chip only turns on the MOSFET whose diode blocks the allowed directions, and if the battery is at one extreme of its use-case, its body diode will at least allow current in the other direction, even if the over or under voltage situation persist a while after current starts flowing.

Whether or not this might cause problems with MOSFET heating when a battery behaves super weird is a separate point and has up to now be proven to be not an issue. Usually the body diode only conducts a fraction of a second before the over/under voltage disappears and both MOSFETs turn back on.

The diodes shown in the schematic might have indicated this fact (my eyes glossed over them initially), but it's equally likely they intend for you to place better diodes to support higher safe discharge currents from a full battery or charge currents into an empty one.

Refer to the "Cutoff FETs and FET Driver" section in this document.

Not the answer you're looking for? Browse other questions tagged mosfet battery-charging lithium-ion protection or ask your own question.

32
In an NMOS, does current flow from source to drain or vice-versa?
19
Do MOSFETs have a diode built into them?