The bandwidth of category 5 and 5e is the same (100 MHz) and the physical cable construction is the same, and the reality is that most Cat 5 cables meet Cat 5e specifications, though it is not tested or certified as such.

So what does cable bandwidth mean? is it correct to say that cat 5 cable frequency response is almost flat in a region with 100Mhz width and 3-dB attenuation? Something like this with B=100Mhz: 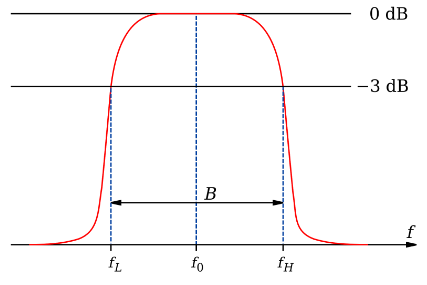 If correct, what is f0 frequency for cat 5 cable?

If we want to send digital signal with some simple line code such as NRZ, what will be the duration of a bit (bit time) in milliseconds?

Basically the quote you have shown was written by someone who either didn't understand what they were talking about, or oversimplified it.

The "insertion loss" which is a measure of the gain of the cable is dependant on both frequency, but also on length. The longer the cable, the more lossy it is.

Here is one example of the insertion loss of a CAT5e cable, this for a 100m length:

Here we see that at 100MHz, the loss is actually more than 20dB - a lot more than the 3dB (power gain) or 6dB (voltage gain) point that would be used to specify the bandwidth of a first order low-pass filter as the quote implies.

Further up the Wikipedia page more accurately explains where the 100MHz figure comes from:

The specification for category 5 cable was defined in ANSI/TIA/EIA-568-A, with clarification in TSB-95. These documents specify performance characteristics and test requirements for frequencies up to 100 MHz

Basically, the requirements in terms of insertion loss that must be met for a cable to be classified as Cat5 are only specified up to 100MHz. Beyond this point the specifications of the cable are undefined by the standard - though manufacturers may well provide data at the higher frequencies.

In terms of how the Ethernet speed relates to frequency, that is a touch more complex. The raw data is encoded using various schemes which are described in brief in the wiki page here. For 100BASE-TX, several encoding schemes are used which result in a maximum fundamental frequency of 31.25MHz through the cable itself.

The difference between Cat5 and Cat5e is in the way the cables pairs are twisted. The twist in a Cat5e is tighter and this is done to reduce crosstalk.

Fast ethernet (100Mbps) uses only 2 pairs (one for TX and one for RX). Gigabit ethernet uses all 4 pairs for RX and TX at the time (using echo cancellation) which makes it very sensitive to crosstalk.

Not the answer you're looking for? Browse other questions tagged cables bandwidth or ask your own question.

0
what is meaning of infinite bandwidth of an amplifier
2
Merit and meaning of fractional bandwidth
6
Why is Cat5/Cat5e Ethernet cable rated 100MHz?
4
Splitting a cat 6 cable through wire/cable connectors
0
Structure of Pairs inside a Cat Cable
0
Can you use cat 5/6 ethernet cable to power devices?