Why am I measuring earth to line voltage as zero? Is that what it supposed to be?

I have a confusion about the topology below: 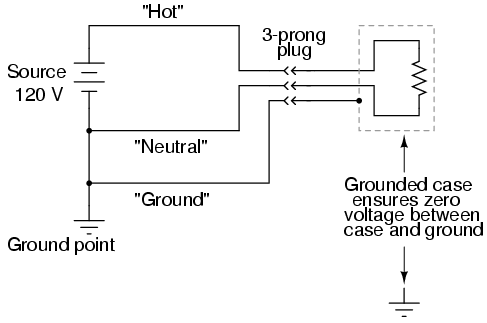 I was wondering the potential difference between the line and earth. So I decided to check this through a 3-prong plug.

I thought I would read the same voltage as line to neutral, since neutral and earth are supposed to be connected.

But when I measure the voltage between the line and the earth, the voltmeter shows zero volts.

What does that mean?

If you are measuring 0V between the hot/line pin and ground, you either have a big problem or are doing something wrong.

The most likely option is that you have your multimeter set to DC voltage rather than AC voltage which would result in the average DC level being measured which for an AC waveform is theoretically 0. You could also be measuring the wrong pins on the plug, but that I imagine is not the case.

The alternative is that your plug or house is incorrectly wired such that the neutral and hot/line pins are swapped over. In theory (from an electrical standpoint) this shouldn't cause a problem, but in practice and from a safety standpoint it is a big issue in devices which don't have an earth pin and assume that the neutral will be at earth potential.

Not the answer you're looking for? Browse other questions tagged voltage earth line or ask your own question.

3
Why is it safe to touch the chassis of a tube amplifier and something earth grounded simoultaneously?
13
If voltage is measured between two points on a wire, with no resistance in between is the voltage zero?
5
Does potential difference exist between Earth ground in geographically diverse locations?
2
How to discern earth from neutral?
2
Why is the outlet ground voltage different from grounded Macbook voltage
53
Why is main's neutral tied to earth?
1
Why does the USB-C plug shell carry a voltage?
0
Floating Source Voltage Difference to Earth
2
100VAC between concrete floor and outlet ground