How to improve my curve fitting for an LED in spice

I have an LED that I'm working with, actually it's not a discrete part but on silicon. Anyway all I have is a curve for it and I was trying to work up a spice model in LT-spice. I followed this question and tried two methods from there with Martyn's python method giving me the best results.

Which gives me a curve that is close to my original data points at low voltages but diverges at higher voltages like so: 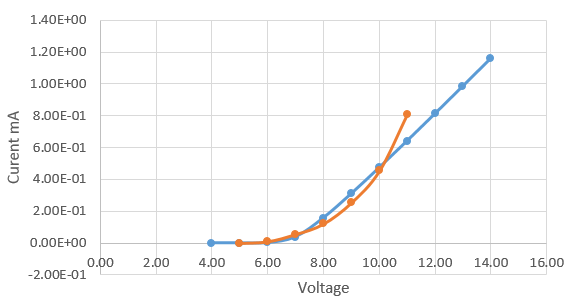 Orange is the measured data and blue is the model.

I've tried adjusting the parameters manually for a few hours but I can't seem to get something that matches the higher end. I feel like either I'm missing something or maybe I need to add another element other than just a diode? I seem to remember opening some professional models and seeing a few components inside.

How can I make my model match my actual datapoints better?

You mentioned professional models with a few components inside. A full device model certainly may include some AC components to deal with charge storage and inductance. But you are developing just the DC model. So don't worry about those details here.

The DC equation is a modified Shockley equation that looks something like this:

As \$V_T=\frac{k T}{q}\$ and is temperature-dependent, you do not want to complicate your life by making temperature yet another variable. So make sure that you control the diode's die temperature and keep it a constant. The best way to do this is to:

(Or you can use an elevated, stable temperature heater to keep the LED at some fixed temperature.)

Let's look at the overall resistance illustrated by the above equation. This is found by computing \$\frac{\textrm{d} V}{\textrm{d} I}\$ of a slightly simplified version (ignoring the +1 term for now):

There is a third region which can't be seen from this equation, but is present in the fuller equation presented earlier above. This is where \$I \approx I_S\$. You will need to stay away from this area because it is near here that the ignored +1 term matters more and complicates your life.

Region II may not heat up the LED die that much (good.) But Region III likely will, so you probably need pulse measurements for that region.

For Region II, you are attempting to figure out the value of \$\eta\$ and \$I_S\$. If you plot Region II measurements on a \$y=\operatorname{ln}\left(I\right)\$ vs \$x=V\$ curve, you will find that they fall on a fairly linear line. If not, you aren't fully within the region. Region I will curve away from the line at very low currents and Region III will also curve away from the line at very high currents. So you need to find and then make your Region II measurements in the linear area between Region I and Region III.

(There are transitions between these three Regions, too. Stay away from those transition areas, as well.)

Once you have these Region II measurements, \$\eta\$ is then inversely proportional to the slope of the plotted line. \$b=\operatorname{ln}\left(I_S\right)\$ is the y-axis intercept. If you make more than two such measurements at different values of \$I\$, then a standard linear least squares fitting routine can compute the slope (\$m\$) and intercept (\$b\$) for you. The slope you get from this will be \$m=\frac{1}{\eta\, V_T}\$, so just solve that: \$\eta=\frac{1}{m\cdot V_T}\$. The intercept will be in terms of \$\operatorname{ln}\left(I\right)\$, so you need to raise \$e\$ to that power to get \$I_S\$. Such fitting algorithms are everywhere. So you shouldn't have any trouble with that. (If you only make two measurements you can use simple algebra to figure out the resulting slope and intercept.)

To get \$R_S\$, you need to use large, pulsed currents in Region III, with those long delays between. Just two such measurements should be enough. (Again, to figure out where Region III is, you need to take a variety of pulsed measurements to probe that region and find out where it lays. Pick currents that require voltages well past the knee, here.)

Again, take at least two good measurements in Region III. More is okay, but then you are back to that least squares fitting routine again. From these you can figure out the slope. And the slope is the value of \$R_S\$.

One thing I can see from your curve is that I don't think you have enough data to figure out \$R_S\$ well. You'll likely need higher current measurements.

All this should give you some ideas about how to figure things out and it manages to avoid overly complex mathematics by focusing on the dominant issues at hand in each region.

I assume that the blue curve is your actual LED device and orange is trying to predict its characteristic. The blue device is clearly an LED in series with a resistor so your model needs to be put in series with the model of a resistor.

Here's a picture of the forward characteristic of an LED with resistance added in series: -

As you can see, adding the resistor linearises the response above the basic point where forward conduction begins. Picture stolen from here.

When you plot Log(Id) vs. Vd and do not get a straight line, this means it's never going to be fit well by the standard model. In general you should always extract exponential modeled data (diodes or transistors) using Log(I) data because this means you'll be fitting a straight line (which is amenable to linear regression).

So first: are you using Log(Id) data to do the parameter extraction using linear regression to obtain IS and N? If not do this first!!

If that still doesn't work, the short answer is the diode model in SPICE presumes the diode is "ideal" (classic diode model equation) so when it's not, it won't fit and there's nothing you can do with the base model to improve that.

The standard fixes for this are 1) choose a corner most relevant to your particular application that needs to fit best and only worry about fitting that corner (e.g. make certain parameters that dominate that operation regime more accurate), or 2) use a macro-model using subcircuits to hack your way to a better fitting model. Each has issues.

This is BTW a super common issue with SPICE - the models are nothing like real devices most of the time so you have this issue. This is part of why the profession of "SPICE model extraction" can never be made "turn-key" run by monkeys. For example, pretty much all the semiconductor models are based on 1-dimensionally uniform devices but every real device has side-walls that have active PN junctions or doping. You have to think about the device manufacture and device physics to know how to model that.

For economically important technologies like MOSFETs companies can afford to research and invent new models that fit the current technology better. For most everything else we are still using 1970 vintage device models which are baked into SPICE. Since pretty much EVERY variant of SPICE (PSPICE, HSPICE, LtSPICE, etc.) is no more than 1%-3% deviation from the original SPICE, so the issue persists.

Here's a paper on LED modeling for better fits that might be helpful if you want to go the "macro model" route:

Your numbers are way off from what are seen in typical III-V LEDs. The rs is very high, for one. And n is more often in the 2-3 range. But if these are silicon LEDs, that's a pretty odd beast, and anything might be possible.

You might want to talk to whoever designed the device (I'm assuming it's a research device, not something bought off the shelf) and see what they recommend.

Often when modeling odd devices like this, finding out what the parasitics are is critical to getting a good model.

For example, you might need to include a resistor in parallel with the main diode to model a leakage path. Or a second (Schottky) diode in series to represent the metal-semiconductor junction at the contact to your LED.

As jonk says, if you stick to the simple parasitics allowed in the SPICE diode model, the rs term will give the slope at voltages well above turn-on. So you should match it to the slope in your measurement at the maximum voltage measured. Then keep that fixed while you adjust the other parameters to try to get a match to the rest of the curve.

Not the answer you're looking for? Browse other questions tagged diodes ltspice spice modeling or ask your own question.

137
How can I efficiently drive an LED?
38
How do I model an LED with SPICE?
0
Art Of Electronics - Bypass capacitor across D1 in Figure 1.82