Transistor with nfc doorlock on arduino

I'm pretty new to using transistors and I'm trying to make nfc doorlock. My electoric doorlock is working on 9V and 280-530mA, and have resistance about 20 Ohms. I'm powering it from external 9V power supply. I have transistor BC557 datasheet. I'm connecting output pin to base of transistor and putting between them 200 Ohm resistor. But tranistor won't go into active state. I'm using arduino uno r3, and voltage on output pin is almost 5V and can provide 20mA. What am I doing wrong? How do i calculate correct resistance?

I made schematic in paint :) 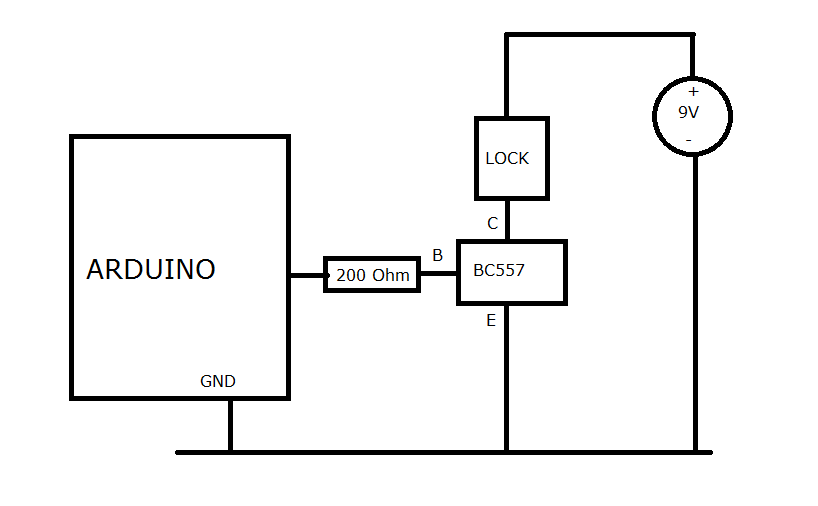 There are a few problems with that circuit.

You could use a "bigger" bipolar transistor, one with a Max collector current of more than 530mA. Again, playing safe, I would go for one with at least 1A maximum. However, 1A transistors typically have a low current gain and are difficult to drive from an Arduino. So for simplicity I would use an N-channel MOSFET. The following shows the schematic diagram. 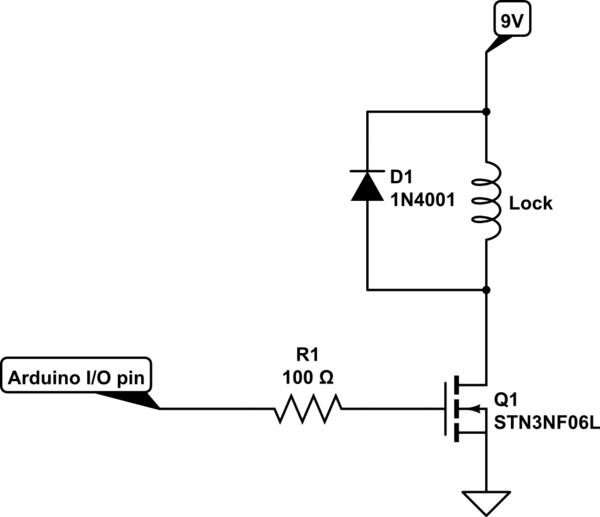 D1 is the back emf diode.

Q1 is a N-channel MOSFET. It's one that I am familiar with, although it is a surface mount device.

2
Arduino PWM shield with npn transistors
3
Low power serial bluetooth module with Arduino
3
Calculationg base-resistor between microcontroller and transistor
0
Arduino + transistor to switch PC fan on/off
1
How do I energize a 12v relay coil using a 2N2222 bipolar transistor?
1
How to drive low impedance load with arduino and transistor
4
Using a PNP transistor as a switch connected from a 74154 then out to stepper motors
1
Choosing correct transistor for simple Arduino 9V power switch
1
Simplest way to switch inductive load with arduino?