"Where" does back EMF appear in motor?

I've been trying to understand EMF, specifically back EMF in electrical motors, such as for example a setup like this:

Say that we apply a voltage to the brushes. I understand that once the rotation gets going, a current will be induced by the changing flux inside the loop, and that this induced current is opposite to the current created by the external voltage. My understanding is that this results in a smaller net current in the loop, and this phenomenon is called back EMF.

However, I don't exactly understand "where" the EMF (which is a voltage?) appears. One explanation I've seen is this: 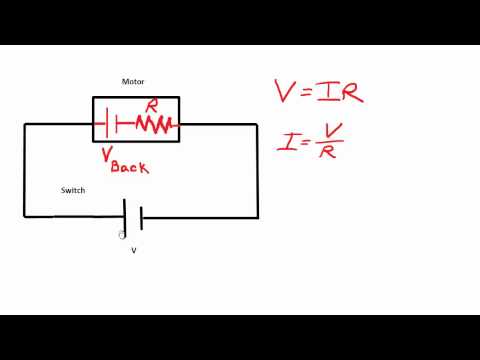 where the EMF appears as a voltage source in series with the motor resistance. While this may be a good way to explain how the current will behave, it doesn't seem to explain what actually goes on inside the motor. Surely, the EMF doesn't appear "before" the motor, but rather inside it. Should it then somehow be seen as being superimposed on the resistor? Where, in the first figure, would the EMF appear? Does it change the voltage across the brushes? Where does the "extra" voltage drop happen?

The back EMF is generated in the wire that makes up the coils of the motor. When a wire is swept sideways thru a magnetic field, a voltage is generated along the length of the wire. Spin the motor with just a voltmeter connected, and you will see it make a voltage.

So yes, the resistance and the back EMF are actually distributed along the wire in the coil. There are lots (infinity, actually) of little resistances in series that each get a little voltage in series with them when the motor turns.

Viewed electrically from the outside, this can't be distinguished from a lumped resistance in series with a lumped voltage source. Since this is simpler to draw, think about, and analyze, that's how motors are usually shown.

You can simplify things by removing the battery from that diagram, and turning the motor by hand, as a generator.

As the armature turns, the wires cut through the magnetic field, and a voltage is generated in them.

Think of it like a generator; you spin the rotor and an output voltage is produced. This voltage is in series with the rotor coil. It makes no difference if instead of manually spinning the motor you apply dc to turn it.

The back EMF "appears" across the slip ring brushes. Its polarity is such that it always opposes the "driving" voltage, causing a lower current draw than "normal." The "normal" current is found by locking the rotor and measuring the current drawn, then the rotor is allowed to rotate and the "running" current will be less than the "normal" current, due to the back EMF.

Good question: This is actually not so easy! It has taken me days to understand. Thanks to your pedagogic picture I finally got it!

You need to view it is as if the battery was disconnected from the circuit. So, you have a circuit without current running through it to start with. You spin the coil clockwise with your hands in the same way it would spin if the current was on. In the position you have made your drawing you have the right side of the coil moving downwards. So, you have the wire of the coil moving downwards, which means that also the positive charges in the wire coil are moving downwards (but not moving along the wire). With the rigth-hand-rule no. 1 you point your thumb downwards in the direction of moving charges, while at the same time you have your fingers pointing to the right along the magnetic field. Then you get a force from the palm of your hand pointing along the coil wire towards yourself in the picture. That is, you have positive charges (current in other words) moving in the wire towards the right-hand side brush.

So, you get a surplus of positive charges on the right brush, and surplus of negative charges on the left brush. So, you have gotten yourself an emf that works like a DC battery. The voltage potential of the emf is opposed the original emf created by the DC batteries. This creates a current through the circuit in the below part of the picture which is opposite in direction to the applied current by the DC batteries. As you turn the DC batteries on, you get a current that wants to go from right to left in the coil at the same time as it wants to go from left to right by the induced back emf. The faster you spin the coil with the DC current, the stronger the opposing back emf force will be also at the same time! So, this back emf always works against you.

Not the answer you're looking for? Browse other questions tagged electromagnetism induction-motor induction back-emf emf or ask your own question.

4
DC motor Armature and Field back emf
3
Is there an actual need for the concepts "emf" and "back emf"?
1
Is there back EMF in an induction motor?
0
Relationship between torque and back-EMF voltage | BLDC motor modeling
1
Understanding back EMF measurement in brushed DC motors
0
Phase angle difference between the induced EMF in the rotor and the rotating magnetic field in three phase induction motor
0
Inductor Back EMF Direction Relative to Changing Current
1
Back-EMF Concepts (Confusion)