I'm designing a PCB involving signals up to 6 GHz. I want to use through-hole SMA connectors like these: 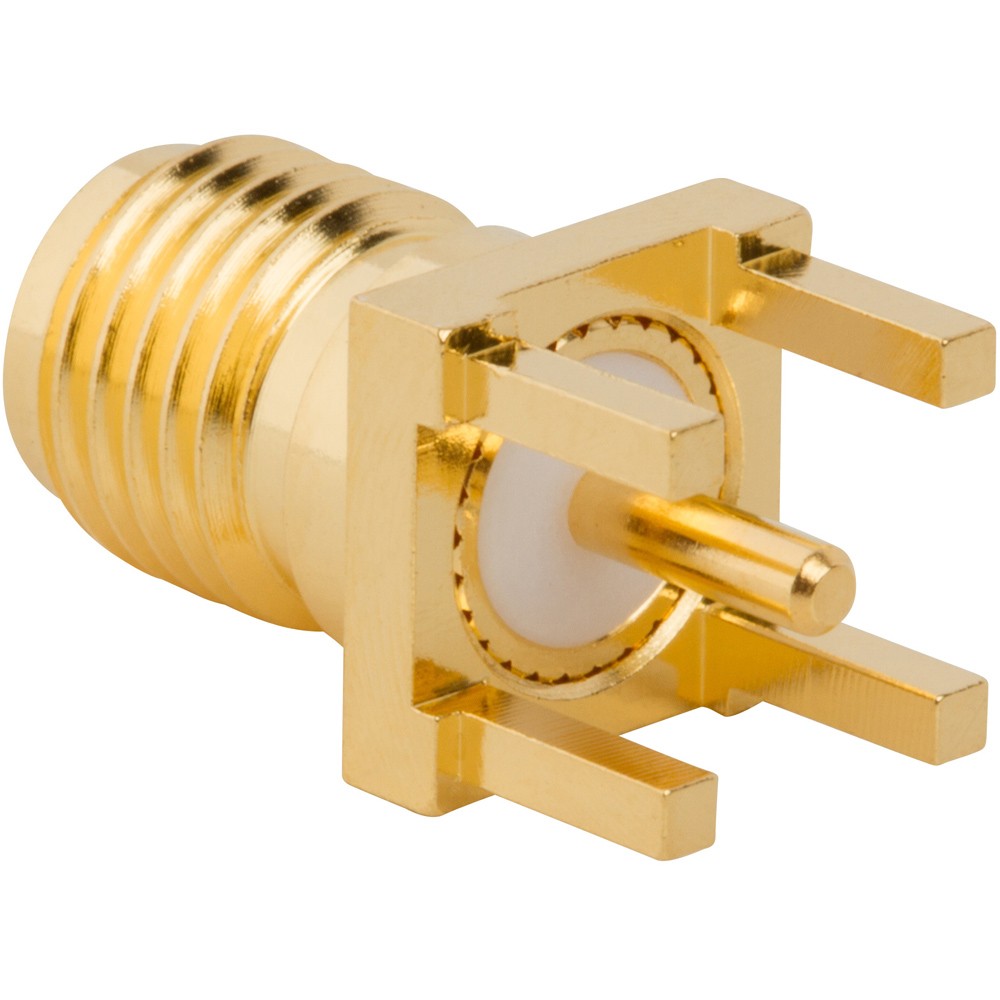 If I route the RF traces on the top of the board, will the center contact of the through-hole connector sticking out to the other side of the board have any significant effects (compared to something like an edge mount connector)?

(I have been looking around for advice on this but have not really found anything, apart from USB 3.0 application notes suggesting that the superspeed traces better be routed on the opposite side of the board when using through-hole USB 3.0 connectors.)

In case my description is not clear I'd be happy to provide pictures to illustrate.

Update: I think I'm going to go with edge launch connectors, just to be safe. Thanks for the answers.

When I worked at 1 and 2.5 GHz, we used these connectors without consideration for stub effects. Now, working at 25 GHz , we would just about never use them (even the variants with coax connector types appropriate for 25 GHz). However, your operating band is somewhere between there so these rules of thumb aren't especially helpful.

I agree with Andy's analysis that, especially if you trim the stub protruding from the opposite side of the board, this connector is likely to work well at 6 GHz. But you haven't said what your application is and whether you have particularly stringent requirements for VSWR or for insertion loss flatness across a wide frequency band. So I'll add a few suggestions.

Using an edge-mount SMA connector would produce a smaller discontinuity between the pcb trace and the connector.

In comments you asked,

Do you have any suggestions regarding the ground planes underneath the connector?

I'd pull all copper away (maybe by 3 - 5 mm?) from the stub part of the connectors center pin. (The stub is the part that isn't on the path from the trace to the other side of the connector). This will reduce capacitance between the pin and other nets (mainly power and ground) which I'd expect to reduce the impedance discontinuity. (The trade-off is it could increase radiation from the stub)

If you want to get really fancy, and your signals are not particularly wide-band, you could break out an EM simulation and probably find a way to add an inductive discontinuity (neck down the trace as it approaches the connector) to your trace to compensate for the capacitive discontinuity from the stub --- but I wouldn't advise doing this without being able to optimize it in simulation, and it's probably not justified if your application doesn't have especially strict VSWR requirements.

Assuming that the connector is fine for 6 GHz, the 3mm or so protrusion on the solder side would become an issue if 3mm represented about one-tenth of the wavelength of 6 GHz. This is a general rule of thumb and some people say one-twentieth but I'll stick with 1/10.

6 GHz has a wavelength of 5 cm and one tenth of this is 5 mm so, you could argue that it's beginning to be a small effect. Maybe just trim it back so that it barely protrudes.

If it were a quarter of a wavelength long then you would have effectively an impedance transformer that would look like zero ohms and that wouldn't be very good but, a quarter wave is 12.5 mm and you maybe have 3mm protruding (PCB thickness dependent).

Not the answer you're looking for? Browse other questions tagged rf pcb-design connector layout transmission-line or ask your own question.

9
Hand-routing PCBs for SMD
0
how to determine if system is matched in system
1
Is it possible to find through-hole, edge connector fingers?
5
Properly route through hole USB-C
8
USB 3.1 over PCIe board edge connector
1
Edge-mount SMA connector for ~100mil board thickness
1
Through Hole (Vertically Mounted) SMA Connector on PCB - Feasible for GNSS Application?
2
RF - sma pth connector impedance matching to cpw