I've been trying to set up a microphone circuit for use in an AVR, essentially just to detect levels of noise. I observed some strange behavior in the amplified circuit I set up, so i elected to strip the circuit down to its base functional unit to see if I could figure out what the problem was. Schematic follows. 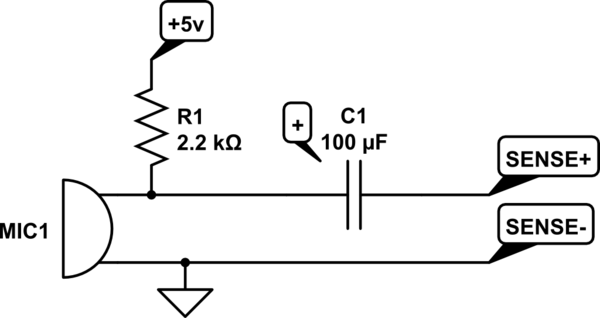 The resources that I've used to build this circuit all seem to indicate that the type of cap used doesn't matter, so I opted for the higher-capacitance electrolytic. This did not behave as expected.

The following is a waveform captured from the circuit using an electrolytic cap. 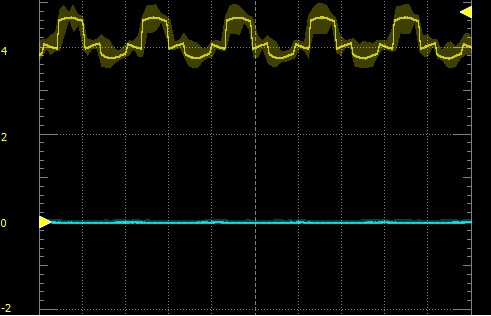 To be clear, these waveforms are captured while the room is quiet. blowing into the microphone produces a response.

The ceramic capacitors I have do not dampen the 60Hz noise to my liking, and it seems silly to wire a bunch of them in parallel when I have a few much larger electrolytic caps.

I've tried a few different sizes of electrolytic caps, with the same result.

I've tried reversing the polarity, with the same result.

Why am I seeing this discrepancy? How can I remedy the situation?

Additionally and secondarily, is there an established best practice for using a microphone with AVR?

EDIT turns out i'm seeing this effect because my cheap chinese power supply has a poor rectifier :^)

You should use a 100 kohm load resistor between +sense and -sense. Maybe even a 10 kohm would be better.

With just a basic open circuit, the electrolytic capacitor's leakage currents would place a DC voltage at the output and the signal would hit the end stops of the AVR ADC circuits.

Your problems appear on scope to be CM hum not distortion. But the Electrolytic has distortion from probably even more pickup on the signal.

Not the answer you're looking for? Browse other questions tagged capacitor microphone electrolytic-capacitor ceramic or ask your own question.