I found these circuit diagrams for VHF transceiver online, and am having trouble recognizing a number of the symbols. Would you please help me identify the boxed symbols?

Here's what I've got so far: 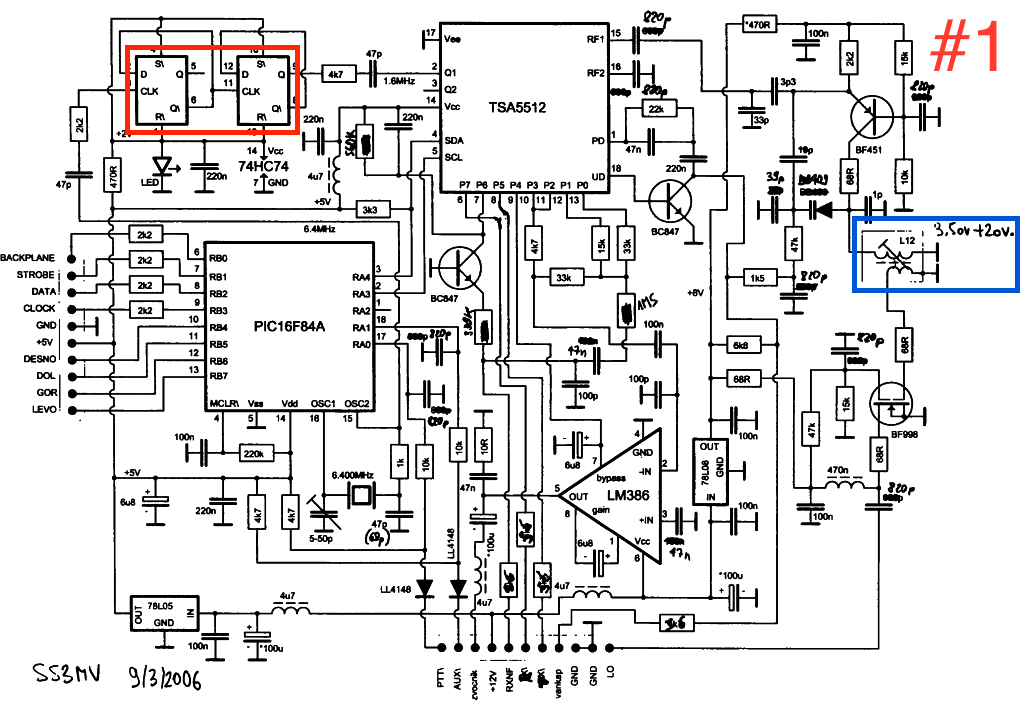 The red box with CLK should refer to clock, but I don't know which type or if it even matters. Completely clueless on the blue box with L12.

I think that the red boxes labeled CuAg and CuL are likely wire coils of copper/silver and enameled copper wire respectively. The blue box appears to be a transistor of some kind but I don't know which and googling the label (looks like 25k1904) has gotten me nowhere. The yellow boxes should be inductors with a ferrite core but I don't understand the VK200 labelling. The purple box I'm thinking is a trimming potentiometer? The brown boxes are diodes but not sure if the 12V is referring to a specific type or just that they are connected to the 12V GND. And the green box is a switch ('preklop' translates to 'switch' from Slovenian) but RX izhad and +VRX are throwing me off there.

The pink, red, yellow, and orange boxes look like relays, but I have no idea wha kind. The blue box is a straight up mystery as is the green.

Lastly, was going to use Amazon & a local RadioShack to track down most of the items, but if y'all have any sourcing tips for small electrical components, they are all welcome.

Thanks in advance for any and all help!

The two components in the red box are the two halves of a 74HC74 flip-flop. (The part number is a bit out of place, but is present -- look under the right half.)

The component in the blue box looks like some sort of adjustable inductor or transformer.

The component in the blue box is a MOSFET. Andrew Morton's interpretation of the part number as "2SK1904" looks plausible.

The component in the purple box is a 1MΩ potentiometer. (This diagram is using IEC resistor symbols, which look like a rectangle instead of a jagged line.)

The component in the green box, on the right, is a coaxial connector of some sort.

The component in the left brown box is using an uncommon symbol for a Zener diode; the "12V" marking is probably supposed to be its breakdown voltage. The brown box on the right is drawn as a normal diode -- this may be an error, given that it's also marked as "12V".

The symbols in red and yellow boxes all look like inductors of various sorts. The ones with T's across the middle are adjustable; the ones with a line next to them have a core. I'm not sure what "VK200" would mean either; it may be an abbreviation in another language.

Blue box is an inductor, connected to ground (the inverted T below it).

Red, yellow, orange, and purple boxes all look like adjustable inductors and transformers, similar to ones which appeared in previous images. I'm not sure what the significance of the box is supposed to be; it may mean that they should have metal cases.

Green box is two crystals. I can't quite read the text, but it probably indicates the frequency and cut.

This image should help with a lot of (what appear to be) variable/fixed inductors and ferrite cores: 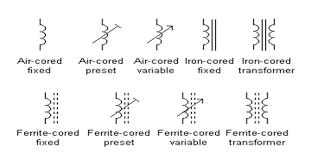 I'm hesistant to try and identify some of the symbols that I can't read clearly, but hopefully this gives you a starting point.

In drawing #3 the green box are not crystal but a ceramic filter. A crystal usually is indicated by one of those symbols and would have the frequency indicated. The boxes around the inductors are used as shielding. Those coils are used for tweaking up the circuit.

In Drawing #2 The purple box is 1 Megohm variable resistor.

In Drawing #1 The Flip-Flop

For the last one there I hope I remembered it correctly its been close to 35 years since I really messed with this stuff... :)

Not the answer you're looking for? Browse other questions tagged rf radio transceiver ham-radio vhf or ask your own question.

5
How to build cheap radio propagation beacon?
4
Duplexer for portable VHF repeater
10
Are there any open / unrestricted radio frequencies that are free for any use?
0
Fastest working Wireless communication method between two devices
1
Designing a 50Ω coplanar waveguide on 1.6mm FR4