In "Applications of Monolithic Bridge Drivers" from ST there's an application circuit for PWM control of a DC motor which uses an L293 and a TBA820M. Here it is: 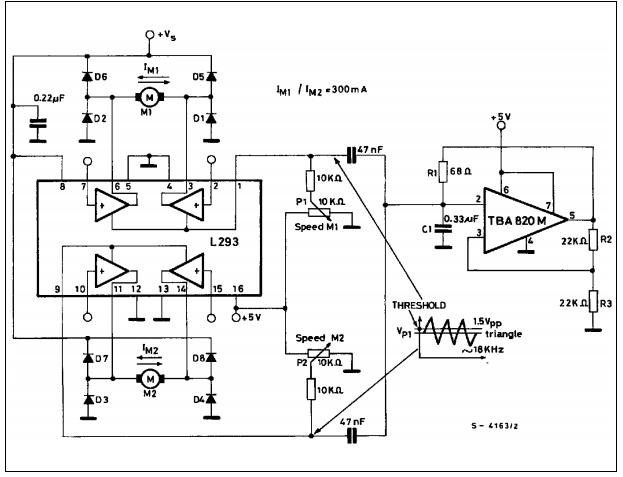 I know how the L293 works and I've read the 820M datasheet but I don't get the PWM signal part.

Why using an audio chip to get a triangle wave?

Short answer - Because you can.

Most of the time we don't want an audio amp to oscillate but they have a natural tendency to do so. The 'designer' probably had a few of these chips lying around and decided they would do the job.

Strictly speaking it doesn't produce a triangular wave but two exponentials as it charges and discharges the capacitor.

One possible advantage of the audio amp chip is its drive capacity so a low value resistor could be used to charge and discharge the capacitor. The 'triangular' signal is taken across the capacitor so a high impedance drive would be problematic.

How does this particular oscillator work?

Regardless of the pin names the 820 internal circuit shows pin 2 and 3 as effectively the inverting and non-inverting inputs but unlike the op amp the output is internally biased to half the supply (making Vp1 = 2.5) so that it can give maximum swing. This allows the 820 to use a single supply without additional offset resistors.

The output of the relaxation oscillator has two feedback loops. The resistors (R2 and R3) form a (switched) reference voltage at the 'non-inverting' input to compare the voltage across the capacitor at the other input.

What looks odd is that we don't use the normal output (squarewave) but take the signal from across the capacitor.

How are the DC offset and triangle signal added?

The two 47nF capacitors separate the triangle waveform from any DC they may have (2.5V). These are coupling capacitors.

The potentiometers, P2 and P1, are connected by 10k resistors to the other side of the 47nF capacitor plates. The DC level of the wipers is then added back to the triangular waveform.

Not the answer you're looking for? Browse other questions tagged pwm dc-motor oscillator h-bridge or ask your own question.

3
How to drive a high-side N-channel MOSFET with low VGS?
2
High Power H-Bridge with IR2125 Drivers Problem
2
Testing an h-bridge using the power supply and/or signal generator to control a DC motor
1
why do I need a pwm and H bridge, after a PID controller to feed a dc motor?
0
PWM signal is affected when motor is connected
0
Fan control using oscillator with varying capacitance
0
Interfacing with (Two) Full-Bridge PWM Motor Drivers to Control a Stepper Motor
0
Understanding PWM period and frequency calculation on dsPIC30F4013?
3
Using LED driver as PWM digital outputs
5
How to use motor drivers with H-bridge and PWM input, to control direction and speed of DC motors?