Here is a simple dickson inverter: 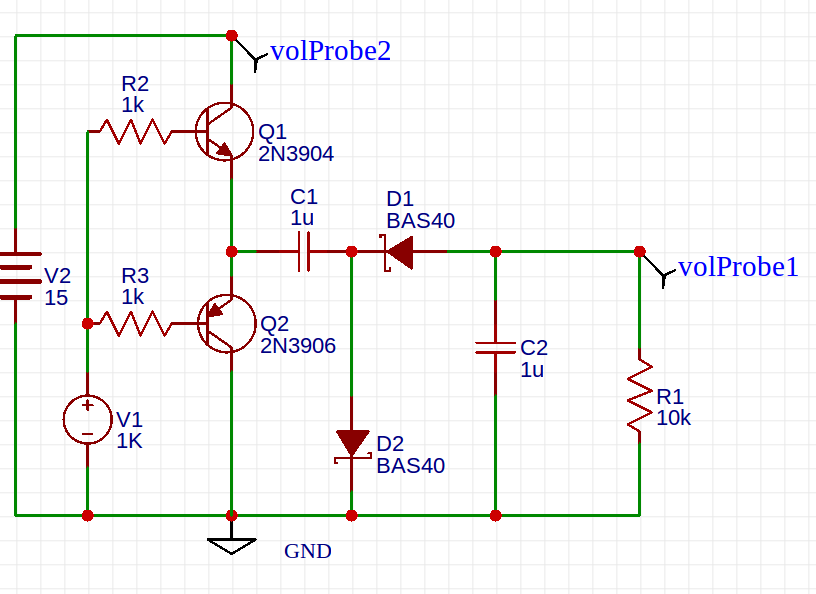 The simulation shows this: 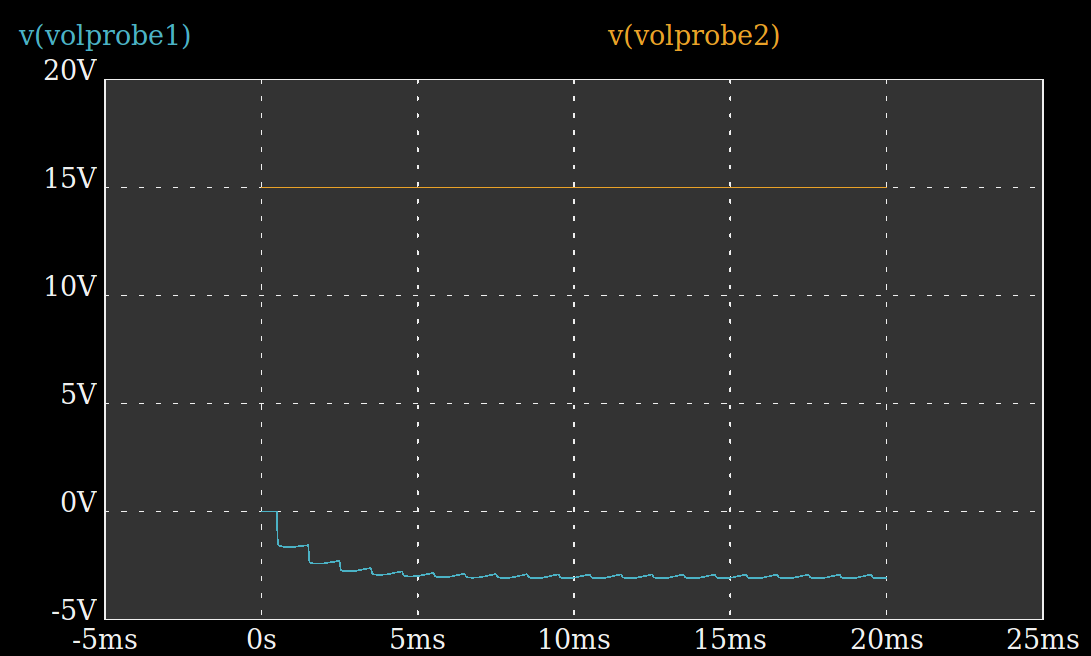 Is it a problem with the simulator? I don't see why the capactior was charged to the voltage of the square wave signal? Why is the push-pull pair not working?

UPDATE: I have replaced the push-pull pair with a single NPN transistor, as suggested. 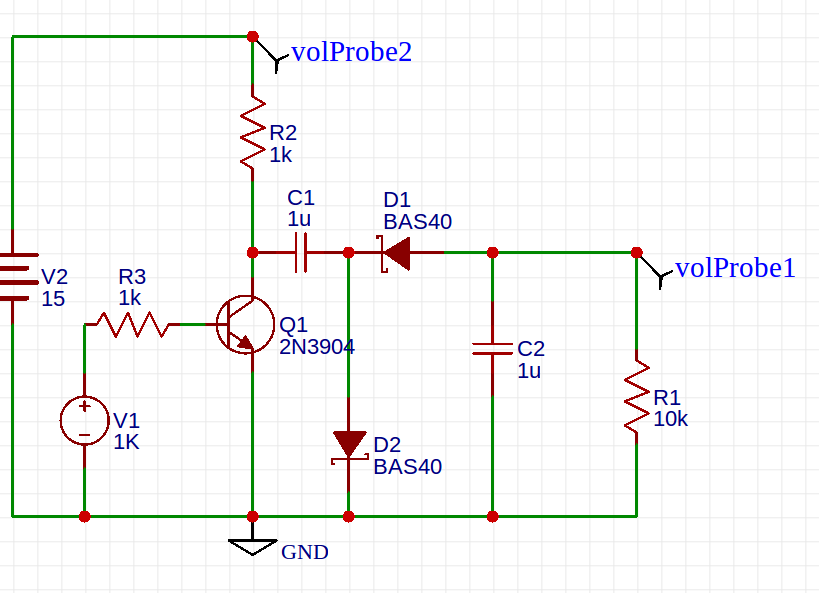 It works as expected, but the current is limited. 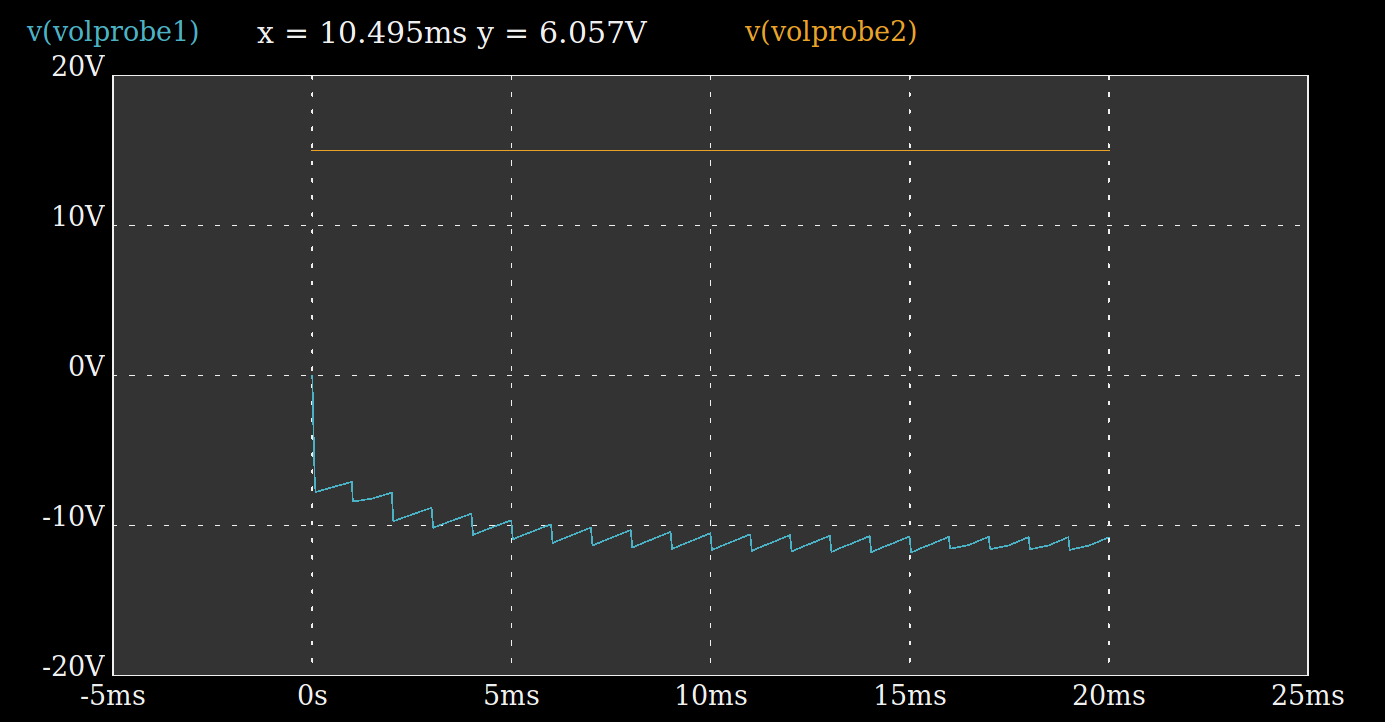 Is there a way to do this without a series resistor and single supply? (E.g. eliminate power disciplation on the resistor). 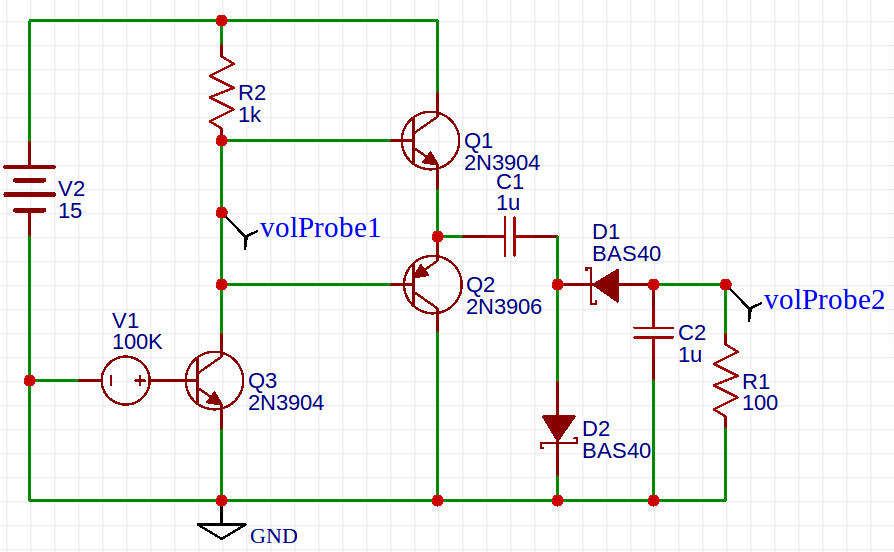 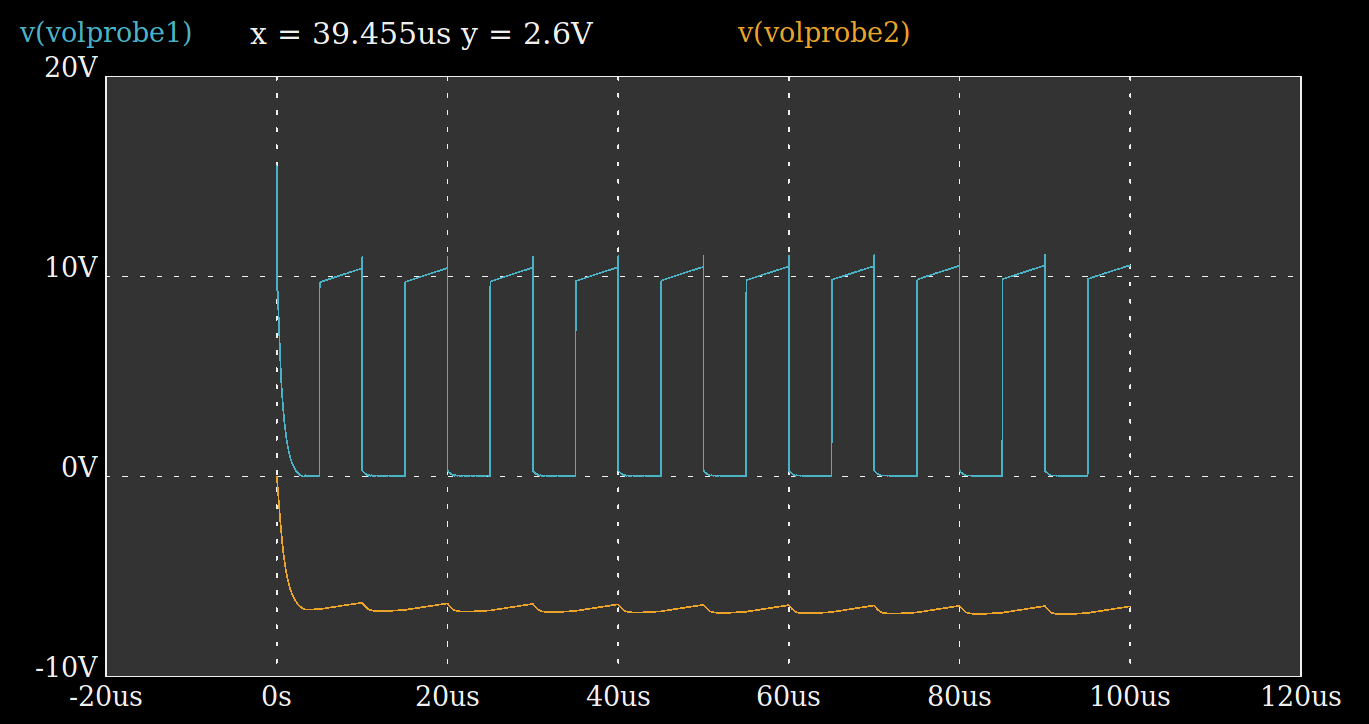 Frequency had to be increased because the load resistor was changed to 100 ohms. Now it can deliver about 150mA. Great!

V1 in your push pull circuit should be ranging from 0V to +15 volt (15 Vp-p) to properly drive the push-pull pair. These are configured as emitter followers and you are probably only driving them at the moment with a 5 Vp-p square wave hence you only see about -3 volts coming from the charge pump.

With just Q1 used, you have wired it as a common emitter and hence the collector voltage will drive nearly from 0 volts to +15 volts.

There are many factors that affect efficiency and Load Regulation in the Dickson Voltage Doubler, inverting or not.

Impedance ratios at fundamental frequency of the the square wave and highest harmonic are the primary factors.

This includes impedance of;

So how to choose the optimal parameters.

What not to do

So what is the Zout of the Doubler?

Due to all the losses dont' expect more than 10% efficiency and compare with commercial IC's. These are intended for low current because of charge transfer losses.

First, that's not a "inverter". It's a charge pump, which in this case is making a negative voltage.

The first circuit worked exactly as expected. The double emitter follower gives the signal more drive, but looses about 1.4 V of amplitude due to the B-E drops of the two transistors. The two Schottky diodes will eat up another 700 mV or so between them. If the voltage source is putting out a 0-5 V square wave, then 3 V output is about expected.

The basic idea of increasing the current capability with the double emitter follower is a good idea. However, if you want a larger negative output voltage, you have to give it a higher amplitude square wave as input.

Your second circuit creates a higher drive level because Q1 is used to amplify the signal voltage. However, the resulting output drive will be weaker due to the Q1 output having a higher impedance.

For the best result, combine the two. Keep the emitter followers of the first circuit, but drive them with the output of Q1 of the second circuit. Tie the two emitter follower bases together directly and to the output of the Q1 amplifier. That should give you -12 V or so, but with better drive.

For even better drive, use a higher frequency square wave. 1 kHz is very slow for a charge pump. I often run charges pumps from a spare clock output of a microcontroller that is 1 MHz or more.

Your push-pull buffer config is correct but V1 and V2 should have equal magnitudes.

As far as I can see, there seems to be a problem with the position of your PNP and NPN Transistors. Invert their positions, i.e. put the NPN one between the common point and ground; and the PNP between the common point and +15V point. Your circuit causes the transistors not to switch on completely. It may be the reason why the voltage at the output is not near the input square wave value. Inverting them will enable them to be completely on/off and increase the magnitude of the output voltage.

Also you will get less voltage than desired because of the diode forward voltage drop, although this difference will be around 0.5 V.

Please tell us of your results after the suggested change.

Update: After some comments and some simulating on my side, I would like to inform viewers that my solution is wrong and that the original PNP and NPN configuration is the correct one. Inverting them as suggested by me earlier does not make the circuit perform as it should.

19
Simple Circuit Simulation tutorial
0
Matrix and simulation
0
What is wrong with this PSpice simulation?
0
Keysight's Advanced Design System users, what's wrong with this simulation?
1
Basic N-MOSFET Circuit Simulation Results
2
VHDL - D flip flop simulation goes wrong
0
Can someone explain how frequency and inductance affects this pair of coupled inductors?
2
[Last Update]Simulating an RLC circuit with the 1N3880 in ngpice did not show any results or graph
0
Why base emitter voltage (Vbe) of BJT is not showing as 0.7v in proteus simulation?
2
Passive bandpass filter simulation gives wrong cutoff values