I have a UHF TV antenna for ISDB-T Digital TV reception. The transmitter just one only antenna is 70km away and some channels suffer from some "digital noise". That's it, the image is not perfect and some frames are lost.

The transmission line to the antenna is a standard 75 ohm coaxial cable. However, the antenna has a 300 Ohm impedance and I'm using a 4:1 balun to match the impedances.

Does changing the line to 300 ohm ribbon and putting the 4:1 balun right next to the digital TV receiver will enhance the reception?

In the ARRL Handbook 2010 section 20.4.4 ("Matching the Line to the Transmitter") there is a table showing that the most loss is having the balun right next to the antenna (like my setup).

EDIT: I'm also looking for some theory and some comments on a balun. Is there any 4:1 balun I can build that has a wide bandwidth on the 473-800 Mhz range?

All transmission lines suffer some loss, you will never get as much power out at the far end as what is put in at the source. This is true for both transmitters as well as receivers. For direct current (DC) the loss will be the resistive loss of the wire or other conductors used. At higher frequencies the resistive losses still occur, but other losses occur as well due to the dielectric loss which increases as the frequency increases and is generally much higher than the resistive loss.

In coax the dielectric is generally some sort of plastic located between the center conductor and the outside braid. 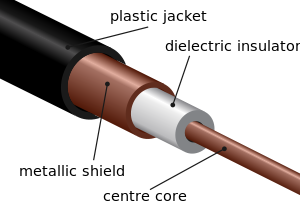 Balanced line may come in the form of twinlead,

With a balanced line the only reason to have anything at all between the two conductors is to maintain a uniform spacing and for this reason the less material the better. This is also true of coax, but much harder to implement in practice. Further there is generally a greater distance between conductors in all types of balanced lines than with coax.

Generally air makes a much better dielectric than any other substance when size is not an issue since free air does not degrade over time. It is the nature of the dielectric which primarily determines the signal losses at radio frequencies and as the ARRL handbook pointed out, losses for coax are higher than for balanced lines and the higher the frequency, the greater the advantage.

As a side note, the preceding assumes a perfectly matched line, in other words the source impedance = the load impedance = the characteristic impedance of the line. When there is any sort of a mismatch, a standing wave ratio (SWR) will be greater than unity and losses in coax will increase dramatically with an increase in SWR.

You are quite correct that the loss per foot for open wire line at these frequencies is far less than coax; if it is properly installed. This is a big if. The first thing I would check is the type of coax you are using. Is it some cheap, generic stuff from a place like Radio Shack or is it a premium quality product from a firm like Belden designed specifically for low loss at UHF frequencies? Your ARRL handbook lists loss for different types of coax.

Another thing to try is a mast mounted preamp at the antenna. It is better to boost the signal before the transmission line rather than after.

Getting back to how to best install open wire line, it should run straight in free air from the antenna to where it enters the building. Taping it to a metal mast, bending around corners, running it through walls etc. will all cause it to perform in a far from ideal manner. Coax suffers far less from such treatment.

I think the ARRL guideline is not so much to have the balun at the "far end" but rather to minimize losses at the frequency you're working at. Take a look at the cable loss per foot for 300 ohm twinlead vs quad-shield 75 ohm coax at the frequency your weak station is at. You might be surprised.

In the end, you want the balun placed where it makes sense. If your antenna impedance is 300 ohms and the cable from the antenna to the ground is 75 ohms, then you must put your balun at the antenna, because it needs to match the impedance of the antenna to that of the transmission line. If you were using standard 300 ohm twinlead, then you would place your balun at the TV, where it is expecting 75 ohms and the 300 ohm twinlead is the mismatch. Either way, you want to make sure your low noise amplifier is as electrically close to the antenna as possible; Most amplifiers are 75 ohm, so you'll have to have a balun between the antenna and amplifier, so use excellent quality cable and rigid, weatherproof mounting techniques. You're trying to pick up super weak stations and every connector, device and kink in the cable ends up weakening the already weak signal you want. The quality and length of the cable AFTER the LNA is less important than the connections from the antenna to the LNA, but you really do want to take your time and spend the money on top-notch kit for those first 6-12 inches.

Don't be afraid to try other baluns; I have seen a huge difference in quality between different baluns, and cost is NOT an indicator of performance. The standard "PCB trace shorted stub" baluns that are part of most antennas you can buy today are total garbage. The old torroidal baluns found on the back of 25 year old televisions are better! I've generally found that the baluns that actually use transformers in them are the best, but that is a pretty broad statement to make without qualifying it, so do your own experimentation. :-) The good news is that baluns are cheap. Try a few different ones. Climbing the tower is a pain, but without devising an entire test system and trying them on the ground that's probably the quickest way to solve your problem.

Building coax loop baluns is pretty easy. Before the digital switchover in Canada I was pulling in all of the stations from Toronto's CN Tower with a homemade balun and a good quality LNA. I'm about 80 miles away (as the crow flies). With the balun provided with the antenna I could only pick up CBC. With a cheap $2 Home Depot balun I could get pretty much everything, and with my own balun I got everything in solidly. I tuned my coax loop balun to have the best impedance match at the frequency of the weakest station. The 4:1 voltage loop coax loop balun I built can be seen here: http://www.digitalhome.ca/forum/showpost.php?p=992185&postcount=502. The entire thread is an excellent read, as are most of the threads in the antenna design part of that site.