I have a 5 Vpp max audio signal in my circuit which I obtain from earlier stages of processing. I would like to deliver the signal to a 20W 4 ohms speaker. But since an OPAMP circuit generates the signal, it won't be able to supply enough current. How can I use transistors to amplify the current delivered? I don't think I need a common emitter voltage amplifier since the voltage is already large. What amplifier topology should I use? What kind of transistors do I need for the purpose?

I'm trying to refrain from using specific ICs and use transistors instead, and I don't need a very complicated adjustable amplifier, my only goal is be able to listen to the contents of the signal. The 20 W speaker is necessary for my application, a weaker speaker will not do. I already have a 12 V and 30 V power supply used in the previous stages.

For fairly straightforward amplifiers, this means having a total power supply voltage that exceeds 25.3 volts so maybe a +/- 15 volt power rail is worth considering. This leaves a little bit of headroom because most op-amps on +/-15 volt rails will probably only be able to swing to +/- 13 volts (26 Vp-p) and, with a push-pull emitter follower stage you should be able to achieve about 1 volt lower (under load) with a little bit of care.

However, if you are talking about music reproduction then it's a different story. Music tends to have a "crest factor" that makes delivering 20 watts a bigger problem. Compare a sine wave and music: -

For the same peak power delivered (2 watts) a sine wave would be delivering 1 watt (average) whilst music would deliver significantly less at below 0.1 watts.

So, you have to decide what you are talking about when you say 20 watts.

Anyway, the circuit is the same but the power rails are different so, toplogically, if you don't want to use a ready-made chip solution then consider adding an NPN and PNP transistor to an op-amp like this: - 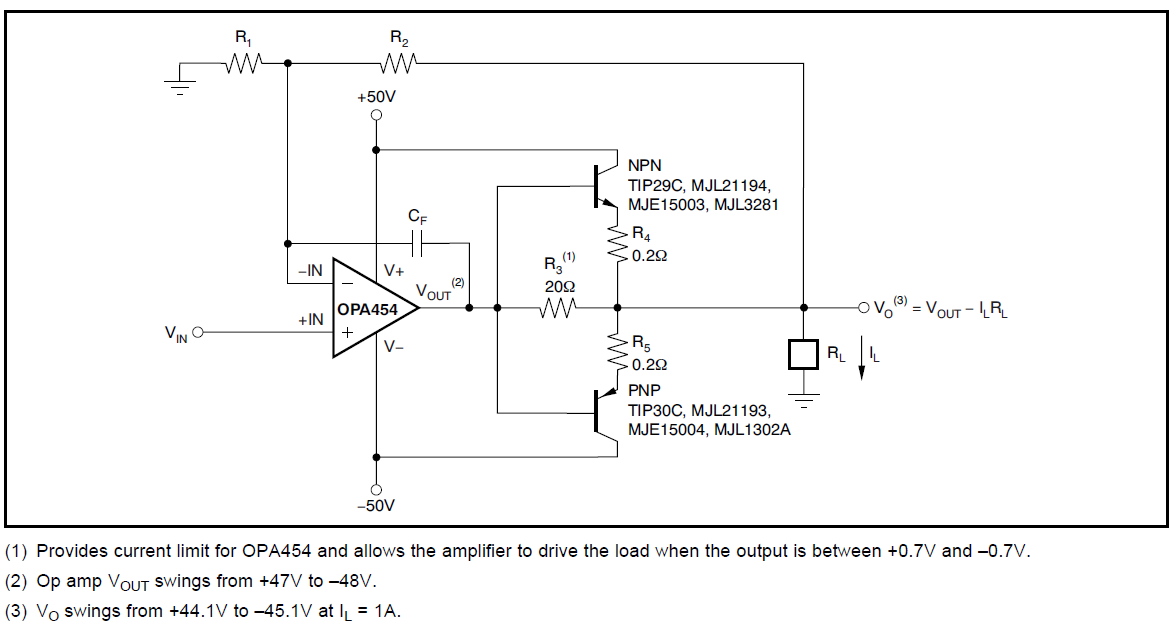 The diagram above was taken from the DS of the OPA454.

It shows power supplies of +/- 50 volts but these could be more like +/- 16 volts for just delivering a sine wave of 20 watts to 4 ohms. I don't think it's useful to go into further details until you decide what you want (20 watt sine or 20 watt music).