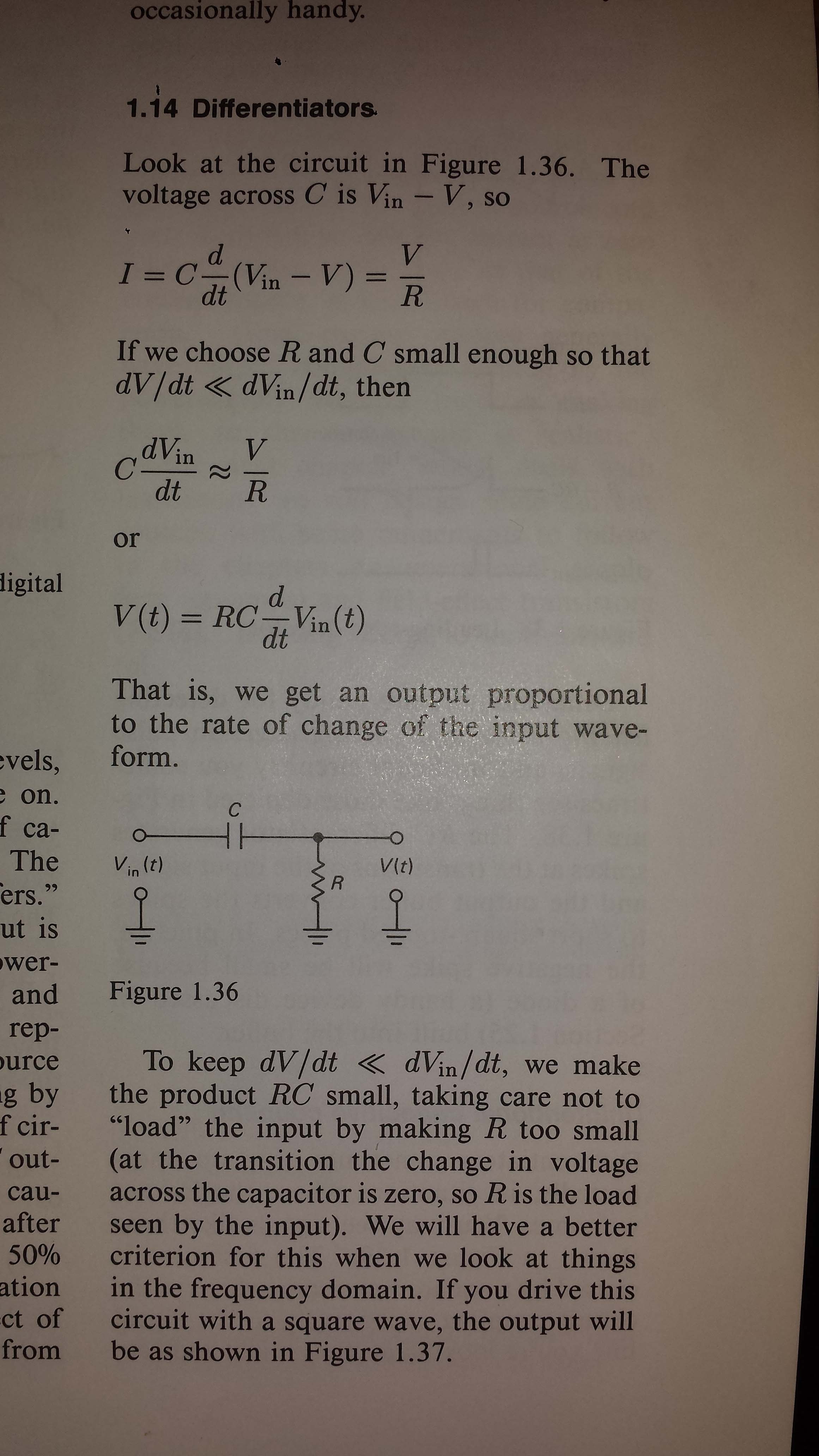 In the above image, take note of the line

dV/dt being much less than dVin/dt as a condition. I once asked a question about Integrators. I understand both the above image and my earlier question on integrators well enough (I think). 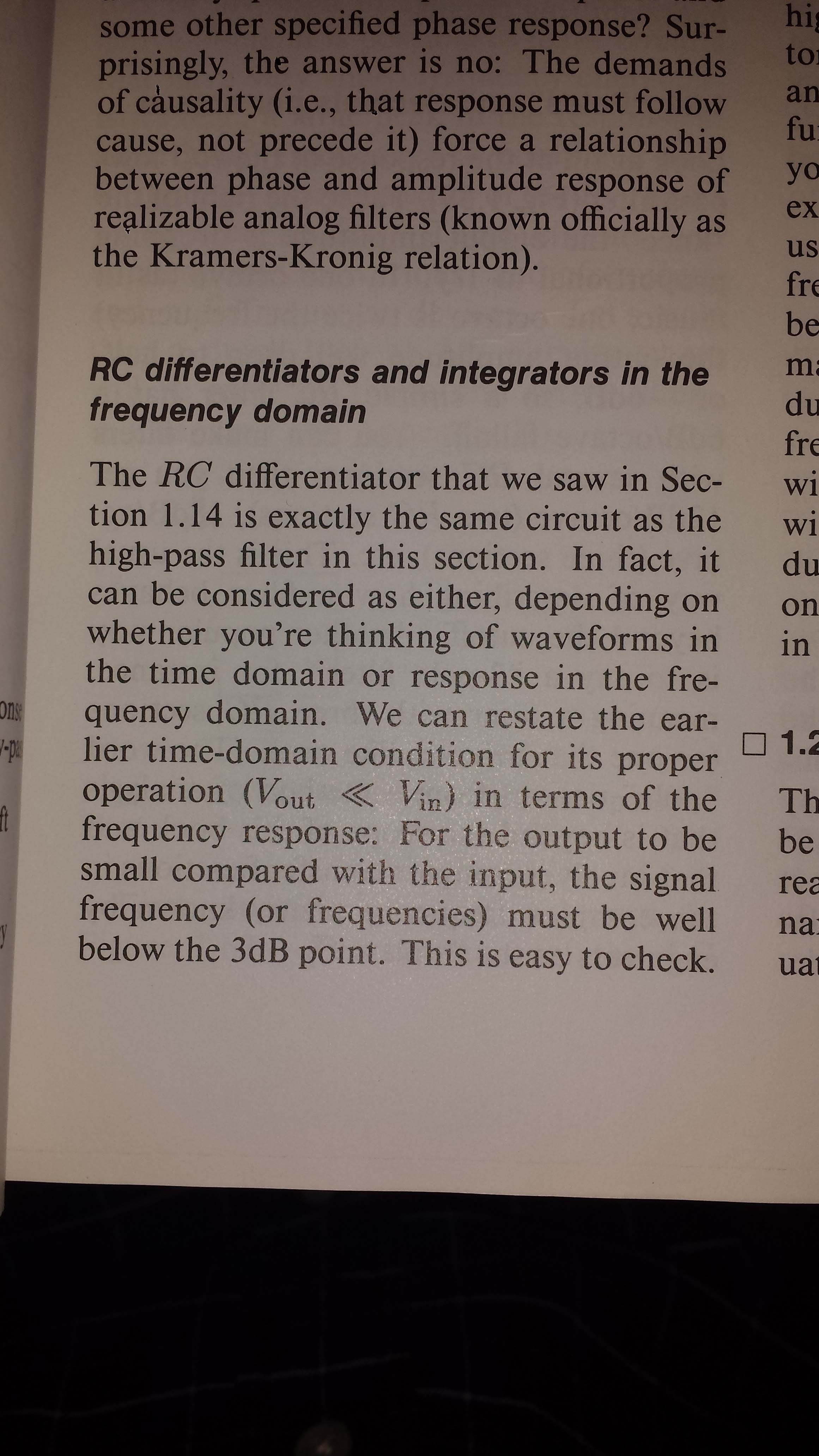 A later section of the book in the frequency domain (above) references image 1.14 when it says "we can restate the earlier time domain condition for its proper operation (Vout being much less than Vin). I understand what follows when it mentions the 3dB point. My question specifically relates to finding the condition ....

Vout being much less than Vin

Can someone point out where the book finds the required conditon Vout being much less than Vin in section 1.14? I suppose that if the condition on their derivatives...dV/dt being much less than dVin/dt is met then necessarily, Vout being much less than Vin is also met, though in a differentiator, Vout can go negative while Vin remains positive. (high to low transition). Is this statement referencing magnitudes? Basically, I am trying to find how the above line on the condition for a high pass filter, which basically is an RC differentiator, is referenced in section 1.14. I am not able to find the exact wording or convert the meanings/statements properly. Can one necessarily state that a relation on the derivatives of V and Vin transfers to their functions?Thanks.

" I understand what follows when it mentions the 3dB point. My question specifically relates to finding the condition ....Vout being much less than Vin"

The simple C-R highpass in Fig. 1.36 is NOT a differentiator. However, it can approximate a differentiating block (with a nearly constant phase shift of 90 deg) for frequencies much lower than the 3dB frequency of the highpass. For this frequency range, the magnitude of the capacitive impedance is much larger than the value of the resistor. For this reason we can say: The shown circuit works (nearly) as a differentiator for frequenciues with Vout much smaller than Vin.

Can someone point out where the book finds the required conditon Vout being much less than Vin in section 1.14?

is approximately equal to

hence yielding the equation given in section 1.14 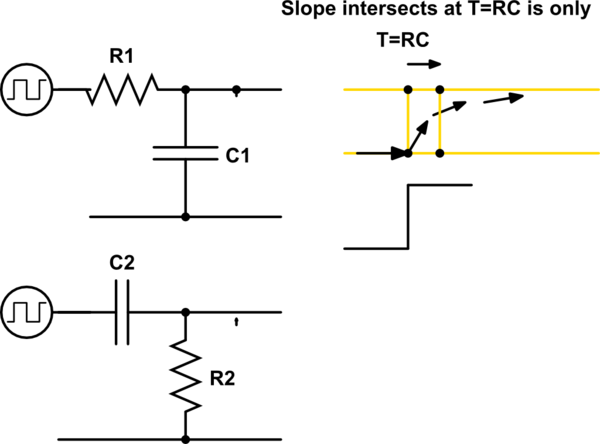 A true voltage integrator assumes current is constant. but for small voltage changes like the 1st <30% of full scale this simple passive integrator is fairly linear.

Can you guess what the differentiator signal looks like?

Here are 3 circuits that have the same total |Impedance| with a sine wave, but not with a square wave at same frequency due to impedance changes with harmonics.

For Integrate and differentiation, the goal with a simple passive circruit is to choose RC such that your output swing is 10 to 30% of full scale input to ensure reasonable linearity.

True integrator or differentiator circuits use constant current converter Op Amps to perform this task with linearity over the whole range. 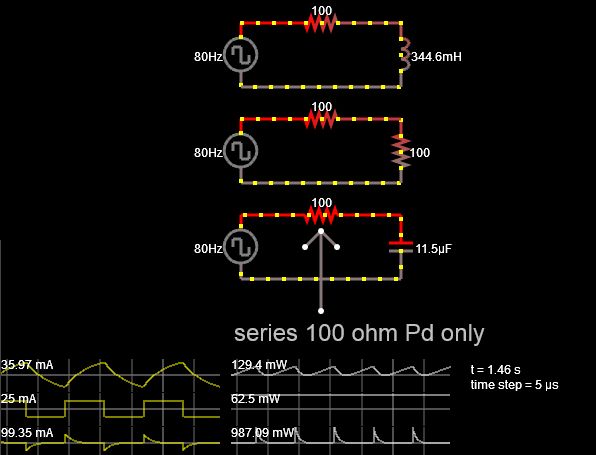 Not the answer you're looking for? Browse other questions tagged filter differential math or ask your own question.