How did wireless telegraphy reach so far?

Even as far back as the early 1900s, telegrams transmitted wirelessly could reach hundreds of miles. For instance, the Titanic communicated with Canada, 400 miles away, with relatively low-powered equipment. Given that telegraphs are very simple, how could these pulses have traveled so far?

the Titanic communicated with Canada, 400 miles away, with relatively low-powered equipment

The Titanic's "wireless" equipment was the most powerful in use at the time. The main transmitter was a rotary spark design, powered by a 5 kW motor alternator, fed from the ship's lighting circuit.

The equipment operated into a 4 wire antenna suspended between the ship's 2 masts, some 250 feet above the sea. There was also a battery powered emergency transmitter.

The main transmitter was housed in a special room, known as the "Silent Room". This room was located next door to the operating room, and specially insulated to reduce interference to the main receiver.

The equipment's guaranteed working range was 250 miles, but communications could be maintained for up to 400 miles during daylight and up to 2000 miles at night. 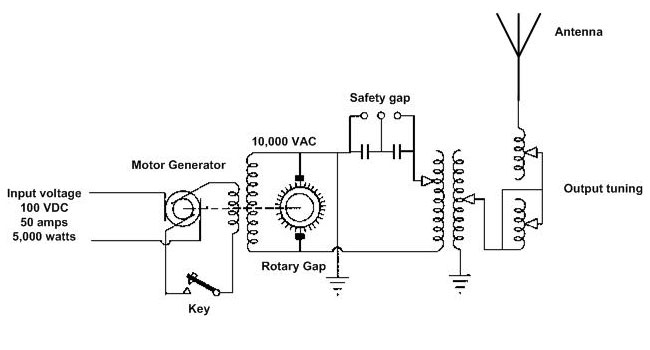 So, if you class 5 kW as low power then that's OK but things have moved on since then. For instance, as tubes/valves were developed radio receivers became more sensitive and this means that transmit powers could reduce considerably.

You have to realize that these transmissions are actual electromagnetic waves and they attenuate only very gradually with distance. For instance, comparing against a contactless battery charger, its magnetic field reduces with distance cubed beyond about the diameter of the coils whereas, the H field in a proper EM transmission reduces linearly with distance.

Just consider the Voyager 1 probe and its transmissions from beyond Pluto. The transmitter power is only 20 watts but the biggest thing on it was the parabolic dish: - 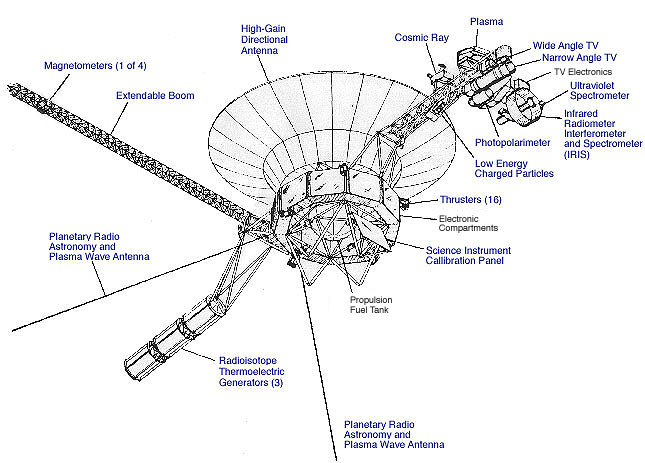 And doesn't this mean that there couldn't have been very many people using the systems, since operators within hundreds of miles would all be jamming the airwaves? It seems this would produce a lot of cross-talk.

This was indeed a big problem and there was a famous transmission from RMS Titanic that suggested that SS Californian should "shut-up" because it was blocking a transmission from Cape race on the Canada coast: -

Titanic's on-duty wireless operator, Jack Phillips, was busy clearing a backlog of passengers' messages with the wireless station at Cape Race, Newfoundland, 800 miles (1,300 km) away, at the time. Evans' message that SS Californian was stopped and surrounded by ice, due to the relative proximity of the two ships, drowned out a separate message Phillips had been in the process of receiving from Cape Race, and he rebuked Evans: "Shut up, shut up! I am busy; I am working Cape Race!" Evans listened for a little while longer, and at 23:35 he turned off the wireless and went to bed. Five minutes later, Titanic hit an iceberg. Twenty-five minutes after that, she transmitted her first distress call.

Quote taken from here, the Wiki page for the steamship Californian.

The Titanic's "wireless" equipment was the most powerful in use at the time. The main transmitter was a rotary spark design, powered by a 5 kW motor alternator, fed from the ship's lighting circuit

Even as far back as the early 1900s, telegrams transmitted wirelessly could reach hundreds of miles. For instance, the Titanic communicated with Canada, 400 miles away, with relatively low-powered equipment. Given that telegraphs are very simple, how could these pulses travel so far?

Besides the fact, as others have pointed out, that the power really wasn't very low, morse is simply a very low-bandwidth signal. You can get a message across using very small amounts of received power, as long as you don't want to send very much information in a given period of time. WiFi carries a billion bits per second from one room to another. A TV channel sends tens of millions of bits per second over maybe a hundred mile radius. Morse code keyed by hand is equivalent to about ten bits per second, give or take a factor of two, and in bad conditions it could be less.

Sure. And if you assume the same transmitter but a modern receiver, you could probably receive the signal over a considerably longer distance, because a good modern receiver has higher sensitivity, cleaner amplification, and the aid of computer algorithms.

Some of both. There were plenty of frequencies available for multiple stations even back in the 1910s, and if you look at modern usage you'll see that Morse code allows for very narrow channel spacing, with potentially hundreds of conversations going on in parallel in the space of a few Megahertz. But the equipment in use at the time had poor frequency stability and very bad wideband noise, and couldn't just change channels at the drop of a hat, so in reality there were few channels in use, and there were issues with interference. Nonetheless there were quite a few ships and shore stations making regular contact as early as 1910.

Given that telegraphs are very simple, how could these pulses travel so far?

By using sufficient power and containing frequencies that supported a propagation that could go around the earth's curvature that distance.

Yes. It is known as HF (high frequency) radio. For over the ocean flights, commercial aircraft require some sort of reporting. If they don't have satellite communication, they need to communicate with HF radio (that also extend into the MF bands). HF radio coms need to be attempted with a list of frequencies (based on the distance, time of day, and propagation reports).

Radio waves propagate via line of sight, ground wave, and sky wave. Newfoundland wasn't any where near line of sight. Ground waves can propagate around the earths curvature. A distance of 400 miles would require a very low frequency (and low data rate). Sky waves can refract off of the ionosphere and back down to earth around the curve. Sometimes reflecting off of the earth, back up the ionosphere and refract again (called "skip").

Over ocean flights have traditionally used the skywave refraction when beyond line of sight. It is not entirely reliable, and position reports are sometimes delayed in order wait for the distance to change.

One way of decreasing noise power is collecting the signal over a longer time period and averaging out the noise using filters or signal redundancies such as parity bits in digital signals. So there is a trade off between data rate and SNR-- you can reduce your data rate to increase your SNR.

Although the detector of the telegraph signal (the listener's ear) is an analog system, the listener's ear/brain effectively "averages" each dash and dot over the duration of the tone, leading to an increase in SNR. Given that a telegraph operator is likely highly skilled at identifying noisy signals, their detection capability will be quite good.

As well, the redundancy of human languages provides another error-correction mechanism. Think about how effortlessly you automatically correct typos in your brain without requiring confirmation from the message sender. (Example: "This szentence h4s a lt of errors.")

Given that 5 kW is a relatively high transmit power for a mobile transmitter (your cell phone is roughly 1 W), and given the redundancies present in the signal itself, it is certainly plausible that communication took place at these ranges.

Not the answer you're looking for? Browse other questions tagged wireless telecommunications or ask your own question.

7
Long range (~15 km) low baud-rate wireless communication in a mountain environment (no LOS)
1
What frequency did wireless telegraphs operate at?