I'm not an engineer or auto mechanic, but I know what a diode is, and I know I need one for my application.

A little background (forgive me). I own a driving school, with a fleet of Toyota Corollas. Like many modern cars, these are equipped with a "lane change turn signal feature"... That is, if you move the signal switch only part-way, it will continue to blink 3 times after you release it. This confuses the heck out of our students, who attempt to cancel a signal but if they move it a little too far they see it still blinking, try to move it the other way, then the other way, etc. I dislike the feature myself as it's never proper to blink only 3 times. So, I'd like to disable the feature.

To figure things out, I bought a used turn signal switch matching this model and put it on my multi-meter. So I know which pins are connected as the switch arm is moved. As shown in my graphic, the car sees a connection to GROUND when the switch is moved either left or right, BEFORE it "clicks in". Then when it "clicks into position", it sees another connection... just one wire representing both sides. When the turn signal is turned off after this wire shows a closed circuit, it does NOT keep blinking.

So I'd like the switch to "lie" to the car, telling it that it's "fully clicked" whenever it's moved at all. I don't want to tear the switch apart or even remove it since it's inside the steering column, but the cable is easy to access. It seems I need to add two diodes, shown below in brown.

I've got room to put pretty much any diode between spliced wires, but the only diodes I've worked with are tiny ones on circuit boards.

Any suggestions for where I can find a diode and be reasonably confident it will work? I know almost nothing about diode specs. (Or is my theory completely flawed somehow?)

FakeMoustache actually should get credit for answering my question, but he posted it as a comment and an answer should be posted here.

Notice the black wire doesn't necessarily have to be cut, but I find it easier than stripping and splicing mid-wire.

Also notice there are two pink wires. Don't splice into the wrong one! See the illustration. 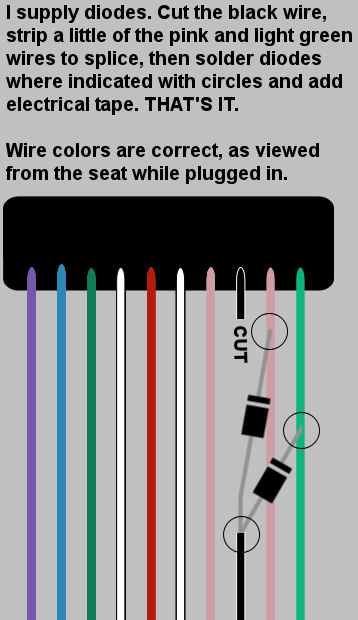 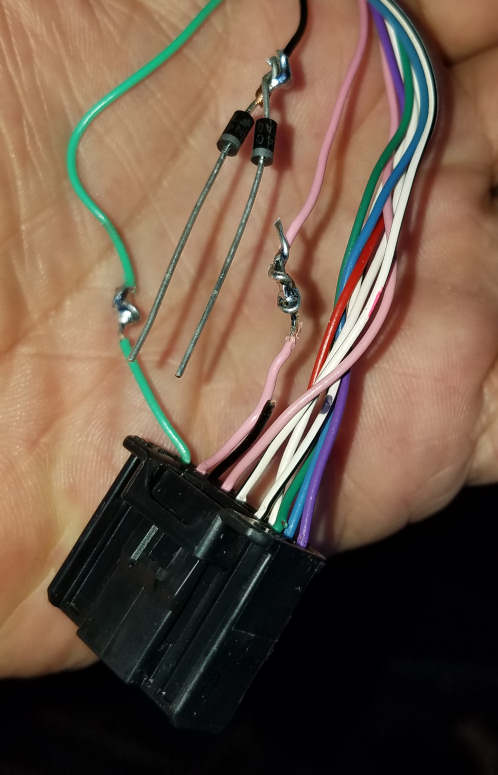 Since the connections are very likely inputs to a MCU, they should carry minimal current. I would estimate in the order of ma, so any 1 amp, 24v diode (or better) should work - electrically. However, adding the diodes as shown, you will be reducing the time delay between the "direction" and "latch" signals, so the MCU might get "confused." So, it should work, but it is not guarantied that it will always work.

Not the answer you're looking for? Browse other questions tagged diodes automotive or ask your own question.

1
How do I select the Correct Diodes and Resistors for my LEDs?
3
calculating resistance for LED strips to use as parking lamps and turn signals
1
Which diodes for 12v indicator light circuit?
1
A simple pulse generator
1
Need assistance in choosing diode for seat heater circuit
2
Turn on 12v car amplifier with ATX POWER_GOOD?
1
Can I add flyback diodes to my car window motors?
0
Swap between two colors without an additional light?
0
Why does my transistor get hot?