I got a cheap RCWL-0516 microwave doppler radar proximity sensor module to evaluate. The RF part of this has surprisingly few components (what looks like a MMBR941M NPN and a hand full of passives)... but I think more important is the microwave magic PCB design. There is very little hard information available for this (eg even the operating frequency is left unstated.. I found mine at 3.181GHz!). My aim is to try to document the workings of this module as much as possible. I'm making my research available on GitHub (link below).

Unfortunately microwave is voodoo magic to me. I wonder can anyone with microwave design expertise have a quick look over my research to date and provide me with pointers for further research?

The GitHub repository is here: https://github.com/jdesbonnet/RCWL-0516 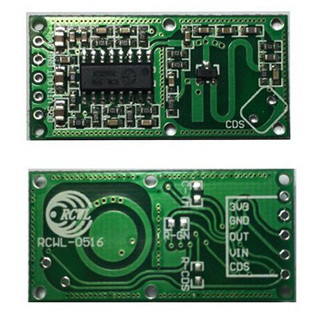 There is also a datasheet for this module, unfortunately for the non-Chinese, it is in Chinese language.

R-CDS (parallel to R15) is part of the voltage divider for the photo resistor (LDR). When it's bright, the LDR pulls the CDS line below 0.7V, disabling the trigger output (pin 9, VC). Thus, the brightness sensitivity can be adjusted with R-CDS. Populating R-CDS means enabling the trigger at brighter environment; the lower R-CDS, the brighter it has to be to disable the trigger. CDS can also pulled low from the pin header to disable triggering.

C-TM (in parallel to C2=10nF) is connected to pin 4, RC1, and seems to increase the trigger pulse width (might be a more clear wording than "repeat trigger time"). Haven't tried any of those though.

Here is a cleaned up schematic of this board: https://www.tayloredge.com/reference/Electronics/RF/0242.pdf

I also bought such a module after seeing it for sale on ebay. Since I work on radar it triggered my interest.

You mention: However something is puzzling me: when I wave my hand in front of the sensor the frequency shifts by up to 1 MHz.

I was thinking that this would be caused by the (Doppler effect of the) reflecting waves from your hand but that is not true.

I did some calculations here.

vr: The velocity of the receiver relative to the medium, positive if the receiver is moving towards the source, here the speed of your hand, for example 1 m/s

vs: The velocity of the source relative to the medium, positive if the source is moving away from the receiver, here the speed of the radar module = 0 m/s

fs: Emitted Frequency, here the frequency at which the module is transmitting 3 GHz so 3*10^9 Hz

f: Received Frequency that is the frequency shift of the wave reflected back from your moving hand, the calculation shows that it is 2.999 999 99 GHz so in this case 10 Hz

So the Doppler effect gives a much lower frequency change than the 1 MHz you have seen.

I now think that the presence of your hand is causing the oscillator to (capacitively) couple to your hand and that this makes it operate at a slightly different frequency.

You can check this, see if the frequency change also occurs if you keep your hand still in the detection beam. I think you will then also see the frequency shift.

The module operates by mixing the reflected wave with the transmitted wave. Mixing will generate a signal consisting of the sum and difference frequencies of the input signals. So in the Doppler calculation that is the 10 Hz difference.

I expect that the RCWL-9196 chip detects signals in this frequency range and triggers the output when it does.

I think that from a microwave perspective this is not "rocket science" nor "Voodoo" ;-) In my view it is just a clever combination of known solutions (the oscillator and the antenna) by combining them in such a way that this can be used as a movement detector.

The large frequency shift from a none moving hand is not part of the detection, just a consequence of a free-running oscillator. The patch antenna is strongly coupled to the transistor and are part of the resonant structure that set the oscillator frequency. The Doppler shift is much smaller, as noted above, low frequency audio for the fastest likely moving target. If the centre frequency moves a few percent, the effect on the Doppler is similar, a frequency change of just a few percent. Unless the centre frequency changes so fast compared to the time it takes the signal to get out from transmitter and back again to be mixed with the slightly changed frequency being transmitted, the change in centre frequency will not produce anything looking like a detection.
The transistor is acting both as oscillator and mixer/detector, as the return signal slightly perturbs the DC level on the transistor. As a side effect, varactor-like, that DC change will detune it.

Not the answer you're looking for? Browse other questions tagged proximity-sensor microwave radar or ask your own question.

12
How to make IR proximity detector immune to the daylight?
0
Reverse iBeacon and Proximity Sensor
0
How does a microwave oven-leakage detector work?
0
Help with reverse engineering a small PCB