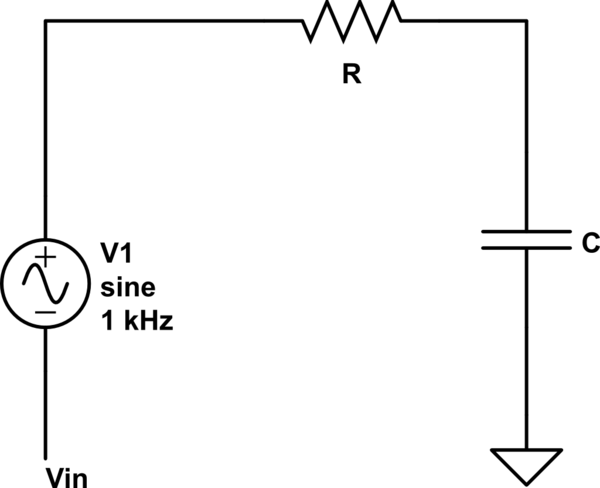 In the follwoing two images, I am having a problem seeing the confusion the author is talking about and more importantly how he uses the phasor diagram in figure 1.61 to clear this confusion up? He describes the confusion the reader is likely to see in the second image.

But first, Note the last line in the first image, "Lets take an example, namely the fact that.."

In the second image, he states that if you change the capacitor to a resistor equal to R, you get 6db attenuation. R / (R + R) = 50%. I see that, simple voltage divider.

Questions: 1) How does figure 1.61 show this clearly? I don't see its explanation.

2) In the text of the second image, the author says the input voltage (applied across the series RC pair) is proportional to the hypotnuse. Why is this so, the input is from en external source Vin (wall outlet)?

3) He then says that the output voltage (across R only) is proportional to the length of the R leg of the triangle. Again, I'm not seeing how the phasor diagram explains all this.

Thanks for the great help. I've never been this far in this book as yet and think the other chapters are home free. :) 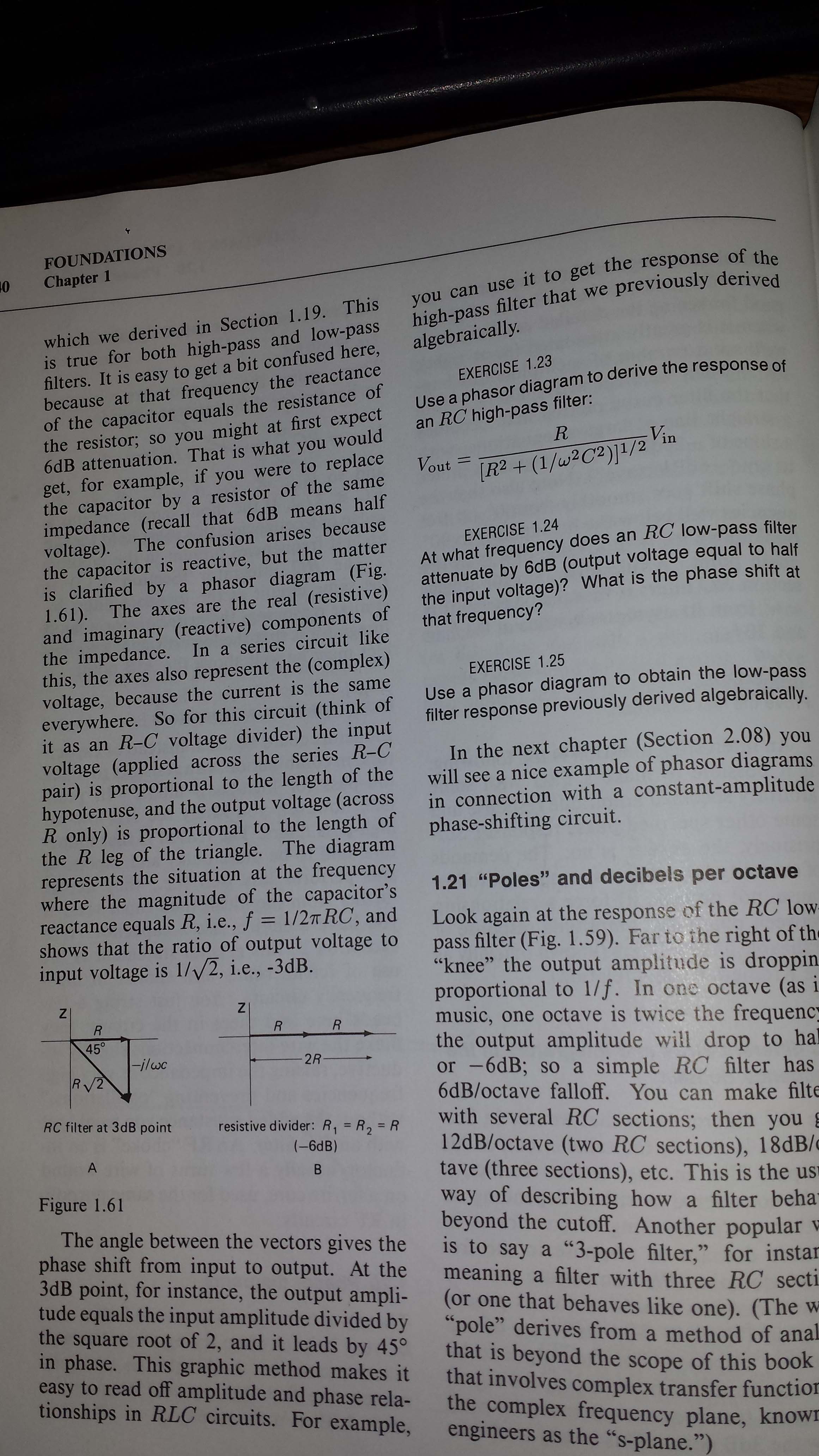 This is because db does account for phase, db is a magnitude.

for this circuit in phasor notation:

at the corner frequency:

To relate it to the resistor divider circuit, if you were to separate the equation to its real and imaginary components you would get this:

Separate out the Real (in phase power):

That figure is confusing. I'm pretty sure they are just trying to show this circuit is seperated into real and imaginary components.

Phasor notation is basically taking the fourier transform of the circuit. Everything is written in terms of a completely continuous sinusoidal input, no DC component whatsoever. Once you do this reactive components (capacitors/inductors) can be treated like having resistors with a reactive impedence. So for capacitor: i=C(dv/dt) time domain ==> I=jwCV fourier transform

When you convert to phasor notation vin,vout or what ever voltage no longer means the same thing.

So Example 1.23 is not always true if Vout is a time domain voltage and is never true if Vin is not completely sinusoidal.

Impedance is the complex sum of Resistance and Reactance.

This is because the relationship between voltage and current gets phase shifted in time the more reactance you add to a circuit, such as your basic filter.

Pure capacitors shift the voltage with respect to current by -90 degrees or in other words 1/4 of a cycle delayed or 'lagged'. Thats where the -j comes into it and now we have to use the maths of complex numbers to add real and imaginary components.

Pure inductors shift the voltage with respect to current by +90 degrees or 1/4 of a cycle ahead or 'leading'.

The 3dB/6dB thing is a red herring and only comes out of the maths when comparing magnitudes. Actually the -3dB point is called the 'critical' frequency where the reactance in ohms is equal to the resistance in ohms.

Switching R and C will not make difference. changing the supply to current source can be done when using phasors. You will get the same answer if the current magnitude is scaled such that the power to circuit is the same and you will have to invert the phase angle when converting back to voltage.

It is unnecessary to do this. All you need to do it solve this problem is put '-j/(wC)' as the impedance for C and solve it like a normal voltage divider. That Z plot is confusing and not useful. No body solves like that unless they doing it as an exercise.

If vin is a cosine with no phase angle and magnitude V then:

^^^^^^ this is basis of phasor notation. You make the input to the system totally sinusoidal then use a simplified eulers formula to write the sinusoids as phasors.

Pretty much everybodys does not write the 'Re' portion.

So this shows that vout has magnitude of V/sqrt(2) and is 45deg out of phase.

Not the answer you're looking for? Browse other questions tagged circuit-analysis math phasor or ask your own question.

5
How to apporach this phasors exam question with gernator parameters and currents given?
4
Understanding The Art of Electronics mathematical explanation for capacitors
1
Common gate with low input impedance
0
Art Of Electronics - RC Differenciator Circuits and High Pass Filters
0
Confusion with interpreting leading and lagging concepts for given electrical quantities
0
The Art of Electronics (Integrators)
1
Finding current through a diode
0
How to work out this implementation of chua's diode?
0
Equivalent circuit and substitution