Create Circuit to come ON when momentary contact is RELEASED, not pushed

A friend of mine at work seemed to think this would be a good application for a 556 timer chip, which I gather has two 555 timer circuits in it, which are somehow linked, and the output of one of them controls the start of the second timer. I'm not exactly sure how you would apply that to my project, but I suppose it makes sense, the first button would trigger the timer circuit, for as long as button #1 is pressed, and then AFTER that button press, trigger the second timer, which would go on forever until a signal from Switch #2.

I assembled and created this circuit. I don't currently have a switch that does what #2 does, but with a jumper wire, I can simulate it. It doesn't work. :(

My friend from work seems to think it was in my description - But I re-read the description and it's pretty straight forward.

Doesn't SOUND that complicated to me, although I wasn't able to figure out a way to make it work. In my mind, logically, sure, you have a latch that's activated by the release of the first button, and is de-latched by the second. Easy peasy!

Tons of Thanks in advance guys! (and/or gals)

Bradman175 is on the right track, but perhaps a diagram that shows what he's talking about would help: 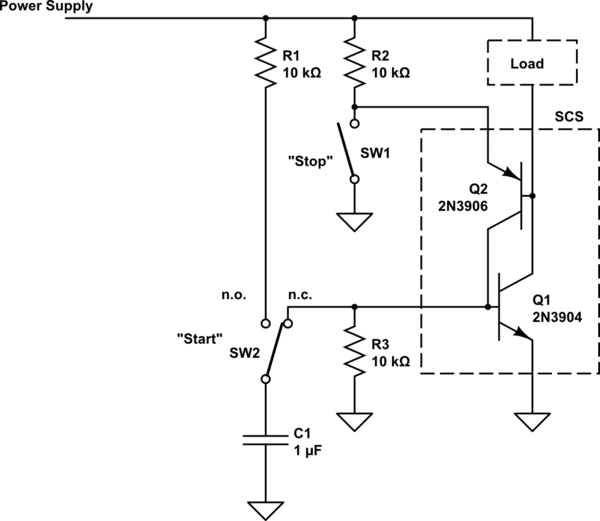 Here is one of many possible solutions. This one is very straight forward and uses 1/2 of two edge-triggered D-flip-flops inside a 74HC74 IC.

Basically, whenever there is a rising edge on its CLK (clock) input the flip-flop transfers whatever is at the D (data) input to its Q output. Here, D is tied to VDD so it is always logic 1.

When START button is pressed, nothing will happen because CLK only responds to a positive (rising) edge. When START is released, R1 pulls CLK high and the flip-flop transfers the 1 at the D input to its Q output. Additional presses on START do nothing since Q is already high.

When STOP is pressed, /CLR is pulled low and clears the flip-flop so Q goes low. /CLR input is negative logic (denoted by the bubble/circle on the input). 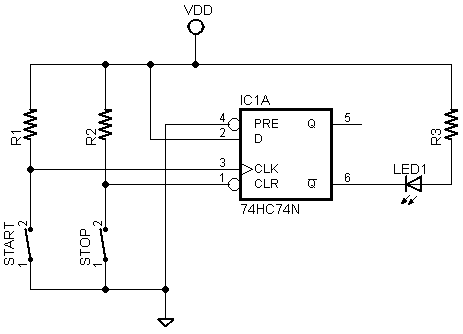 Note that the LED is wired to /Q. /Q is the complement of Q. But the LED is powered from VDD so it still lights up when Q goes high. The reason this is a bit better configuration is that most CMOS ICs can drive low better than high.

Also, if the user is pressing the START and STOP at same time, the STOP always overrides the START button and holding STOP down will cause it to ignore START signals. I think this is what you would want if it was controlling some kindof machinery. You always have to design your circuits to take unexpected inputs from users. Hope that helps, -Vince

You basically want to use an arrangement of transistors along with a circuit called the silicon controlled switch. You want a SPDT button that charges a capacitor. When released, the capacitor would go where the on button is to latch the SCS on. Then you can use the off button to turn the SCS off. The motor in the diagram is the load.

Not the answer you're looking for? Browse other questions tagged flipflop 555 latch or ask your own question.

0
556 dual timer circuit not clear to me
0
latching with a timed relay
5
Reset 555 timer when trigger switch is released
0
555 auto-off timer circuit validity
2
Power & Reset in momentary switch in analog circuit
0
Why isn't my 555 cascading timer working?
1
Mono and Astable multivibrators not working when connected together
0
How to make a circuit to pulse an output when a momentary switch is released