How to reduce current in this circuit?

I have the following circuit and I want to reduce the current consumption to the lowest possible. Basically, I have a series voltage regulator whose output is connected to a transistor to switch on the OpAmp using the micro-controller(uC). 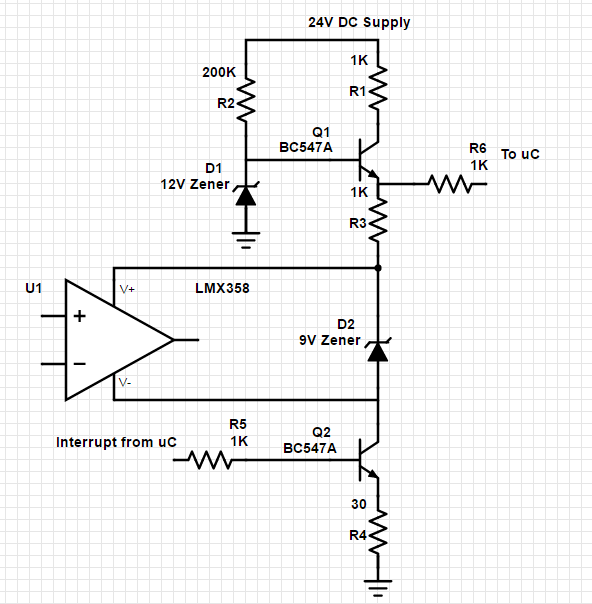 So, I think I can conclude what's wrong with the circuit in an answer after having discussed it in the comments:

As usual, pick the right components for your job based on what they need to do. If you can restrict the bandwidth you need from the opamp to a couple kHz and the gain to a couple V/V, you can easily drop in a nA-quiescent-current opamp.

There are so many issue, it's hard to decide where to begin. To be clear, here is the circuit you propose:

Apparently you ultimately want to switch the low side power of a opamp, with the high side at about 9 V when on. Your circuit raises the high side of the power to about 12 V when off, but I'll assume that's just a accidental byproduct of the strange design and not a real requirement. The only available supply is +24 V.

Issues with your design are:

However, the LM358 is a old opamp and draws up to 2 mA just for internal use. There are newer opamps that should be usable here.

Ideally, use a opamp that can run from 24 V directly. That simplifies things considerably.

For example, it makes little sense worrying about a extra 500 µA when the battery self-discharge is 3 mA, or the microcontroller draws 10 mA. Again, you have to look at the whole circuit, and perhaps different topologies, not just different parts.

The LMX358 has an absolute maximum power rail specification of 8 volts so using a 9 volt zener diode is a poor choice. The circuit is fatally flawed (because the voltage applied will be greater than 8 volts) and this needs to be fixed first.

So, in the absense of any data about what the op-amp is intended to be used for there is no point trying to reduce power supply current. Fix the design by specifying what the design is intended to do, show the connections to the LMX358 and then we can proceed.

Not the answer you're looking for? Browse other questions tagged transistors voltage-regulator current-limiting or ask your own question.