I am writing a program on STM32F4 Discovery where I have to store address of Timer's CCR register into a pointer and then change register via this pointer, ie

When I test this alone in an "empty program" it works, but when I use my entire program (along with all other features I implemented) it causes hard fault at one of those assignments. Now Im figuring out whether its my other code which displaces something in memory or I'm saving register address the wrong way and it only shows when more complex program is loaded. In documentation I read

The simplest way to implement memory-mapped variables is to use pointers to fixed addresses.

The variable port is a constant pointer to a volatile unsigned integer, so we can access the memory-mapped register using: 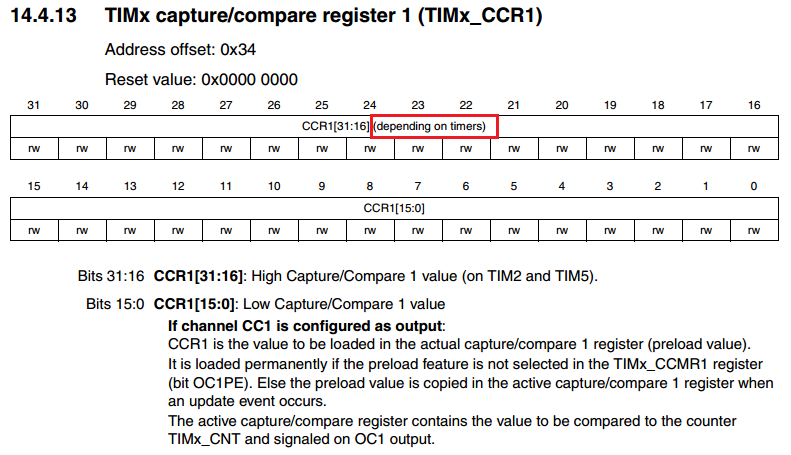 so now I'm not certain, is the register always 32-bit and only 16-bits are used in some timers or is register in some cases 16-bit only and I have to use 16-bit pointer to write to it?

In any case, I would like to know what is the proper way of saving timer CCR register to a variable. If I second click on CCR1 in following command

At its most basic way, you cast the address as a "pointer to 32 bit value", dereference it and get the value.

(int*) is the casting, making the number a pointer which points to an int type.

0x40000800+0x34 is in the parenthesis to prevent an addition error. Casting has predecence over addition and addition an integer to a pointer not the same as addition of integers.

For taking a step further, define the peripherals as structs. It has to be guaranteed by the compiler that it will take place in memory as the sequence you write. Don't forget that structs are virtual definitions like 'int'. For example:

When you make a pointer which points to that struct (so not an int type this time), for example:

You can reach its elements without hassle. For example:

Or, for an easier scripting;

To make things easier just turn it into a definition:

So now it is just

and this is simply an unsigned 32 bit value. The value in the register might be 16 bit or 8 bit, that is not a problem. The important thing is their allocation width and you design the struct according to that. All the elements of structure are uint32 because they are all 32 bit allocated.

Not the answer you're looking for? Browse other questions tagged timer register addressing stm32f4-discovery or ask your own question.