Several years ago I attempted to build a coil gun, but gave up in frustration after burning out several SCR's when designing the trigger circuit. The SCR is used as the switch that dumps the energy stored in the capacitor into the coil.

I've since brushed up on my fundamentals and tackled the problem once more. Below is the circuit I've come up with. 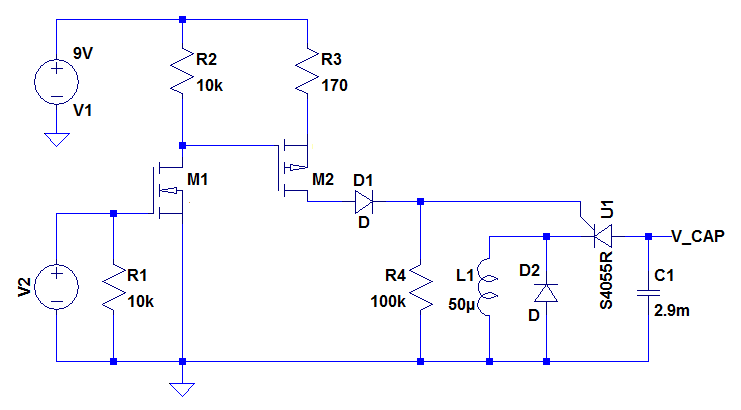 V2 applies a 3.3V, 10ms pulse to the gate of M1. This pulls the gate of M2 low and causes current to flow into the gate of the SCR. Since V2 is a logic-level signal, I used this configuration so I could drive M2 without needing a level-shifter. R1

R3 is a current limiting resistor used to limit the gate drive current to 40mA, which is the rated maximum gate current required to turn on the SCR.

R4 is used as a pull-down resistor to prevent spurious signals from triggering the gate of the SCR.

Since C1 is charged to 200V, I've included D1 to prevent the drain of M2 from seeing large voltages when the SCR is triggered.

L1 is the coil and D2 is used as a flyback diode to prevent reverse charging of C1.

I know I've left out some details, but is the overall design of this circuit good practices?

The major problem appears to be that your SCR Cathode will start to rise as the device turns on and critically reduce the gate drive. You certainly won't meet the minimum t(gt) of 2 uS and may find the SCR turns on very slowly.
You should move the SCR to the ground side of the inductor. 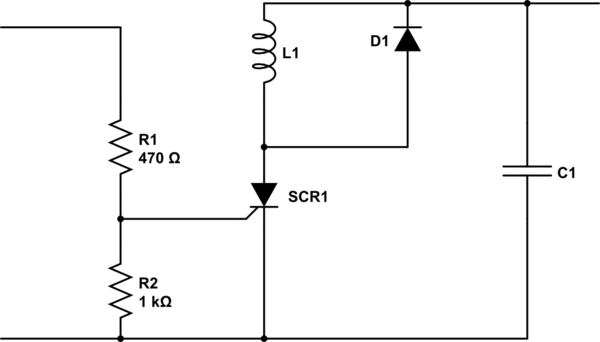 I haven't scrutinized your triggering circuit and won't dwell on it as it may be somewhat secondary to your SCR burn out problem (the trigger circuit does seem unintuitive). You have not indicated the nature of and how the capacitor charging source V_CAP is connected. If V_CAP is a DC source with no zero crossings and remains connected to the capacitor when the SCR is fired, the SCR will remain in conduction once triggered, ultimately allowing a steady DC current to flow through the SCR and coil and likely destroying the SCR (essentially a short of the SCR). If V_CAP is isolated from the capacitor prior to triggering the SCR, then you should not suffer from SCR burnout (assuming that withstand voltages are respected).

A resistor in series between V_CAP and the capacitor may be desirable to limit charging current to something reasonable.

I had a slight brain lapse. I was thinking triggered circuit where the capacitor dumps its energy into a circuit where the energy is dissipated (flash lamp or capacitor discharge ignition). Your circuit has no apparent resistive load so is theoretically a resonant undamped circuit. The resonance means that the current will cross through 0 so the SCR will attempt to cease conduction. Have a look at this discussion of a resonant LC circuit with an initial voltage on the capacitor:

Of course, there is no such thing as zero resistance. However. ignoring resistance, your peak sinusoidal current is 7.61xV_CAP (based upon 50 uH and 2900uF). If your V_CAP is 20 volts, your 'theoretical' rms current would be 107 amps. That might exceed the rms value of the SCR; but, probably not the non repetitive (single half cycle) surge current of the SCR since the current should extinguish at the first current 0 crossing. However, if the gate circuit remains high during this, it is not immediately obvious how this effective 1/2 wave circuit is going to operate. Modeling with SPICE might prove some insight:

In the case with no D2 and assuming no resistance in the inductor - capacitor circuit.

The other thing to consider is that if this nail coil is actually 'doing anything', there will be an effective load resistance in parallel (or series depending on how you model it) with the inductor. If the load is large (parallel resistance is low), the circuit may become over damped in which case the current in the inductor will reach a peak and then may decay exhibiting no oscillation.

Not the answer you're looking for? Browse other questions tagged mosfet scr or ask your own question.